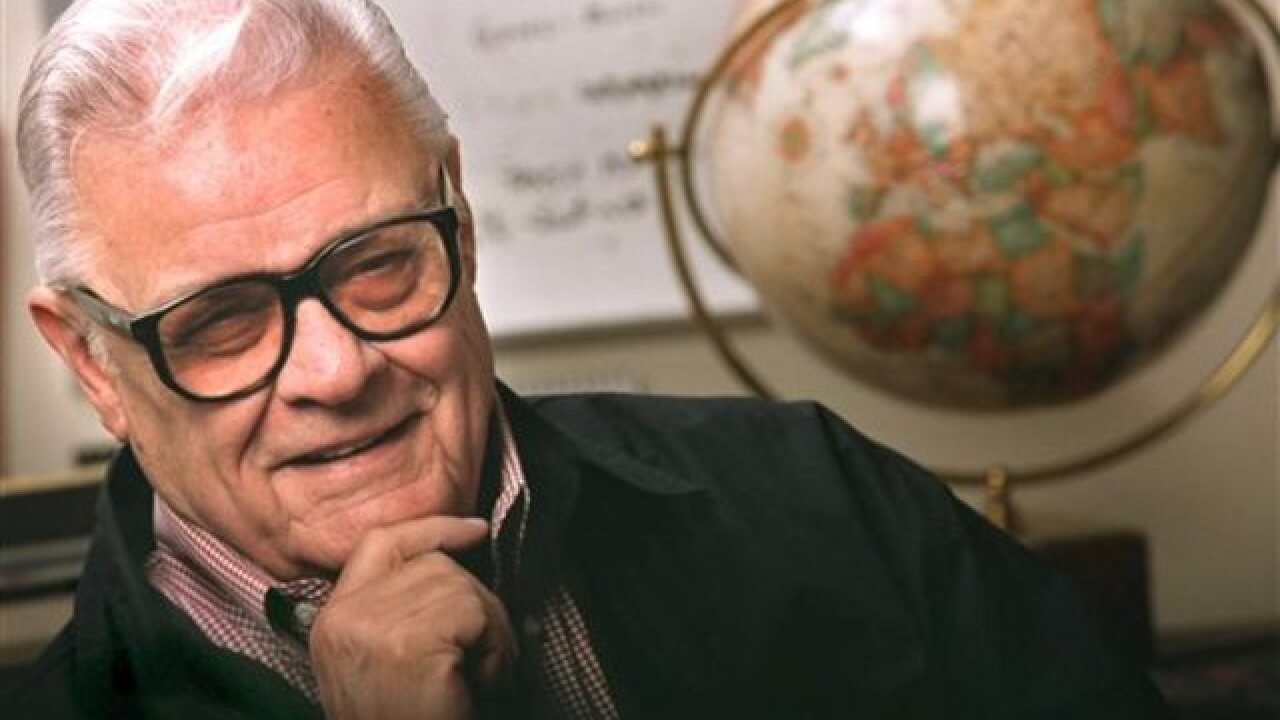 Jim Mahoney
<p>In this 1999 photo, Blackie Sherrod poses for a photo in Texas for a story on him at the time of his 80th birthday. Sherrod, the longtime Texas sports writer revered for his dry wit, died Thursday, April 28, 2016, at his Dallas home after a week in hospice care, wife Joyce Sherrod told The Dallas Morning News. He was 96. (Jim Mahoney/The Dallas Morning News via AP) MANDATORY CREDIT</p>

DALLAS (AP) — The East Coast had Red Smith. The West Coast had Jim Murray. Texas had Blackie Sherrod.
Sherrod, the longtime Texas sports writer revered for his dry wit, died Thursday afternoon at his Dallas home after a week in hospice care, wife Joyce Sherrod told The Dallas Morning News. He was 96.
A mentor to some of the nation's top writers, Sherrod was Texas Sportswriter of the Year a record 16 times and a Red Smith Award winner for lifetime achievement in sports writing.
His trademark was the use of a country-fied Texas vernacular — sort of Damon Runyon or Ring Lardner by way of Jett Rink. His flagship fixture was his weekly "Scattershooting" column of brief nuggets of news, commentary and witticisms that ran in Sunday editions.
It was a career that launched on a modest note. He was born William Forrest Sherrod in the Central Texas town of Belton of a barber father and a mother who taught music. He played football at a small Central Texas college until a hip injury finished him. It was while playing that his coach nicknamed him "Blackie" because of his deep tan.
He began his newspaper career as the unpaid Belton correspondent for the nearby Temple Telegram before going off to serve as a Navy torpedo plane tail gunner in the South Pacific in World War II. He returned to the Temple Telegram briefly before moving to Fort Worth in 1946, where he briefly wrote radio newscasts and police news for the now-defunct Fort Worth Press before moving to the newspaper's small sports department. He was promoted to sports editor in the early 1950s.
Like other departments at the underfunded afternoon daily, Sherrod had to operate his sports department with a beggar's bowl. In a 1975 profile in Texas Monthly magazine, Sherrod told author Larry L. King that "when pencils wore down to nubs you were expected to tape the two shorties together and make-do with the lead at both ends. Then you had to turn in the nubs to get a new pencil."
He spotted future author Dan Jenkins' work in his Fort Worth high school newspaper and hired him for $15 a week. Jenkins worked his way through Texas Christian University and remained at the Press long enough to succeed Sherrod as sports editor in 1958, a job Sherrod told King "was about like being the lookout at a prairie dog colony." Jenkins also lured a buddy, future author and screenwriter Edwin "Bud" Shrake, to the Press.
Sherrod took his popular column in 1958 to the now-defunct Dallas Times-Herald in 1958, where he also helped cover the 1960 Democratic National Convention, the 1963 assassination of President John F. Kennedy and the 1969 Apollo 11 moon landing, for which he won a Texas Headliners Club award for science writing.
The Dallas Morning News hired away Sherrod from the Times-Herald in 1985, and he continued his column until retiring in 2003, a move he regarded with mixed emotions.
"Retirement is like a steam bath," he said in his last "Scattershooting" column. "Once you get used to it, it's not so hot."
Associated Press 2016