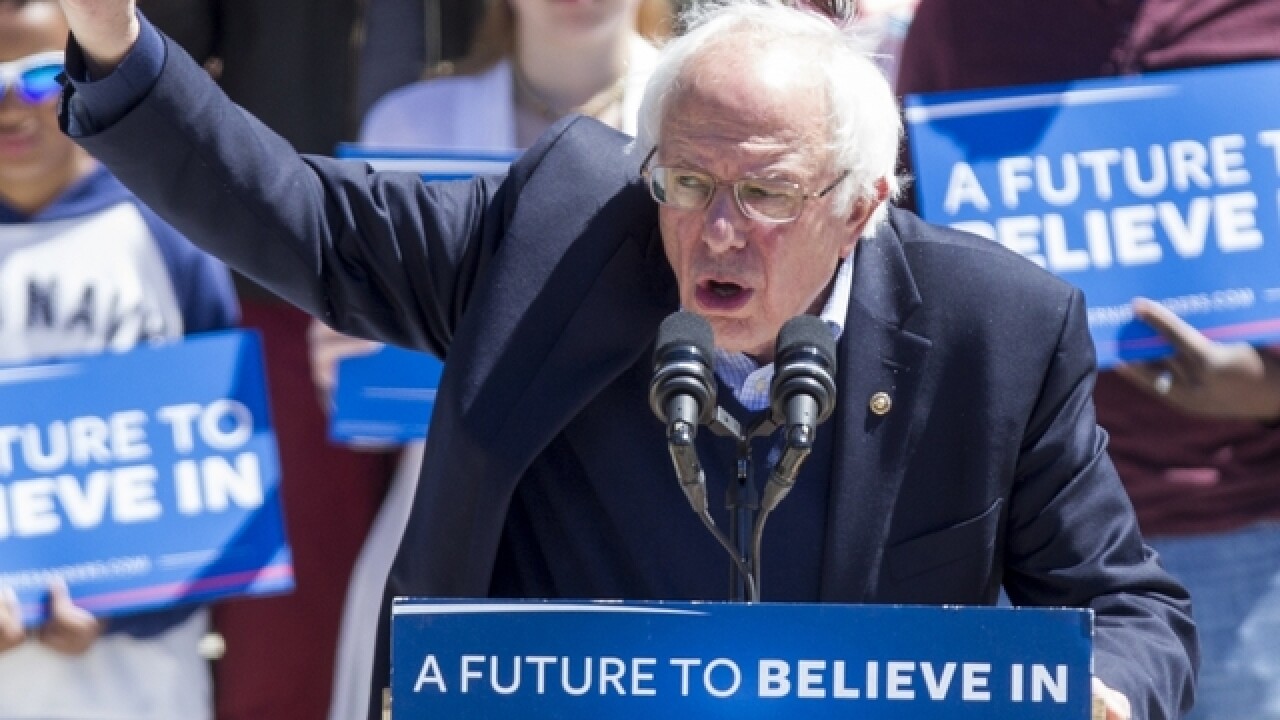 WASHINGTON (AP) — Bernie Sanders' movement for a political revolution is reaching a crossroads even as he promises to campaign against Hillary Clinton through the June primaries and into the Philadelphia convention.

The Vermont senator said in an interview with The Associated Press after losses to Clinton in Tuesday's primaries in Pennsylvania, Maryland, Delaware and Connecticut that he would now seek as many delegates as possible to "fight for a progressive party platform," acknowledging that he had only a "very narrow path" to the nomination.

"Every person in this country should have the right to vote for whom they want to see as president of the United States and what they want to see the agenda, Democratic agenda, look like," Sanders told The AP late Tuesday.

Sanders said at a rally at Purdue University in Indiana on Wednesday that he was "in this campaign to win and become the Democratic nominee," adding, "If we do not win, we intend to win every delegate that we can so that when we go to Philadelphia in July we're going to have the votes to put together the strongest progressive agenda that any political party has ever seen."

Yet the implication of Tuesday's losses was evident Wednesday, when the campaign said it was laying off "hundreds" of field staffers and other aides to focus on winning the California primary on June 7.

The campaign will have gone from a staff of more than 1,000 in January to about 325-350, spokesman Michael Briggs said.

"We will continue to have a strong and dedicated staff of more than 300 workers who are going to help us win in California and other contests still to come," said spokesman Michael Briggs.

Sanders won the Rhode Island primary on Tuesday, adding to his trove of more than 1,300 delegates, but his loss in New York last week and Tuesday's defeats in the delegate-rich states of Pennsylvania and Maryland are likely to change the focus to shaping the Democratic platform, Clinton's policy agenda and his movement to address income inequality and the campaign finance system.

Sanders hopes to score a victory in next week's Indiana primary and is looking ahead to upcoming contests in Oregon and California, but he remains about 300 pledged delegates behind Clinton. He has vowed to compete until the final District of Columbia primary in June.

Clinton's campaign and Democratic leaders are watching closely to see if Sanders will continue to raise issues that could damage Clinton's chances in November or whether he will encourage his youthful following to support Clinton.

"I would hope that there is a beginning of a pivot for him to make it really clear to his supporters what's at stake against the Republicans," said former Michigan Gov. Jennifer Granholm, who supports Clinton.

Clinton's allies note that Republican Donald Trump has been co-opting Sanders' pitch against Clinton, which the businessman acknowledged Wednesday.

Former Pennsylvania Gov. Ed Rendell said Sanders had every right to compete until the end of the primaries, as Clinton did in 2008. But he expressed hope Sanders would point out their differences but "not assail her judgment or character anymore."

Rendell, a Clinton supporter, said that could undermine Sanders' effort to address wealth inequality and campaign finance reform. "If he believes what he's talking about, he's got to understand that he's got to help her by toning it down," Rendell said.

At rallies, Sanders has sent mixed signals during the past week over whether he will ease up on Clinton. He has demanded that Clinton release the transcripts of her lucrative private speeches to Wall Street, a point he made in Indiana, and has critiqued Clinton on other issues like trade and the war in Iraq. But in other events Sanders has largely steered clear of Clinton, focusing instead on Trump.

In the AP interview, Sanders bristled when asked if he would continue to contrast his record with Clinton's. "Of course. I'm getting attacked by Hillary Clinton and her surrogates every damn day. Every day we're getting attacked and our record is being distorted," he said.

"We are trying to run an issue-oriented campaign and a campaign means that you talk about your record, what you believe in, as opposed to your opponent's. That's what Clinton does. Of course we're going to do that," he said.