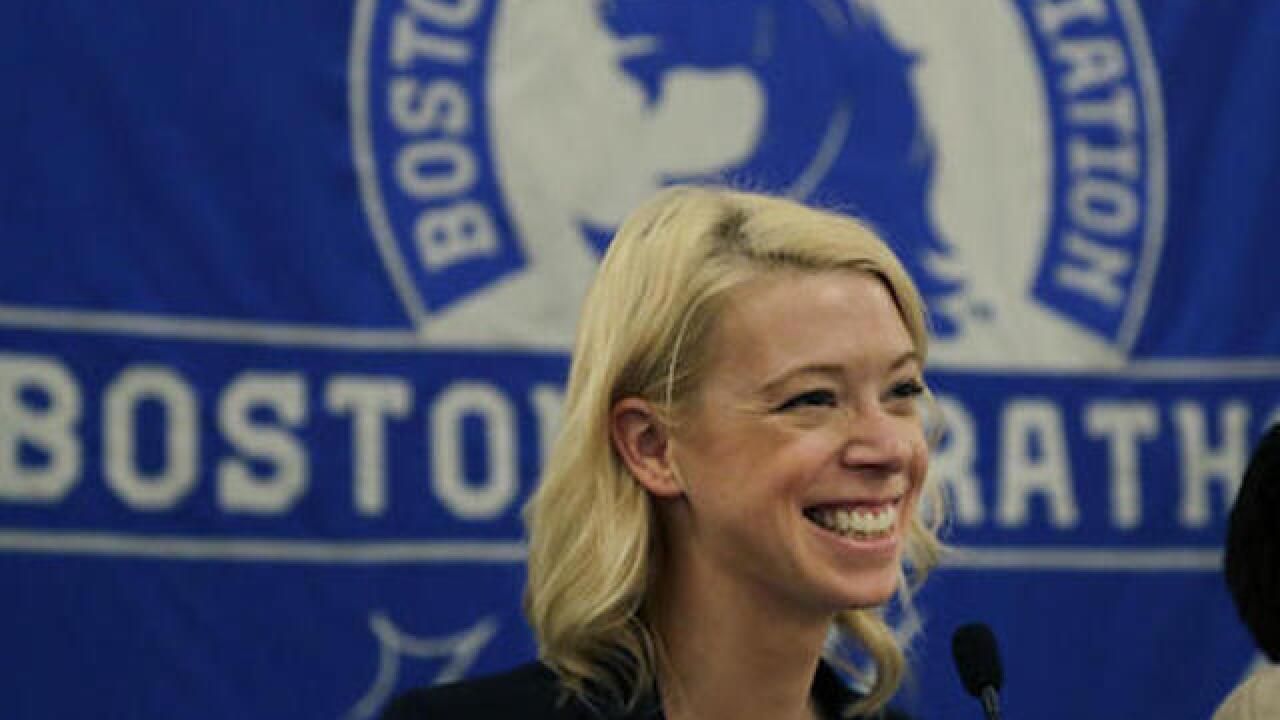 Elise Amendola
<p>In this photo taken Thursday, April 14, 2016, Adrianne Haslet, a 2013 Boston Marathon survivor, speaks at a news conference, Thursday, April 14, 2016, in Boston after receiving the Patriots' Award, which is annually given to a New England-based individual, group, or organization that is patriotic, philanthropic, and inspirational, and fosters goodwill and sportsmanship. (AP Photo/Elise Amendola)</p>

BOSTON (AP) — Adrianne Haslet heard all the talk about taking back Boylston Street in the years after the Boston Marathon bombings.

After losing her left leg in the 2013 finish-line explosions, Haslet decided that she would return to the course — this time as a runner. When the race leaves Hopkinton on Monday, Haslet will be one of 31 members of the One Fund community — survivors of the attacks, their families and supporters— who will be in the field.

More than 30,000 runners are scheduled to head to Hopkinton for the 120th edition of the race this Patriots Day. Among them are Haslet and Patrick Downes, a Boston College graduate who had his left leg amputated after the bombings.

Downes, 32, was a runner before the bombing, having completed the race in 2005 with his wife, who lost both legs in the attacks.

Haslet, 35, was a professional ballroom dancer who received a prosthetic blade to the quickstep and the jive, and only then decided to take up running.

Haslet overcame a hip flexor injury while training; running with the blade also requires extra energy, because one leg is slightly longer than the other. She will run with a team of four people on behalf of the Oklahoma City-based Limbs for Life Foundation, which provides prosthetics for those who can't afford them.

"It was about finding another challenge, and finding a new day," she said. "There was a point in my life I wasn't a ballroom dancer, either."

Three years after the attacks, the Boston Marathon is returning to its new normal, with more security and more runners but the focus returned to the race itself.

Here are some more things to look for in this year's race:

But most of the top Americans will sit out the race, having run in the U.S. Olympic Trials in Los Angeles in February.

The Boston Athletic Association is commemorating the 50th anniversary of the first woman to complete the Boston Marathon.

Bobbi Gibb sneaked onto the course in 1966 to break the race's gender barrier. She also ran the race in 1967-68 and has been recognized as a three-time winner in the "Unofficial Era." Race organizers said last week they would now acknowledge her accomplishments as part of the "Pioneer Era."

A member of the Narragansett Tribe in Rhode Island, Brown's 1936 victory is best remembered for the coining of the term "Heartbreak Hill." Defending champion Johnny Kelley tapped Brown on the back as he prepared to pass him, but Brown responded by accelerating into the Newton hills on his way to victory. He also won in 1939.

At the time, Native Americans were widely perceived as lazy, according to Mikki Wosencroft, who will serve as an honor runner for Brown this year.

"He broke a lot of barriers in the way Native Americans were perceived," Wosencroft said, "and he did it with ease."

Meb Keflezighi, who in 2014 became the first American man or woman to win the race since 1985, is resting up for the Rio Olympics. So are Desi Linden (fourth last year) and Shalane Flanagan (ninth), with Amy Cragg.

That leaves Neely Spence Gracey, who is making her marathon debut, as perhaps the best American hope to reach the podium.

Gracey, 26, of Superior, Colorado, is an eight-time NCAA Division II national champion who decided last fall to try the 26.2-mile distance. A problem with her left foot kept her from running in the trials, putting her on schedule instead for Boston.

The daughter of 1991 world championship bronze medalist Steve Spence, Gracey was almost destined to run Boston. Her father finished 19th — the No. 2 American overall — in the 1989 Boston Marathon, and Gracey was born on Patriots Day in 1990 while her father was running the race.

"I grew up hearing all about that story," she said. "I always knew once I started running competitively that I was going to be running Boston. But I didn't know it would be this soon."