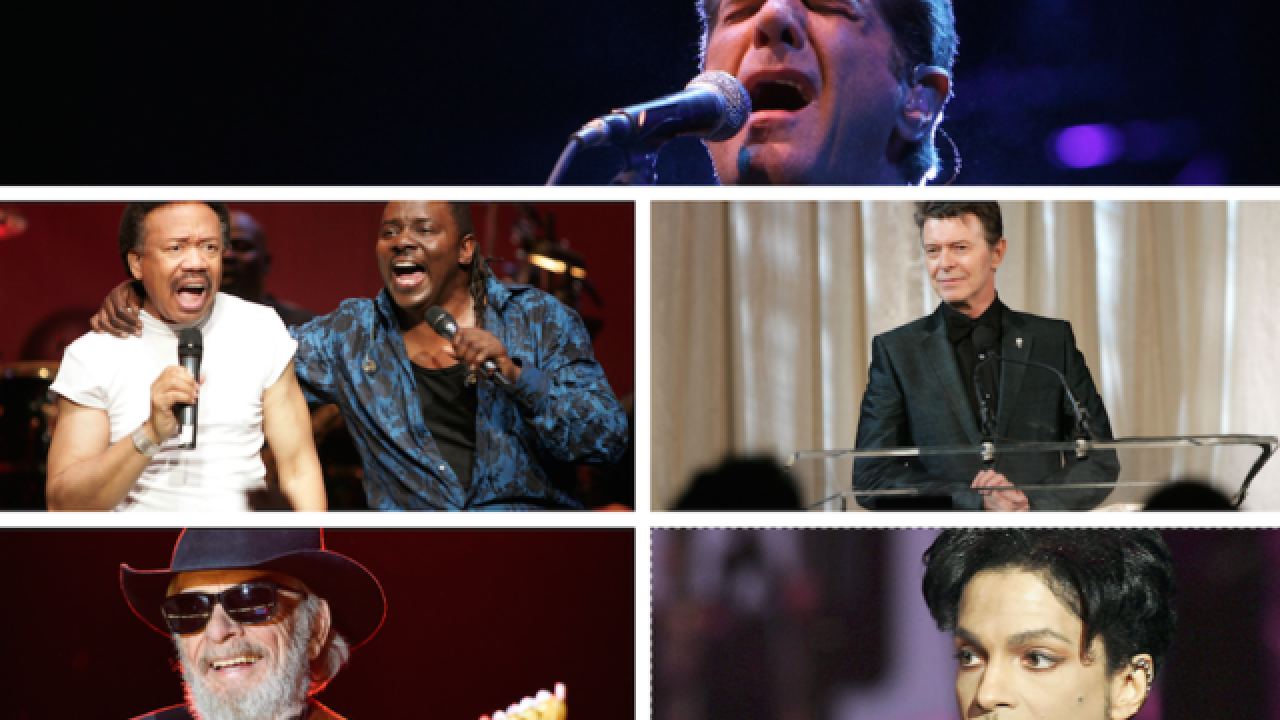 In fewer than four months, the world has lost an elite group of musicians who have combined for four Rock and Roll Hall of Fame inductions, three Grammy Lifetime Achievement Awards and 25 Grammys.

Prince, a winner of seven Grammys, died Thursday at his home in Minnesota. He is the most recent of five prominent musicians who have died since January.

David Bowie passed away on Jan. 10 at age 69. Bowie won his only Grammy in 1985 for the video "Jazzin' for Blue Jean." Bowie was nominated 10 times for a Grammy.

He was best known for collaborating with Queen for the hit "Under Pressure," along with hits "Fame," "Blue Jean," and "Let's Dance."

Bowie produced a number of gold and platinum selling albums. His latest album, Blackwater, was released two days before his death. It reached No. 1 in the United State and United Kingdom.

In a nod to Bowie's passing, Prince covered another Bowie hit "Heroes" at what turned out to be his final concert in Atlanta last week.

Bowie passed away from liver cancer in New York City.

Glenn Frey passed away eight days after Bowie in Detroit from natural causes. Frey died at age 67, and was still actively touring with The Eagles up until his death.

Frey had success both as a solo artist as well joining with the Eagles. With the Eagles, he joined other legendary artists Don Henley, Joe Walsh and Timothy B. Schmitt.

As a solo artist, Frey produced a pair gold-selling albums. With the Eagles, the band sold six No. 1 selling albums in the United States. The band also had five Billboard Hot 100 No. 1 songs.

The group was inducted into the Rock and Roll Hall of Fame in 1998.

Maurice White  died on Feb. 3 at age 74 after a long battle with Parkinson's disease. White was one of the founding members of the band Earth, Wind and Fire, which produced hits such as "September" and "Shining Star."

Among the seven Grammys he won with Earth, Wind and Fire, he earned a Grammy for Best Arrangement Accompanying Vocalist for "Got to Get You into My Life."

Despite White's death, Earth, Wind and Fire continues to tour.

Merle Haggard died on April 6, exactly 79 years after he was born in Palo Cedro, Calif. Along with earning a Grammy Lifetime Achievement Award in 2006, Haggard was inducted into the Country Music Hall of Fame and Museum in 1994.

Haggard produced the "Okie from Muskogee" album in 1969, which soared to No. 1 on the country charts in 1969. Haggard also collaborated with other top artists including George Jones and Willie Nelson.

Prince died in his home in Minnesota on Thursday, one week following a pair of concerts in Atlanta. Prince received treatment last week for flu-like symptoms on his way back to Minnesota from his Atlanta concerts.

Among the 32 Grammy nominations Prince received, he won seven Grammys. He also won an Academy Award in 1985 for the Best Original Song Score for his hit "Purple Rain."

Prince sold more than 100 million albums as an artist. Prince had four hits that peaked at No. 1 in the American Billboard charts.