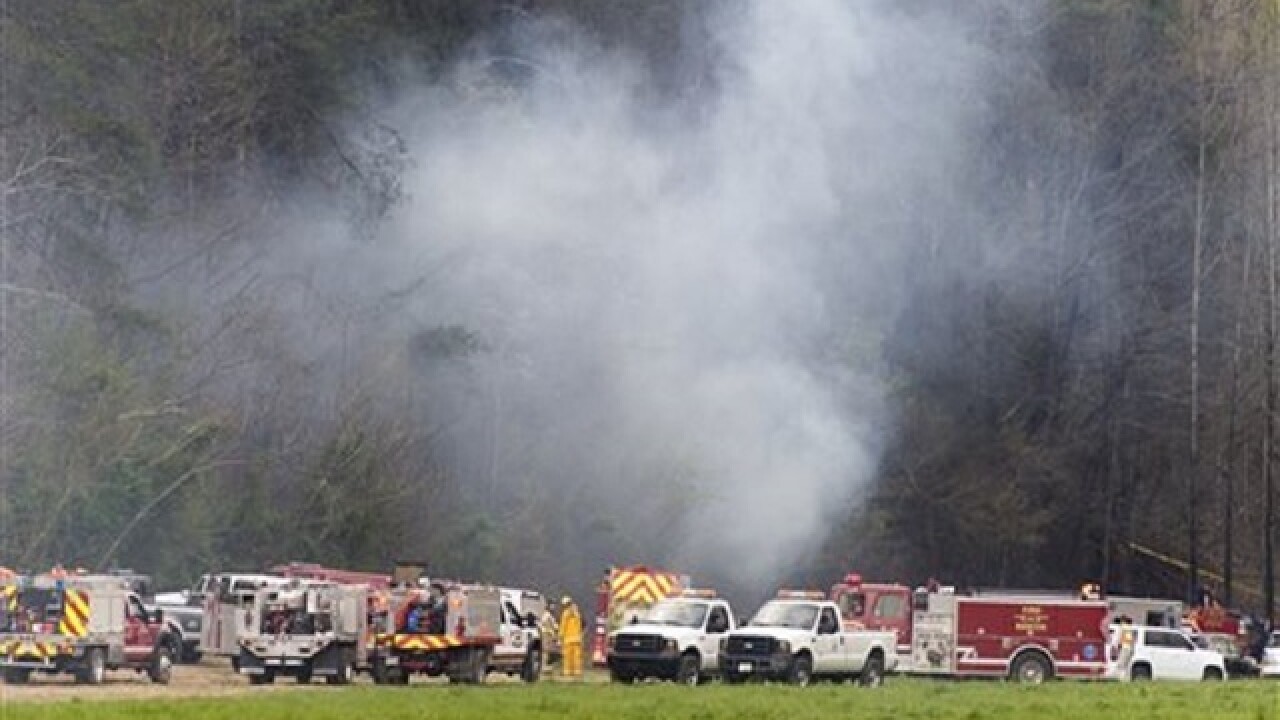 The Bell 206 helicopter crashed Monday around 3:30 p.m. near Sevierville, Federal Aviation Administration spokeswoman Kathleen Bergen said in an email. Officials said the tourist helicopter was destroyed by fire after the crash.

"There's not much left of the helicopter," Pigeon Forge Police Chief Jack Baldwin said. "It's pretty much gone from the fire."

Baldwin said the helicopter appeared to come down the side of a mountain and crash at the foot of it.

"There's a little bit of the tail fin of the helicopter, and that's about all that's left, that and the console, that's about it," he said.

About four hours after the crash, more than a dozen emergency vehicles were at the site, which is less than a mile from a large outlet mall in Sevierville and adjacent to a neighborhood off the main tourist drag. The site is about three miles from Dolly Parton's Dollywood theme park.

Smoke billowed over the wooded area. The Pigeon Forge Fire Department said it had units at the scene.

Shawn Matern said he was inside his parents' house when he heard a loud boom. "That's when we came out and saw the second explosion right before our eyes," he said.

He said he saw the pilot roll out of the burning helicopter on the ground and a neighbor went to try to help.

Matern said the tour helicopters fly over at least three or four times a day in that area.

Tennessee Emergency Management Association spokesman Dean Flener confirmed late Monday afternoon that five people had died. Flener said no homes were damaged and no one on the ground was injured when the helicopter went down.

National Transportation Safety Board spokesman Chris O'Neil says two investigators from the agency were headed to the scene of the crash.

Representatives from Bell Helicopter, Textron Aviation, Rolls Royce and the FAA were also going to the scene.

Gary C. Robb, a Kansas City attorney who wrote a book on helicopter crash litigation, said it was far too early to determine the cause of the Sevierville crash, but some helicopter tour operators have been known to be reckless to "thrill the tourists" by flying too close to trees or waterfalls or by dangerous maneuvers.