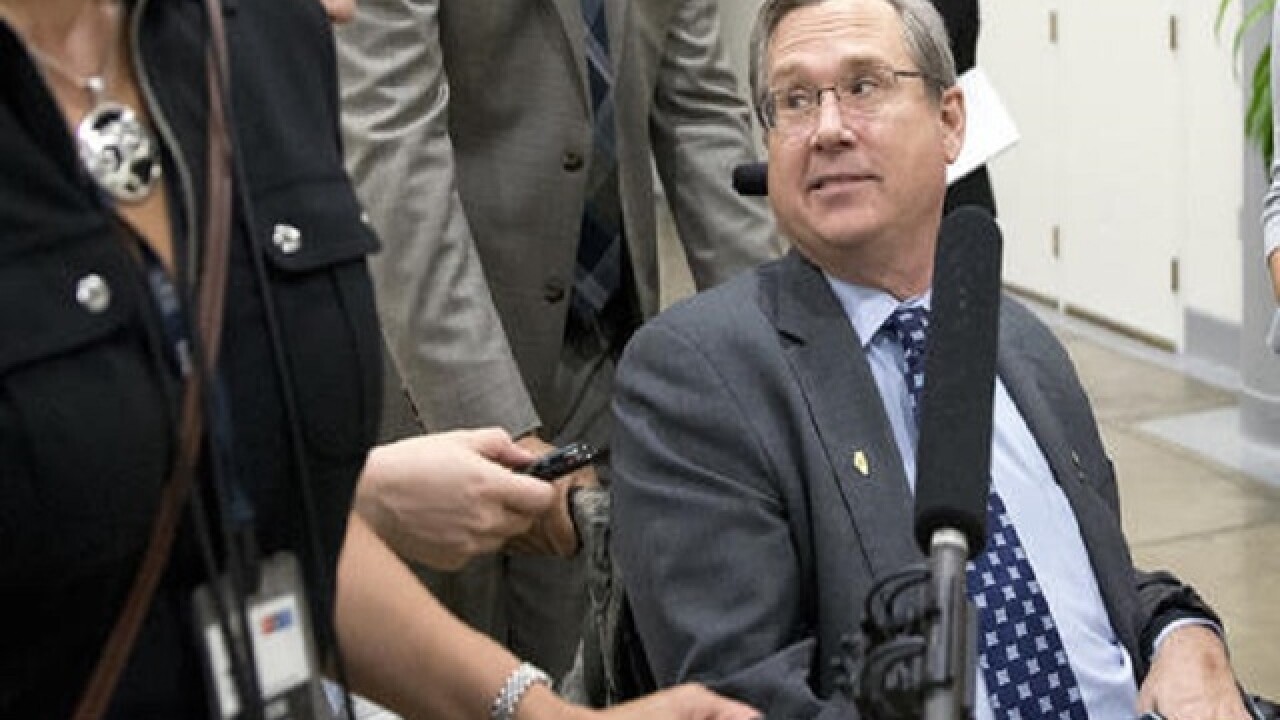 CHICAGO (AP) — Two Illinois Republicans considered among the nation's most vulnerable congressional incumbents are breaking from their party and its outspoken presidential nominee, Donald Trump, to push laws that would include a path to citizenship for people living in the country illegally.
Rep. Bob Dold and Sen. Mark Kirk joined GOP Rep. Mario Diaz-Balart of Florida and business leaders at an event Wednesday in Chicago. They argued comprehensive immigration reform would help the economy, ensure companies have the workers they need and is the right thing to do.
"It's about people before politics," said Dold, whose district north of Chicago is home to large numbers of Hispanic voters and Fortune 500 companies. "We need to fix a broken system."
Immigration has been a tricky issue for Republicans, particularly as the electorate has grown more and more diverse. After a dismal showing at the polls in 2012, leaders said the party must become more inclusive if it is to win back the White House. The following year 14 Republican senators voted for an immigration overhaul proposal that stalled in the House. The measure would have strengthened border security, increased visas for legal immigrants and given some 11 million undocumented immigrants a path to become citizens.
The 14 GOP senators who backed the plan included Kirk and Sens. Kelly Ayotte of New Hampshire and John McCain of Arizona, who also are trying to hold on to their seats in November.
Trump has moved in the opposite direction, saying he wants to build a wall along the U.S. border with Mexico and make Mexico pay for it. He also has called some Mexican immigrants rapists and promised to deport millions of immigrants living in the U.S. illegally.
Other endangered Republicans have pushed back on Trump's more divisive statement statements about immigration but are still supporting his candidacy.
After Trump said all Muslims should be banned from entering the U.S., Ayotte said she opposes any "religious-based test for our immigration standards." Republican Sen. Rob Portman of Ohio blasted Trump for saying a federal judge of Mexican descent couldn't be impartial because of Trump's proposal to build the wall.
The pushback has been particularly strong in left-leaning places such as Illinois, where in recent years lawmakers have approved driver's licenses and extended health care for some immigrants who are in the country without legal permission.
Even Bill Kunkler, an executive vice president at a Chicago company who has faithfully voted for Republicans for president his entire adult life, called Trump's comments about immigrants "ugly and hateful" and predicted it will hurt Republicans in November.
"I hope Trump and his supporters are humiliated at the polls," said Kunkler, who attributes his success in business to the Mexican immigrants who worked beside him in his early years supervising an Illinois quarry.
Dold, who's in a rematch with Democratic former U.S. Rep. Brad Schneider, has said he won't support Trump. Kirk, facing a difficult challenge from Democratic U.S. Rep. Tammy Duckworth, first said he would support the GOP nominee but withdrew his backing in June.
Kirk peppered his remarks at Wednesday's event with Spanish, talking up a program he started to reunite Mexican families by providing visas for people in Mexico to come to the U.S.
But Democratic U.S. Rep. Luis Gutierrez, one of the staunchest pro-immigrant members of Congress, accused Kirk of flip-flopping on the issue and supporting immigration reform only "when it's politically convenient."
Kirk and Duckworth have repeatedly clashed over whether the U.S. should admit refugees from Syria. Duckworth wants the U.S. to accept 200,000 refugees, including 100,000 from Syria. Kirk wants to ban them, saying they pose a national security threat.
He said Wednesday that position doesn't contradict his support for immigrants because "there's a difference between Mexican immigrants and Syrian refugees."
"Syrian refugees might tend toward Islamic terror, and we've never had a Mexican terror problem in this country," Kirk said.
Copyright 2016 The Associated Press. All rights reserved. This material may not be published, broadcast, rewritten or redistributed.