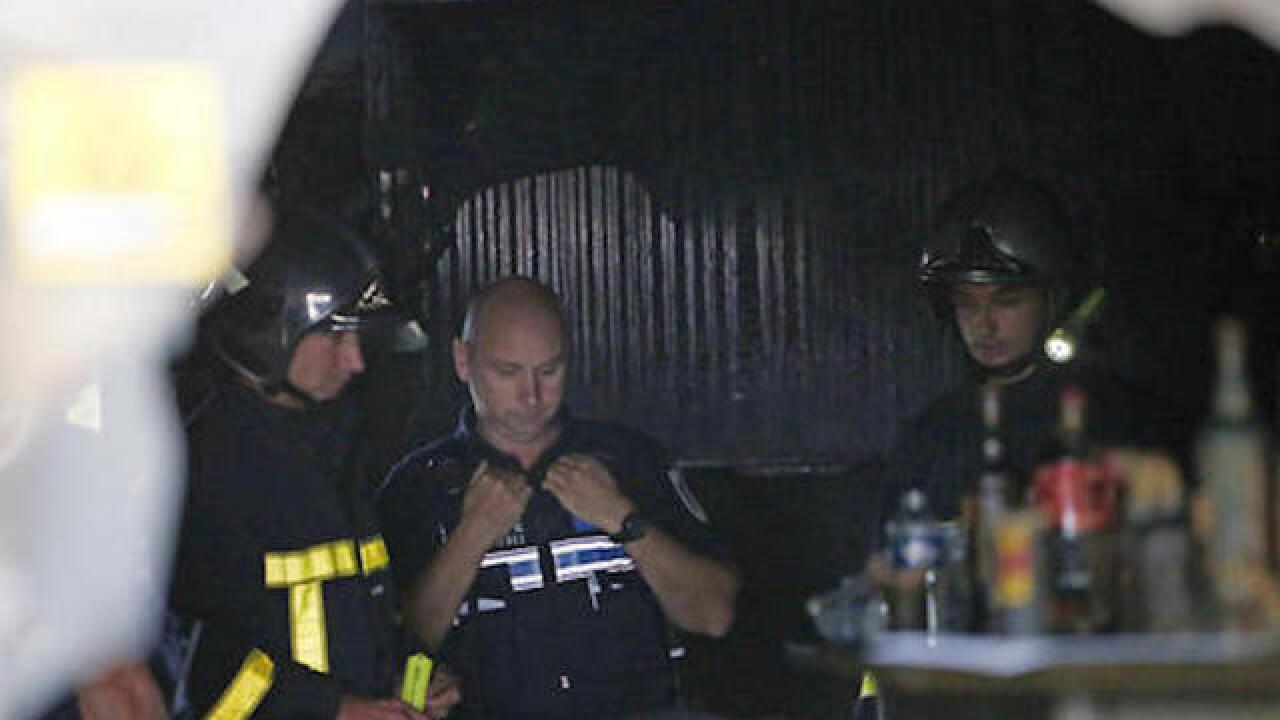 Copyright Associated Press
Kamil Zihnioglu
<p>Firefighters inspect debris in the bar where a fire broke in Rouen, western France, Saturday Aug.6, 2016. A fire swept through a Friday night birthday party at a bar in the Normandy city of Rouen, killing at least 13 people and injuring six others, French authorities said. (AP Photo/Kamil Zihnioglu)</p>

PARIS (AP) — A fast-moving fire that appeared to be accidental swept through a birthday party in a basement bar in northwest France, killing at least 13 people and injuring six others, authorities said Saturday.

The birthday party was "a moment of joy for those involved that ... ended tragically," Robert said.

Vice prosecutor Laurent Labadie told The Associated Press that the first testimonies from survivors and the early police investigation indicated the "fire was completely accidental."

"There was no explosion," Labadie told the AP. "Candles on a birthday cake started the fire after the person who carried it tripped on the stairs leading to the basement."

Labadie said it's still unclear how many people were partying at the Cuba Libre club, adding that most of the dead were between 18 and 25 years old.

In a statement released by the French presidency, Francois Hollande expressed his "solidarity" with the victims' families and vowed that the ongoing judicial investigation will shed light on the "the causes of this dramatic accident."

Labadie said sound-insulating material on the basement's walls quickly ignited and party guests had no time to escape from the basement.

At the scene of the fire, residents paid tribute to the victims by laying flowers. Images on French television from outside the bar showed a large ground-floor window broken open, burned red bar chairs and a tattered awning.

The fire — the deadliest in France since 2005 — came as the country is on maximum terror alert after two deadly attacks last month and was also the second recent tragedy to hit Rouen, a city in Normandy. A priest was slain by two Islamic State extremists in his church outside Rouen on July 26 and his funeral was held Tuesday in Rouen Cathedral.

Interior Minister Bernard Cazeneuve gave an initial count of 13 dead and six injured in the fire, which started after midnight Friday. The prefecture, which runs the region, said one of the six was in a life-threatening condition.

Rouen's archbishop Dominique Lebrun, who led the public service for the slain priest, celebrated a Mass on Saturday for the bar victims and their families, while Prime Minister Manuel Valls expressed his "deepest sadness."

"Young people, some of them very young, had their lives cut short," said French junior minister Clotilde Valter. "These are extremely painful circumstances for everybody."

A bar owner identified as Bruno by French TV BFMTV who was close to the Cuba Libre when the fire broke out said customers were trapped inside because the fire moved too fast.

"It happened in three seconds," he said. "Some customers exited on their hands and knees. Some of them tried to use a fire extinguisher, but it was too late."

In addition to the slaying of the French priest, an IS extremist launched a Bastille Day attack on the famed promenade in Nice, killing 85 holiday revelers with a truck before being shot dead by police.