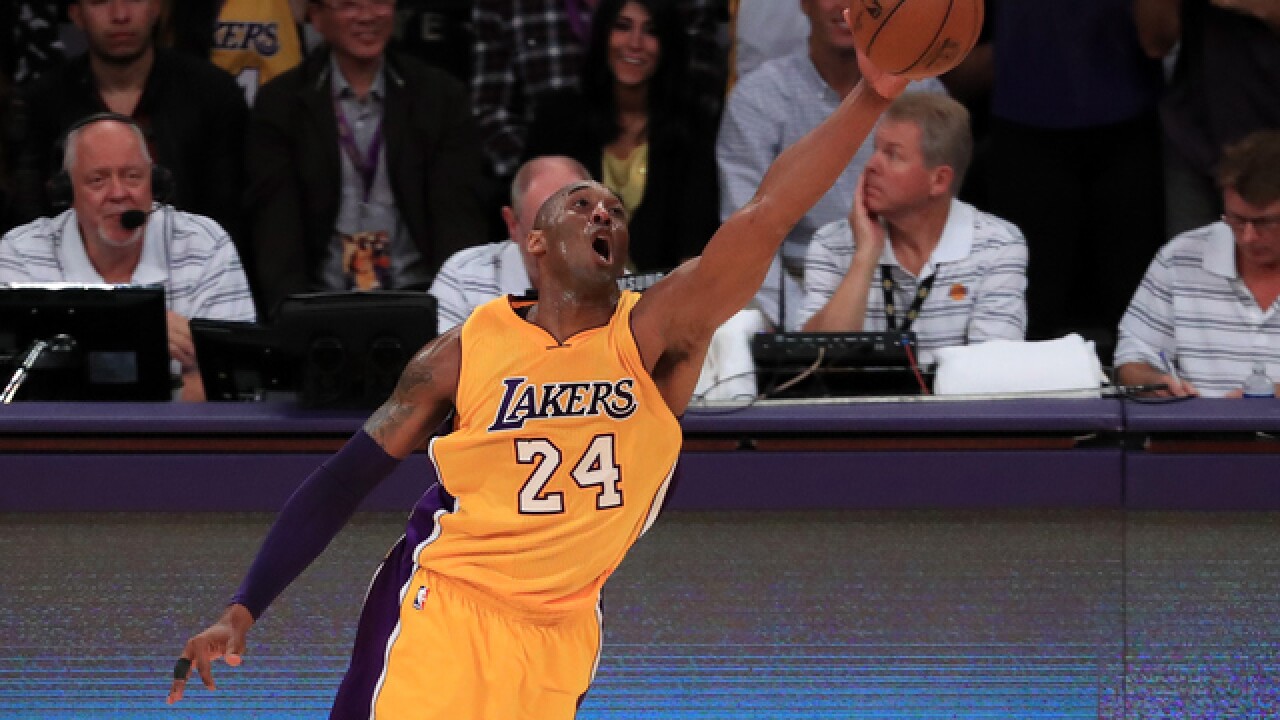 Sean M. Haffey
LOS ANGELES, CA - APRIL 13: Kobe Bryant #24 of the Los Angeles Lakers reaches for the ball in the first half while taking on the Utah Jazz at Staples Center on April 13, 2016 in Los Angeles, California. NOTE TO USER: User expressly acknowledges and agrees that, by downloading and or using this photograph, User is consenting to the terms and conditions of the Getty Images License Agreement. (Photo by Sean M. Haffey/Getty Images)

LOS ANGELES (AP) — Kobe Bryant went out with a Hollywood ending to his remarkable career.
He scored 60 points in his final NBA game Wednesday night, wrapping up 20 years in the NBA with an unbelievable offensive showcase in the Los Angeles Lakers' 101-96 victory over the Utah Jazz.
Bryant scored 23 points in the fourth quarter, posting his first 50-point game since February 2009 and rallying the Lakers from a 15-point deficit to win the final game of the worst season in franchise history.
With the entire Staples Center crowd standing, Bryant drained a 3-pointer with 59 seconds left. He hit another with 31 seconds to play, putting the Lakers ahead 97-96. He finished with an assist before checking out for good with 4.1 seconds left in just the Lakers' 17th win of the worst season in franchise history.
PHOTOS: 20 years later, Kobe Bryant's final game
Bryant took a career-high 50 shots to get there. He posted his highest-scoring performance since getting 61 against New York in 2009. It was the fifth highest-scoring game of his career, and he became the oldest player to score 50 points in an NBA game.
The entire night was a tribute to Bryant, who is retiring after 20 seasons, five championship rings and 18 All-Star selections with the Lakers, who honored him before and after the game. Bryant is just the fifth player in NBA history to play 20 seasons, and the first with just one team.
Between the whistles, Bryant and his teammates conspired for one last omnivorous scoring performance by the third-leading scorer in NBA history.
Bryant surpassed his previous career high of 47 shots, taken in a loss to Boston on Nov. 7, 2002.
It was daylong tribute with thousands of fans thronging the downtown streets around Staples Center and chanting his name from early afternoon. Fans lucky enough to get inside Staples Center greeted him with ovations at every opportunity. Magic Johnson anchored a brief pregame tribute by calling Bryant "the biggest and greatest celebrity we've had in this town for 20 years" and "the greatest to wear the purple and gold."
After blowing kisses and pounding his heart before the game, Bryant got right to work on what the fans wanted to see. But he missed his first five shots before finally pump-faking and finally connecting on a jumper.
Bryant found a rhythm then, finishing the first quarter with 15 points on 13 shots. He kept it up after sitting out the first six minutes of the second, finishing with 22 points despite missing a last-minute shot, his 20th of the first half.
Associated Press 2016