Four women who have had romantic relationships with New York's attorney general have accused him of physically abusing them.

Two of the women spoke on record to The New Yorker , which published their claims against Attorney General Eric Schneiderman on Monday.

Michelle Manning Barish and Tanya Selvaratnam say Schneiderman repeatedly hit them, often after drinking, and without their consent.

Selvaratnam says the Democrat warned her he could have her followed or her phones tapped. Both say he threatened to kill them if they broke up with him.

“After I found out that other women had been abused by Attorney-General Schneiderman in a similar manner many years before me, I wondered, who’s next, and knew something needed to be done. So I chose to come forward both to protect women who might enter into a relationship with him in the future but also to raise awareness around the issue of intimate partner violence.”

A Schneiderman spokesman says he never made any threats. In a statement released prior to his resignation, Schneiderman says he engaged in "role-playing and other consensual sexual activity," but did not assault anyone.

The Associated Press is identifying the two women who spoke to The New Yorker because they agreed to tell their stories publicly.

"In the privacy of intimate relationships, I have engaged in role-playing and other consensual sexual activity. I have not assaulted anyone. I have never engaged in non-consensual sex, which is a line I would not cross."

Schneiderman's ex-wife, Jennifer Cunningham also issued a statement in light of the allegations.

“I’ve known Eric for nearly 35 years as a husband, father and friend. These allegations are completely inconsistent with the man I know, who has always been someone of the highest character, outstanding values and a loving father. I find it impossible to believe these allegations are true.” 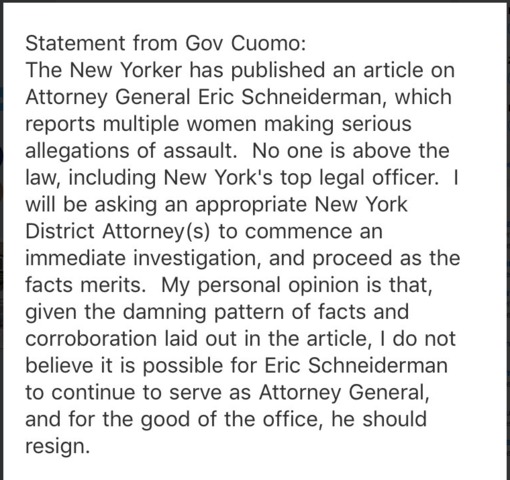 "The descriptions by these brave women of the physical and sexual abuse they suffered at the hands of NY Attorney General Eric Schneiderman are sickening. It is the right decision for him to resign immediately. The women who came forward so courageously to tell their stories and spared others from suffering are heroines. The investigation should continue. We need to get to the bottom of the enormous culture of silence that protects those in power. We must continue to work to end this national epidemic."

In the wake of very troubling and disturbing statements of several women who alleged similar violent encounters with NYS Attorney General Eric Schneiderman, it is appropriate that he has chosen to resign his position. Any act of violence against anyone is intolerable and we cannot and will not permit such behavior to go unchallenged and properly adjudicated.