Police in Texas have confirmed the suspected Austin serial bomber killed himself.

During a news conference Wednesday morning, police said they had tracked him to a hotel outside Austin, and were trying to arrest him overnight when he blew himself up with a homemade explosive device as SWAT officers approached his car.

One of the officers suffered minor injuries from being knocked back by the blast. Another fired his weapon into the vehicle. Police say that officer is now on administrative leave, per police protocol.

Investigators say the suspected bomber was a 24-year-old man, but are not releasing his name pending a medical examiner report and notification to his next-of-kin.

Right now, police do not know what his motives were, but are still concerned there may be more explosives in the Austin area because it's unclear where the suspected bomber was over the last day or two. 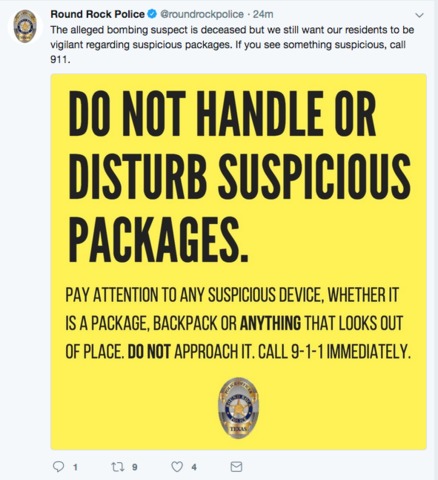 This ends three weeks of high anxiety around Austin where a series of package explosions killed two people and injured several others.