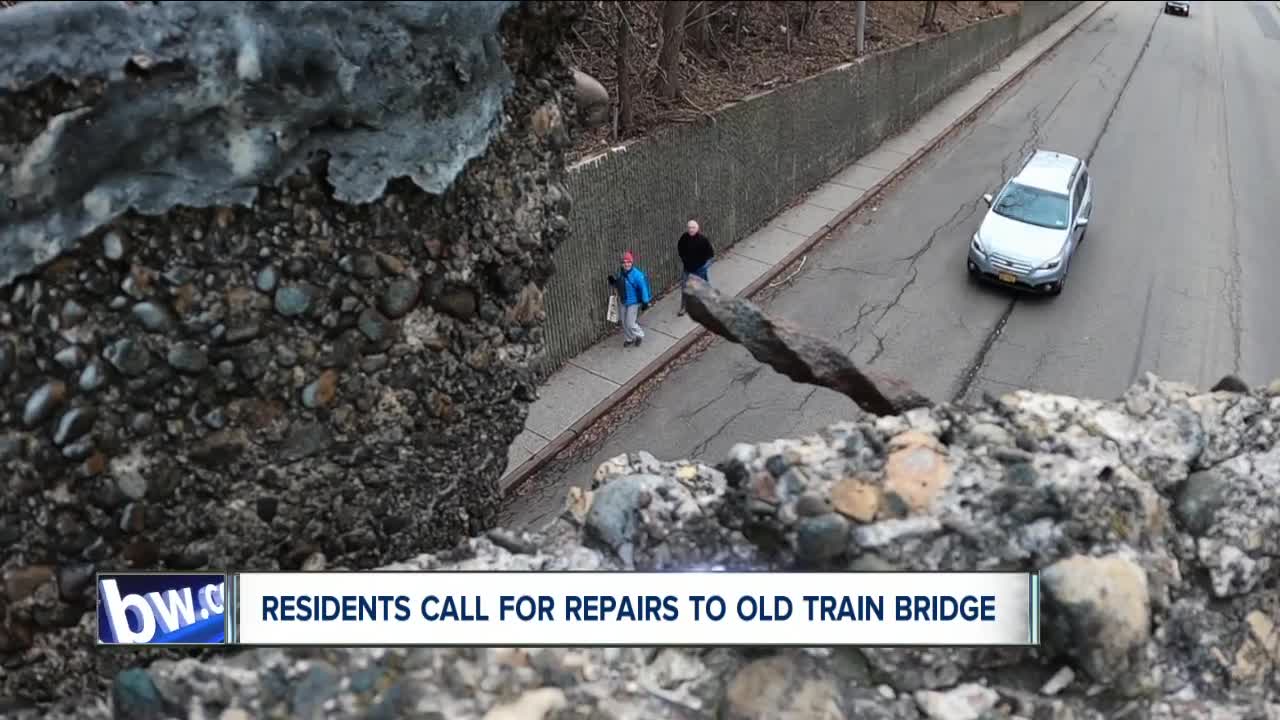 BUFFALO, N.Y. (WKBW) — Crumbling infrastructure is a huge problem for the whole country and a 110-year-old railroad bridge overpass on Parkside Avenue is a good example.

"We are concerned, first of all, that the bridge will fall down," said North Buffalo resident Jean Dickson.

The bridge was built in 1910 and is still used by trains. However, it is covered with crumbling concrete, exposed metal rods (rebar), and there are holes in its underside that covers over Parkside Avenue.

"Frequently, you'll see pieces of concrete on the ground along the sidewalk and in the street," added Dickson.

City of Buffalo officials confirmed that complaints about the bridge have been passed to CSX, the railroad that owns the bridge.

Delaware District Councilmember Joel Feroleto said it is a frustrating situation because railroads, and their property, fall under federal jurisdiction. Feroleto said he plans to ask the Buffalo federal delegation for help in getting CSX to make repairs.

While the situation continues, residents living near the bridge fear it will take a serious injury before something is done.

"This is North Buffalo; a place where they are trying to get people walking between the park (Delaware Park) and Hertel," said Meaghan Barone. The mother of two young children said it was already challenging walking under the bridge because of its curved architecture, narrow sidewalks and traffic - but having the threat of falling concrete is unacceptable.

"It is just in terrible disrepair," added Barone.

7 Eyewitness News reached out to CSX for a comment and received the following statement:

"Safety is the number one priority at CSX, and the company’s primary focus is on maintaining the safety of our infrastructure and structural integrity of the bridges on our network. CSX’s dedicated team of bridge maintainers regularly inspect every bridge on our network using detailed inspection protocols and extensive knowledge of engineering standards, which meet or exceed regulatory requirements. We will continue to monitor the Parkside Ave bridge and work with the city to address any concerns.