Unclear if Tops is still involved

A three-year-old plan to bring a grocery store to downtown Buffalo is finally moving forward, but it's unclear whether the intended tenant, Tops Markets, is still involved.

On Wednesday, Buffalo Mayor Byron Brown said the city is very close to reaching a deal with Ciminelli Real Estate over the sale of 201 Ellicott Street.

But Mayor Byron Brown refused to confirm that Tops Markets is still part of the project.

"We're not going to talk about specific tenants that will be part of the project. We'll let Ciminelli do that after the sale is concluded and the project continues to move forward," Mayor Brown said.

Tops was identified as the "preferred operator" of the downtown grocery store when plans for the 201 Ellicott project were first announced in February of 2016.

Mayor Brown did, however, confirm that there will be a grocery store in the development project.

"What I'll say at this point is that we are continuing to work closely with the city, the project is definitely making progress and we are moving forward. There will be more of an update as we get closer to finalizing the deal with the City.", said Anne Duggan, the Vice President of Marketing and Public Relations for Ciminelli Real Estate.

Back in December 2016, Ciminelli released its plan for the space. It included:

Renderings from the December 2016 presentation: 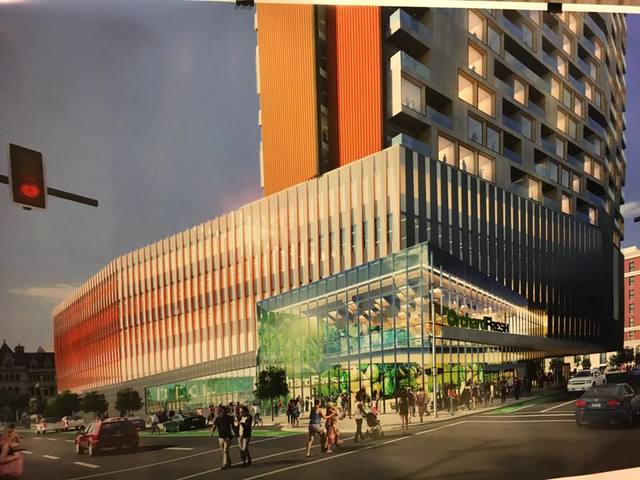 (Note: in February, City of Buffalo Executive Director of Strategic Planning Brendan Mehaffy told 7 Eyewitness News that the design has changed quite a bit since this rendering, but new renderings have not been released. Mehaffy confirms to 7 Eyewitness News that the mixed-use project will still include a grocery store, residential and office space and a large public plaza.)

In February, the city's Executive Director of Strategic Planning, Brendan Mehaffy, told 7 Eyewitness News that Tops had not formally pulled out of the project and that Ciminelli and Tops were in talks about what role the supermarket chain would play in the final mixed use project.

The City of Buffalo, Ciminelli Real Estate, and Tops Markets have been back-and-forth on this project for more than three years, and the newfound uncertainty could be tied to Tops' recent financial woes.

It started during Mayor Brown's 2015 State of the City address when the Mayor announced that the city was looking at the parcel of land at 201 Ellicott Street, which is located behind Hotel Lafayette, as an ideal spot for a grocery store. He said the city would begin sending out requests for proposals to develop the property.

'We are talking about a major grocery story," said Brown back in 2015. "We have been in communications with some of the major chains; we feel with the growth of residential people downtown that now is the time to do this."

In the RFP, the city said it was seeking a qualified developer to come up with a plan turn the site into a full line grocery store and mixed-use development project that includes a significant residential element.

Fast forward to February 2016, when Mayor Brown announced that the city had selected Ciminelli Real Estate to develop 201 Ellicott Street during his 2016 State of the City address. During his speech, Mayor Brown also announced the site would feature Tops Markets as the grocery store.

At the time, representatives from Tops seemed less sure of the deal, telling 7 Eyewitness News that the company would begin to to explore "the feasibility of a grocery store at that location."

"As the operator of seven grocery stores already in the City of Buffalo, and as the leading provider of fresh products and quality savings, we feel it is important to the community to investigate opportunities to provide a top-notch grocery store for the downtown residents.However, at this time, we have not entered into any formal negotiations with Ciminelli Real Estate Corp," the spokesperson said.

In December 2016, the Tops concept store Orchard Fresh was included in the finalized plans for the project, but as of Wednesday, the city would not confirm Tops Markets is still involved.

The uncertainty could be connected to Tops' financial struggles.

In January, the company revealed it was seeking advice on how to handle its $723 million dollar debt load. Shortly after that, Tops announced it was filing for Chapter 11 bankruptcy protections. At the time, a company spokesperson said stores would continue to operate as usual. However, 7 Eyewitness News obtained court documents in April revealing that the company is looking to close underperforming stores.

7 Eyewitness News has reached out to Tops for comment.