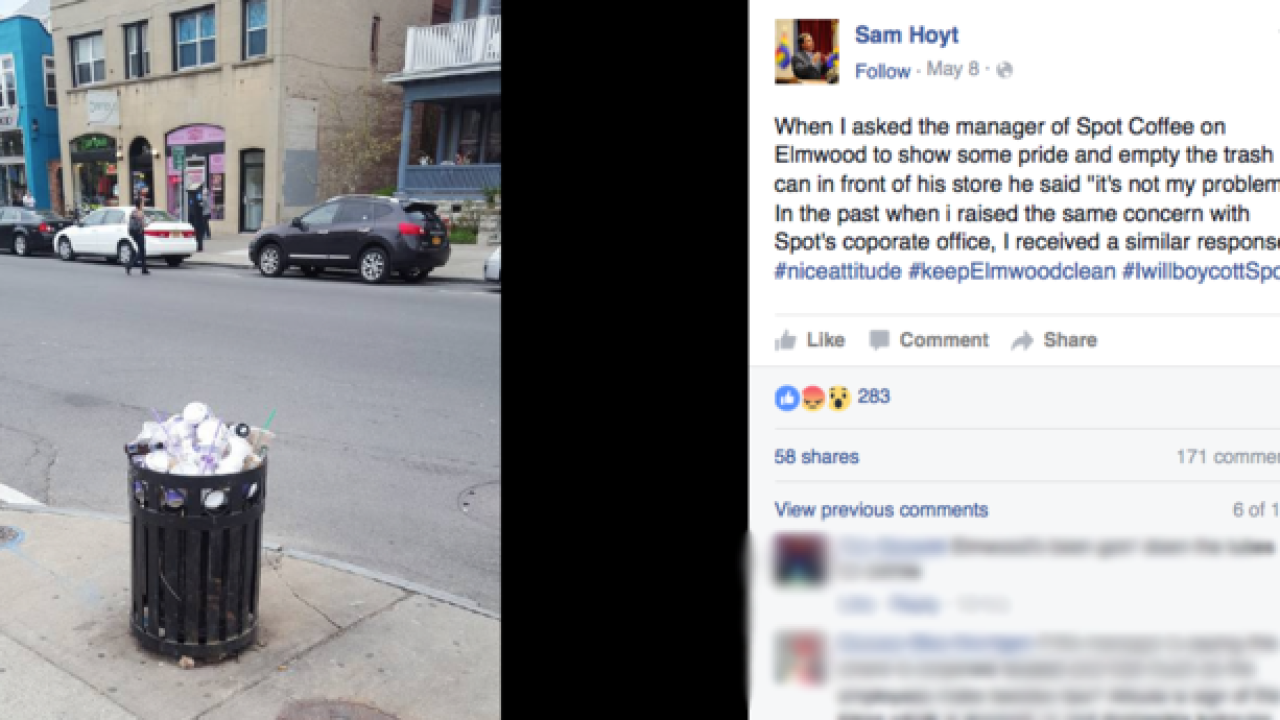 A post on Facebook by a former politician and current Regional President of the Empire State Development Corporation has people picking sides.

On Sunday, Sam Hoyt posted a picture to his Facebook page that shows an overflowing garbage can outside of SPoT Coffee on Elmwood Avenue.

Hoyt says he asked the manager of the coffee shop to empty the trash can, but claims the manager told him “it’s not my problem.” Hoyt said he brought the issue up to SPoT’s corporate office and got a similar response.

His post set off a firestorm of comments, with nearly 200 people chiming in. Some agreed with Hoyt, but others say this is the city’s problem.

Don commented, “City taxpayers shouldn’t be responsible for doing city trash pick-up – that’s what taxes and garbage fees are for after all.”

But the garbage can in question isn't actually owned by the city. Mike DeGeorge, city spokesperson, says there are tote bins about 20 feet away that are city-owned but this trash can is owned by the Elmwood Village Association (EVA).

The EVA says the trash cans outside SPoT and other businesses along Elmwood were installed in a partnership with the city and property owners in an effort to keep the area clean. Before a trash can is installed, the EVA talks to the property owner and explains that although the city will empty the cans along Elmwood four times a week, if it becomes full, it is their responsibility.

Morning mornings, you can see city workers emptying garbage cans along Elmwood Avenue. But by that time, especially after a busy weekend, many of the cans are overflowing. The EVA says in those cases, the property owner should be emptying the can.

Hoyt argues SPoT and other businesses should be willing to empty them before then if the cans fill up.

“I am in no way blaming the city. I am saying a business owner should take pride in their property and keep the inside and out clean. The city has enough on its plate and everybody should pitch in to keep a neighborhood attractive,” Hoyt wrote.

The garbage cans on Elmwood regularly overflow on the weekends due to the increased amount of visitors to the area. SPoT Coffee isn’t alone in occasionally having a can outside its business that is full to the brim.

Some questioned why Hoyt singled out SPoT. Chris wrote, “Why not complain to the city? It seems like that would be their responsibility. But of course you want to boycott a profitable business and make them leave the city. Sounds legit.”

Hoyt explained, “The reason I posted this photo and message was out of frustration by the response that I received from staff and the corporate office.” In a separate post, Hoyt said, “I don't disagree that the city ultimately is responsible for emptying the trash cans but I think a merchant needs to step up when the city is not available.”

Others accused Hoyt of “stirring the pot,” but Hoyt explained, “I often post provocative things because I love the "cross talk" that ensues even if it is people are attacking he who posted it.”

7 Eyewitness News reached out to SPoT for their take. Kurt Wissing, the Operations Manager for the coffee chain, said he was contacted by Hoyt last summer about this issue and vowed then to make the four garbage cans at the corner of Elmwood and Cleveland a responsibility for the store.

“Our staff did a great job of staying on top of that task,” Wissing wrote, adding, “With the start of this summer season, we will be taking care of the trash bins again. This photo must have been taken during a particularly busy time at our café while the employees were occupied by serving customers.”

Wissing says the manager of that location does not recall a conversation over the weekend with Hoyt about the garbage cans.

Hoyt wrote that he feels his message has been delivered and “there is some evidence that it has been heard.” The EVA says they will be following up with the business to make sure SPoT takes responsibility and may move the can if necessary.

Though Hoyt is satisfied that SPoT will be keeping up with the trash cans outside their shop, it doesn't solve the issue of other overflowing cans outside other businesses along Elmwood Avenue. Without blaming the city for the problem, at least one commenter still feels this is an issue for the city to tackle.

Sandra wrote, “Everyone needs to clean up the trash in their spaces from personal homes to businesses to public streets. Buffalo is rising and so are all the plastic bags, bottles and trash around. Our leaders need to bring this up as a public issue, and there needs to be more personal responsibility to keep our city clean!”