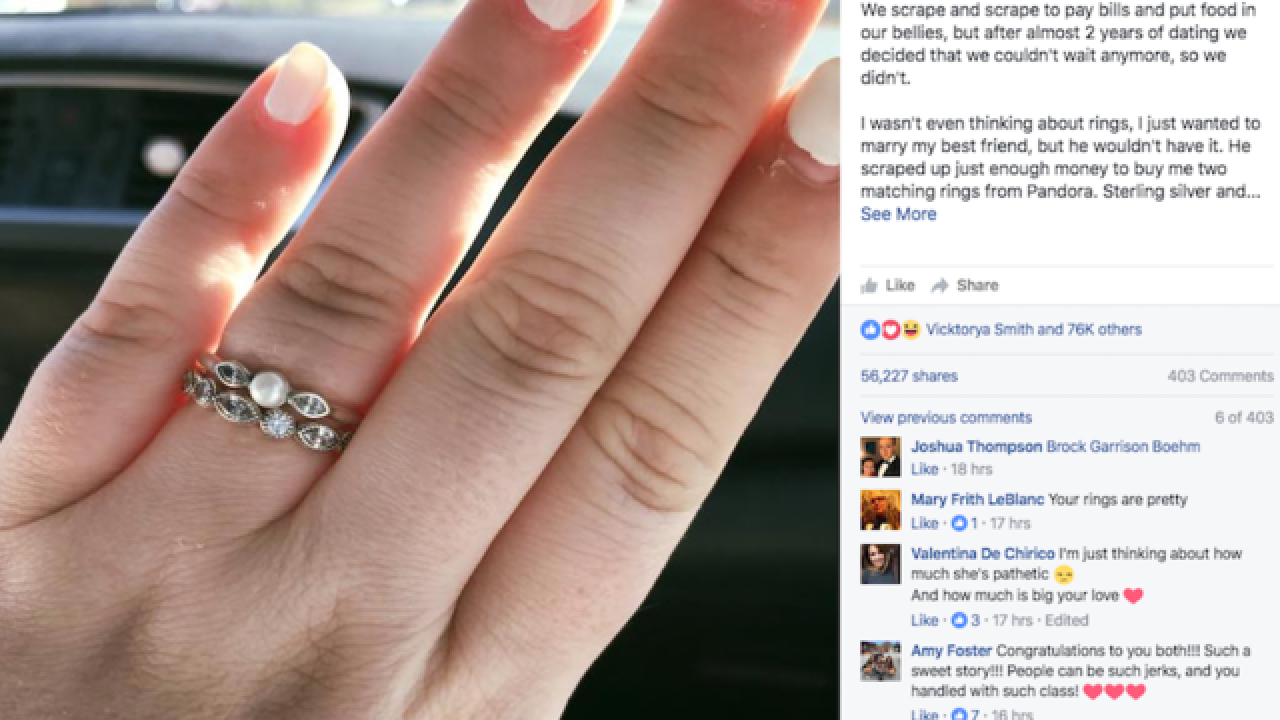 Ariel Desiree McRae / Facebook
<p>This Facebook post from Ariel McRae, a woman from Martin, Tennessee, went viral after she says her husband was shamed by a jewelry store clerk because of the meager price of her engagement ring.</p>

A Tennessee woman who says her engagement ring set was called "pathetic" by a jewelry store clerk took to Facebook to write a reply that's gone viral.

"My husband doesn't have a lot, neither of us do," wrote Ariel McRae on Nov. 26, with a picture of her ring set. "I wasn't even thinking about rings, I just wanted to marry my best friend, but he wouldn't have it. He scraped up just enough money to buy me two matching rings from Pandora."

McRae said the ring set was cubic zirconia set in sterling silver and cost about $130.

When McRae and her husband-to-be went to the store to pick up the rings, she claims a clerk insulted his choice. "'Can you believe that some men get these as engagement rings? How pathetic,'" McRae said the woman working at the jewelry store told her, as her husband-to-be sat at her side.

"When she said that, I watched my now husband's face fall. He already felt bad because he couldn't afford [a more expensive ring set] ... He already felt like a failure, asking me again and again, 'Are you sure you'll be happy with these?,'" she wrote.

McRae said she thought about "ripping that woman a new one" but decided to just buy the rings and move on. Her Facebook post about the incident has been shared more than 56,000 times and liked about 77,000 times. She didn't name the store in which the incident happened.

Since the post picked up so much steam, McRae said she is thinking of starting a "wife blog" about her day-to-day life.