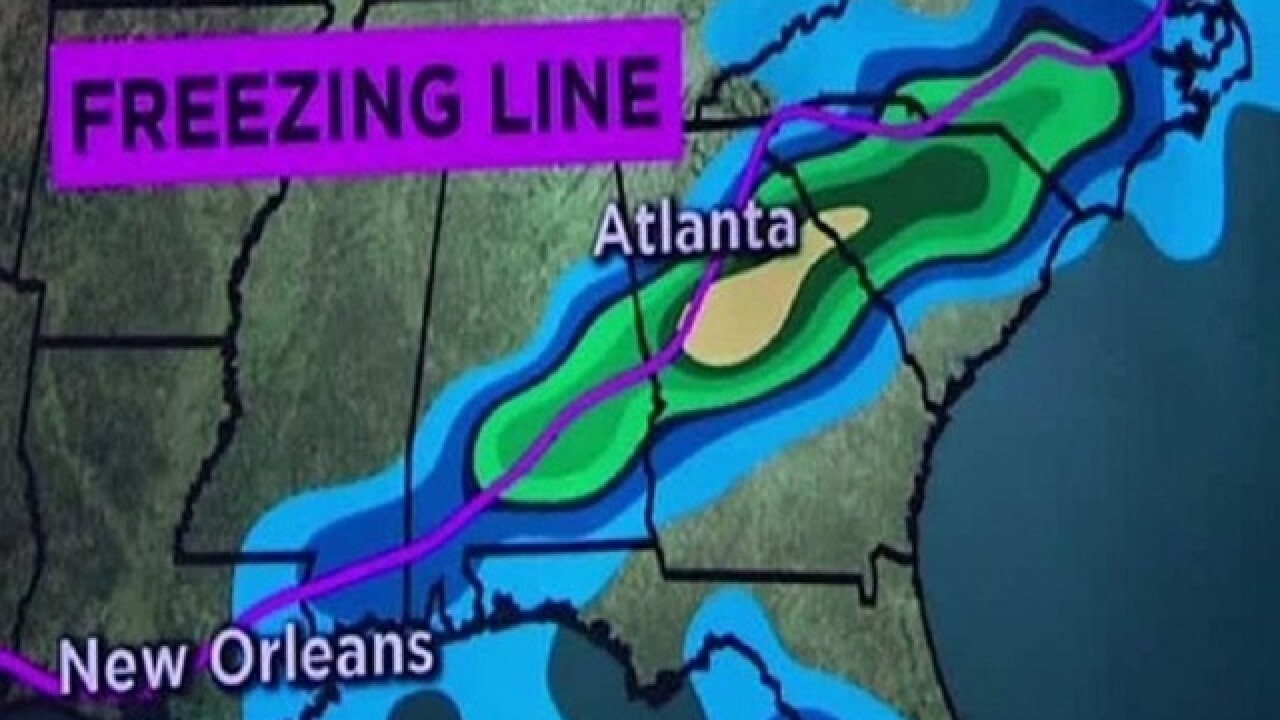 Copyright 2017 Scripps Media, Inc. All rights reserved. This material may not be published, broadcast, rewritten, or redistributed.
CNN
<p>A winter storm is expected to sweep through the Southeastern United States late Friday and early Saturday, bringing a potential mixture of snow, sleet and ice.</p>

ATLANTA (CNN) -- Nervous residents have flocked to grocery stores in anticipation of snow in the South this weekend.
A winter storm is expected to sweep through the Southeastern United States late Friday and early Saturday, bringing a potential mix of snow, sleet and ice.
Raleigh, North Carolina, is likely to face the brunt of the storm, with 4 to 10 inches of snow predicted. Charlotte is looking at some 3-4 inches of snow, and CNN's meteorologists believe at least an inch of snow is likely to fall in Metro Atlanta, with potential for up to 4 inches.
The National Weather Service has issued winter storm watches for Alabama, Georgia and the Carolinas -- including such metropolitan areas as Atlanta, Birmingham, Alabama; and Greenville, South Carolina.
A winter storm watch means there is potential for significant snow, sleet or ice accumulations that may impact travel. Lighter accumulations of snow are forecast for portions of Mississippi, Tennessee and Virginia.
"The heaviest snowfall will be expected to fall from the southern Appalachians to southeastern Virginia," said the National Weather Service, adding that "most precipitation will begin to taper off by Saturday evening."
Many schools and universities weren't taking any chances. Atlanta students will go home two hours early Friday and Georgia Tech will close at noon. The University of Alabama is suspending operations for the day.
As customary, residents in warning areas flocked to grocery stories to load up on bread, milk and more. Alex Preston of Atlanta wrote with his photo of long lines: "Because of a snow flurry ... really?"
While hardy folks from the North often scoff at Southerners for the clearing of store shelves, we might be able to thank a particular region for at least some of it, according to AccuWeather.com.
"It appears that New Englanders can take credit for the purchasing of milk and bread prior to the storm," the site reported last year. "It was the monumental blizzard in 1978 that trapped many in homes for weeks that gets at least some credit for the current tradition."
Amid the run on goods, forecasters are telling people to take warnings and watches seriously.
Major airlines issued advisories about potential impact. Flightaware, which tracks cancellations, on Thursday evening did not show a large number of those for Friday and Saturday, but those numbers could quickly change.
Snowstorms in the South are notoriously difficult to forecast, however, as timing or a change of 1 or 2 degrees can be the difference between several inches of snow or just a cold rain. National Weather Service meteorologists called the forecast "tricky" in their discussion of the storm Wednesday.
There is still some uncertainty, as a few forecasting models show precipitation arriving before the temperatures cool down enough to create snow. As the storm develops out of the Gulf of Mexico there is chance that a narrow band of forecasted higher snow totals could widen, producing heavier snow across a broader area.
And depending on where the snow/rain line falls, some areas could see a mixture of rain and snow in the beginning, which would keep snow totals down. This is especially likely in places like Birmingham, where the storm will begin earlier on Friday -- most likely as a wintry mix of snow and sleet.
There is a chance the air will remain just warm enough in places farther south that the precipitation will just fall as sleet.
The best news about this storm is that it will happen on the weekend, which should prevent another "snow jam" scenario like the one that paralyzed Atlanta in January 2014.
During that storm tens of thousands of weekday commuters left work around the same time, creating massive gridlock on roads and highways and stranding vehicles for hours.
CNN's Brandon Griggs and Dave Alsup contributed to this story.
The-CNN-Wire
™ & © 2017 Cable News Network, Inc., a Time Warner Company. All rights reserved.
Copyright 2017 Scripps Media, Inc. All rights reserved. This material may not be published, broadcast, rewritten, or redistributed.