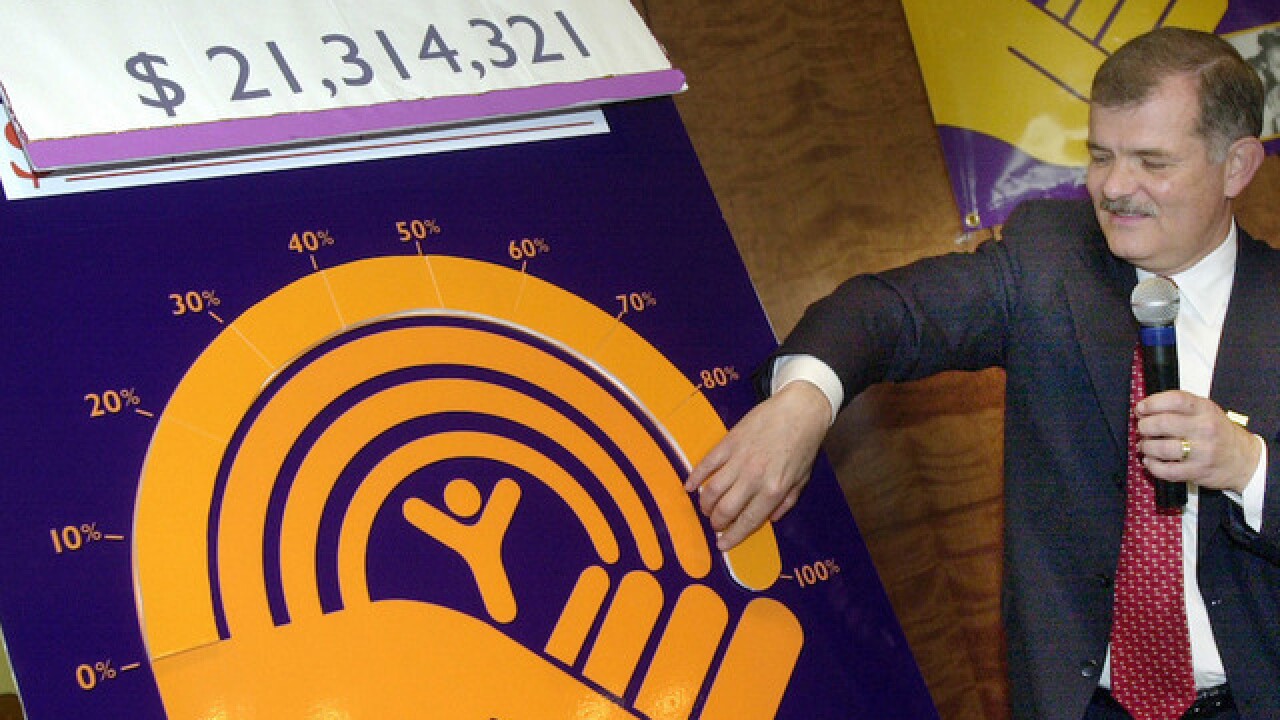 NEW YORK (AP) — United Way, ranked as America's largest charity for all but one of the past 25 years, has been emphatically knocked from that spot by Fidelity Charitable, the leader of a rapidly growing philanthropic sector that is transforming the way many Americans give.

Boston-based Fidelity, which collected $4.6 billion in private donations in 2015, is a donor-advised fund — an increasingly popular type of charity to which a donor can make a contribution, immediately receive a tax benefit, and then recommend grants from the fund at any time thereafter.

The new rankings released Thursday by the Chronicle of Philanthropy showed that Fidelity's private support rose nearly 20 percent from 2014, when it narrowly trailed United Way. The new data showed United Way in second place, with $3.7 billion in support — down 4.2 percent from 2014.

Feeding America, which supplies many food banks in the U.S., was third in the new rankings, followed by a California-based donor-advised fund, the Schwab Charitable Fund. Catholic Charities USA ranked fifth, the Salvation Army was sixth.

Since 1991, when the Chronicle of Philanthropy started its rankings, United Way had been the largest charity in every year except 2006, when the Salvation Army took the top spot.

Brian Gallagher, president of United Way Worldwide, attributed the shift to economic trends, including a surge in giving by the weathy and stagnating wages for many of the middle-class Americans who have been loyal United Way donors. United Way's average contribution is $365, while the minimum a donor must give to contribute to Fidelity Charitable is $5,000, and the average account size is about $15,000.

"We see it as a good thing — we don't see it as competitive," said Gallagher, noting that United Way receives some donations via donor-advised funds.

Founded in 1991, Fidelity is nearing its goal of allocating $25 billion in charitable grants over its first 25 years. Last year, its 132,000 donors recommended $3.1 billion in grants to support more than 106,000 organizations across the U.S. and abroad — making it the nation's second-largest grant-maker behind the Bill & Melinda Gates Foundation.

"It's a way to democratize giving," she said. "We make it easy and accessible for everybody."

Another advantage of Fidelity and other large donor-advised funds: They're efficient at processing non-cash donations such as real estate, securities, even bitcoins. Fidelity says about two-thirds of its contributed dollars last year were non-cash assets.

By some calculations, donor-advised funds could soon account for 10 percent of all giving from individual Americans.

Stacy Palmer, editor of the Chronicle of Philanthropy, said she expects the sector to continue its speedy expansion.

"There is a transformation going on in how donors give," she said. "It means donors have a lot more control over their donations than if they just write a check to United Way."

Palmer said traditional charities will have to adjust to the popularity of donor-advised funds, perhaps offering their own versions of the concept or explicitly wooing contributions that cycle through funds like Fidelity.

As they gain prominence, donor-advised funds have drawn some criticism.

One of the most vocal skeptics is Ray Madoff, a Boston College law professor who has called them "a bad deal for American society." She says the funds are thriving because of the benefits they offer to wealthy donors and to the financial-services industry, which can make money through fees for managing the donors' accounts.

"Affluent people love DAFs because they make it easy to time their contributions to get the maximum tax benefit," she wrote in a commentary for the Chronicle of Philanthropy. "DAFs are here to stay — but that doesn't mean that lawmakers, nonprofit leaders and the public need to keep letting them undermine the philanthropic spirit that is the very bedrock of our democracy."

Unlike foundations, donor-advised funds are not subject to any payout requirements. Madoff and other critics say Congress should impose some sort of payout timetable so donors' dollars do not sit in the accounts indefinitely without benefiting individual charities.

Pamela Norley said Fidelity does prod its donors to make contributions on a timely basis, rather than letting funds sit inactive for many years. But she's not in favor of federal legislation that would mandate a particular timetable.

According to the new Chronicle of Philanthropy rankings, fortunes were mixed for some of the longstanding, brand-name charities. The Y, for example, reported a 28 percent increase in private donations and held the No. 12 spot, while the American Red Cross recorded a 16 percent drop in donations and fell from 21st place to 31st.

The Planned Parenthood Federation of America, targeted by anti-abortion activists who want to halt its receipt of government funding, reported that its private donations rose by 11 percent to nearly $188 million.

Even as donor-advised funds grow in size, some barometers suggest that Americans overall are not getting more generous.

According to the latest annual Giving USA report, giving by individuals represented 2 percent of total disposable income in 2015 — down from 2.4 percent in 2000 and the same as the rate in 1975.