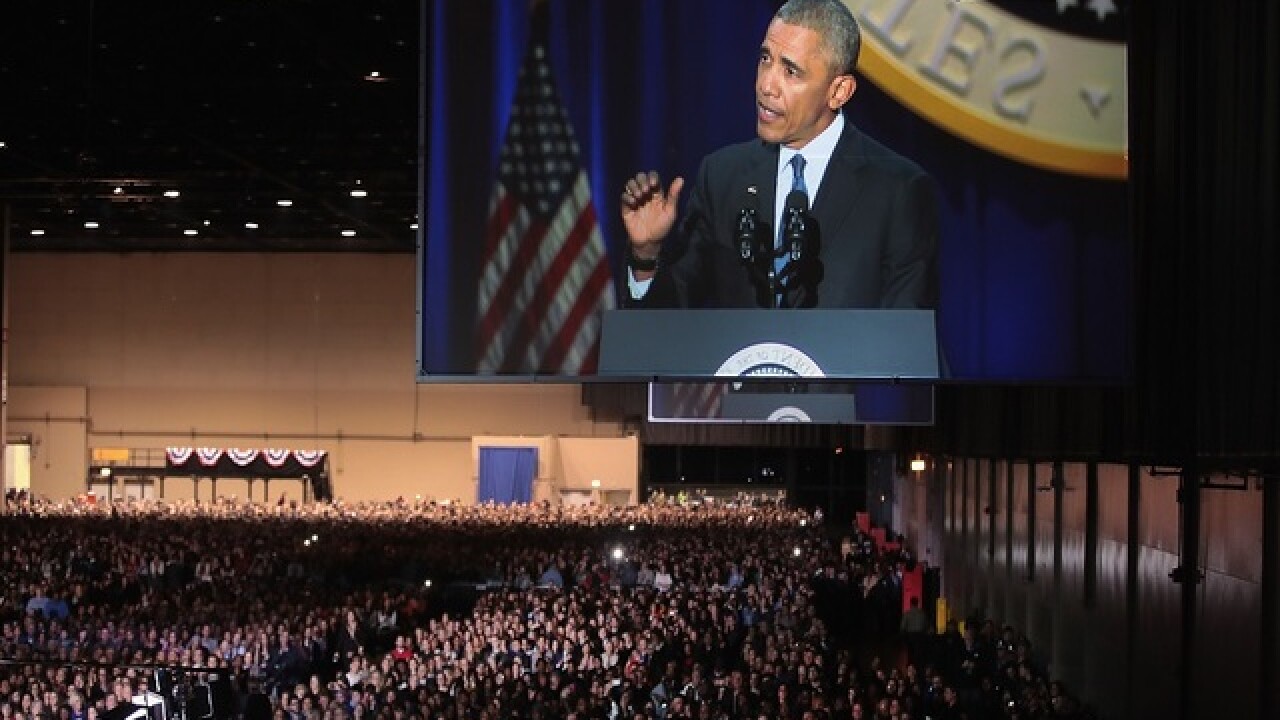 Copyright 2017 Scripps Media, Inc. All rights reserved. This material may not be published, broadcast, rewritten, or redistributed.
Scott Olson
<p>CHICAGO, IL - JANUARY 10: President Barack Obama delivers a farewell speech to the nation on January 10, 2017 in Chicago, Illinois. President-elect Donald Trump will be sworn in the as the 45th president on January 20. (Photo by Scott Olson/Getty Images)</p>

By: Mina Abgoon
Posted at 10:09 PM, Jan 10, 2017
Preparing to hand things off to further hoopla of Donald Trump’s inauguration, President Barack Obama on Tuesday night delivered an emotional farewell speech to an audience roaring with applause.
His popularity and approval rating only improving towards the end of his presidency, social media lit up with well wishes to the president, sadness and even hopelessness for the future.
See some twitter reactions – from political figures, celebrities, and viewers from around the world -- below.

President Obama is a good man who has made our economy, country, & planet safer - & has given us hope. Thank you, @POTUS. #ObamaFarewell

Thank you Pres. Obama. May we honor u not just with words of thanks but by our actions: continuing to serve, sacrifice & fight for America.

When I feel scared about where America is going, I remind myself: The same country that elected Trump elected Obama. #ObamaFarewell

Goodbye Obama. Hello to, I honestly don't know what. ??

"If you're tired of arguing with people on the Internet try talking with one in real life."
- Pres. Obama

OBAMA I AM FOREVER GRATEFUL FOR YOU. THANK YOU ? #YESWECAN

Obama did an AMAZING job !!!! Anyone that thinks different needs to research better ?? #ObamaFarewell

Say what you will about Obama love him or hate him, but you gotta admit that was a damn good farewell speech. #ObamaFarewell