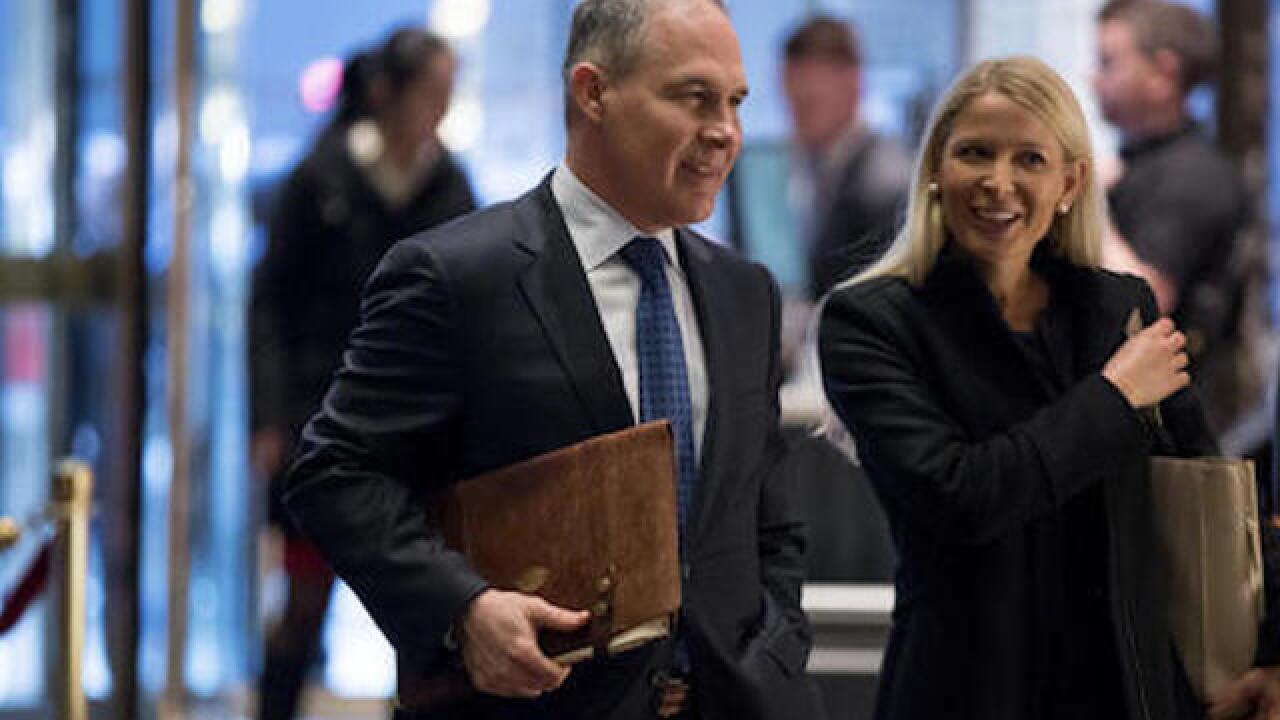 (CNN) -- Oklahoma Attorney General Scott Pruitt is President-elect Donald Trump's choice for Environmental Protection Agency administrator, his former campaign manager told reporters Wednesday.
"Attorney General Pruitt has great qualifications and a good record as the AG of Oklahoma, and there were a number of qualified candidates for that particular position that the President-elect interviewed and he settled on Attorney General Pruitt and we'll look forward to the confirmation hearing," Kellyanne Conway told reporters Wednesday.
The move elevates a fierce EPA critic -- Pruitt had sued the agency over its regulations of power plants -- to the position of EPA administrator.
It's a signal the Trump administration is intent on reversing President Barack Obama's moves to curb climate change.
Democrats and progressive groups quickly pledged to mount a fight against Pruitt's nomination.
Pruitt is a prominent denier of climate science, writing in the National Review in May that "the debate is far from settled" over whether human activity has contributed to the warming of the earth. In point of fact, the vast majority of climate scientists say climate change is real and humans contribute to it.
Incoming Senate Democratic leader Chuck Schumer of New York said Pruitt "will have to answer many tough questions" in the nominating process.
Schumer said Pruitt's "reluctance to accept the facts or science on climate change couldn't make him any more out of touch with the American people -- and with reality."
Liberal groups also assailed his selection, saying Pruitt would undermine efforts to regulate energy companies.
"Scott Pruitt running the EPA is like the fox guarding the hen house. Time and again, he has fought to pad the profits of big polluters at the expense of public health," League of Conservation Voters President Gene Karpinski said in a statement.
The selection of Pruitt comes amid uncertainty over where the Trump administration will stand on environmental issues.
Before and during the campaign, Trump was a climate science denier -- calling impact of human activity on global warming a hoax "created by and for the Chinese in order to make U.S. manufacturing non-competitive."
But after his victory, Trump changed his tone. He acknowledged in an interview with The New York Times that human activity has "some connectivity" to global warming, and has said clean water is important to him.
Trump also met this week with former Vice President Al Gore, who for years has called global warming a threat to humanity.
"I had a lengthy and very productive session with the President-elect," Gore said afterward. "It was a sincere search for areas of common ground. I had a meeting beforehand with Ivanka Trump. The bulk of the time was with the President-elect, Donald Trump. I found it an extremely interesting conversation, and to be continued, and I'm just going to leave it at that."
This story has been updated.
The-CNN-Wire
™ & © 2016 Cable News Network, Inc., a Time Warner Company. All rights reserved.
WKBW