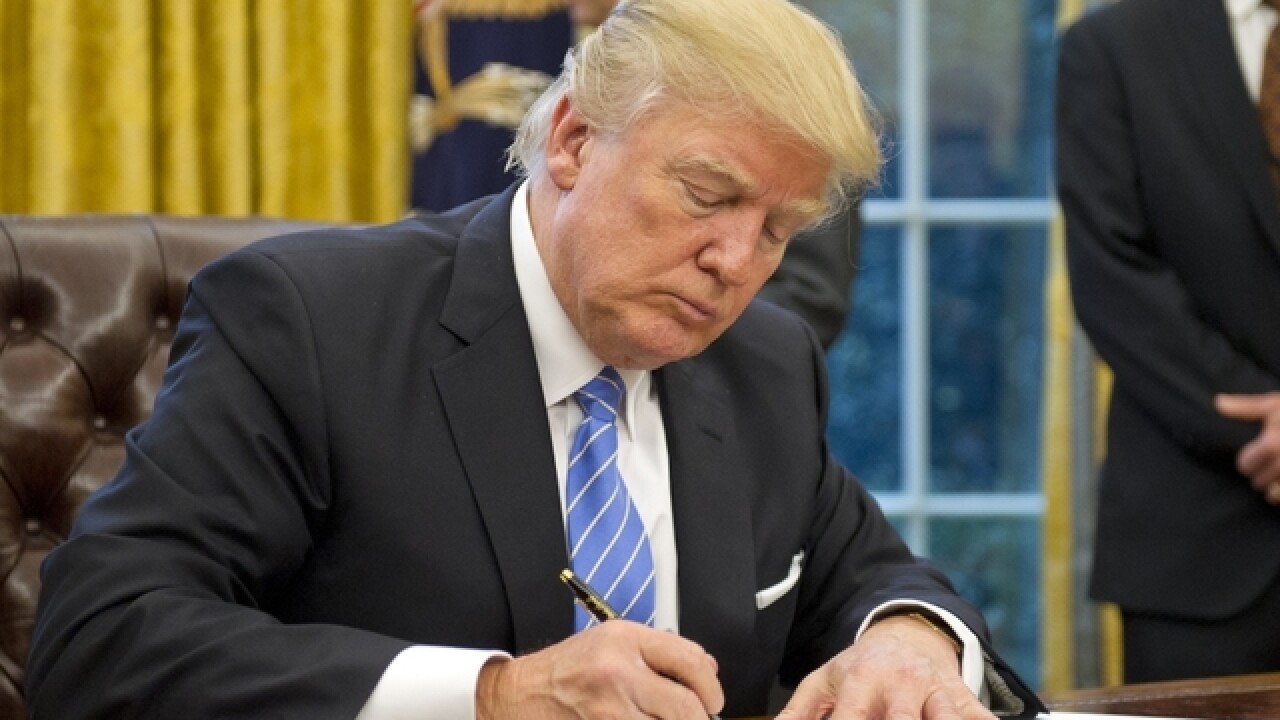 By: CNN
Posted at 1:05 AM, Jan 27, 2017
WASHINGTON (CNN) -- President Donald Trump will likely give the Joint Chiefs of Staff Friday a series of objectives for fighting ISIS so the military can design the strategic and tactical options to be presented to him in 30 days, a US official told CNN.
Defense Secretary James Mattis is quickly taking charge of a Pentagon review to determine specific options to propose to Trump to accelerate the war against ISIS.
With Trump scheduled to visit the Pentagon on Friday, Mattis, along with Joint Chiefs of Staff Chairman Gen. Joseph Dunford, have been reviewing potential options that could be presented to the President. That internal review will incorporate military advice from both Dunford and Gen. Joseph Votel, the head of the US Central Command.
Officials described two scenarios: One is to "pull" more information from the White House on how it wants to proceed. The other is to "push" to Trump some existing options that Barack Obama never approved when he was in the White House. These options have been developed with enough detail that the President could quickly sign new presidential authority orders to start the process rolling, although it could take weeks and months to see an impact on the battlefield.
Trump will meet with the Joint Chiefs of Staff in their meeting room, known as the "Tank," and preside over the swearing-in ceremony for Mattis.
Hands-off approach
US officials say the White House has taken a largely hands-off approach to how the Pentagon is being run -- at least for now.
One official described the Pentagon's relationship with the new administration as streamlined, saying that defense officials are facing fewer hoops to jump through than during the previous administration.
Following their respective retirements, President Barack Obama's former secretaries of defense, Chuck Hagel, Leon Panetta and Robert Gates had all publicly complained about what they called "micromanagement" of military policy by the White House.
But the early praise of the White House's soft touch comes amid reports that the administration drafted executive actions impacting Pentagon operations without informing the Defense Department. Mattis and CIA Director Mike Pompeo were reportedly surprised when a draft document emerged this week directing the CIA to re-examine the use of "black site" prisons and interrogation techniques that are legally considered torture.
That aside, officials say so far, so good at the Pentagon.
One of the officials who spoke to CNN provided an example of planning documents being sent to the White House returned more quickly than during the Obama administration.
Trump's approach to the Defense Department stands in stark contrast to other government agencies that have seen executive actions and shake-ups in recent days. It also appears to be a departure from initial reports suggesting a power struggle between Mattis and the White House over the appointment of key defense posts.
But officials told CNN that some of the Pentagon's policy teams had not yet received guidance from the White House on issues pertaining to military operations, such as the US mission in Afghanistan. Many political appointed positions remain vacant, potentially contributing to the absence of direction on some issues.
Trump and Russia
The Pentagon was also still trying to fully understand the administration's position toward Russia, according to one official. Trump has frequently broached the prospect of a joint US-Russia effort to combat ISIS but the US military continues to deploy troops to countries on the NATO-Russia frontier as part of an explicit effort to deter Moscow. It is possible Trump may outline some of his thinking when he meets with military leaders Friday.
Sen. Mark Warner, the top Democrat on the Senate intelligence committee, told Democratic lawmakers that Mattis and Pompeo were as surprised as the senators to learn of the document referring to black-site prisons and torture. The administration's press secretary, Sean Spicer, denied that the document was from the White House.
Another draft executive order calling for the Pentagon to help establish safe zones for refugees in Syria also was never seen by some of the staff working on Syria issues before being leaked to multiple media outlets.
However, several defense officials strongly disputed the notion that key issue areas were not being discussed with the administration, saying that there is constant robust contact and that the White House's primary focus to date had been on issues involving the fight against ISIS and Russia.
A spokesman for the Pentagon acknowledged the absence of any major changes, noting that it is still early in the new administration and that Mattis was talking to commanders and assessing the current situation.
"There's been no significant change to operations and objectives right now. We are still continuing to operate with our existing authorities," US Navy Capt. Jeff Davis told reporters at the Pentagon Thursday.
"Our orders here have not changed since the 20th of January ... Our mission has not changed and we're operating under the exact same set of authorities," Maj. Gen. Joseph Martin, the commanding general of ground forces in the US-led counter-ISIS coalition, told reporters Wednesday.
Davis added that Mattis "is very focused on listening to his commanders in the field and to finding out their needs and how he can support them in their missions."
"He is not going to come out and propose big changes right out of the box, he wants to take the time to listen in a very thoughtful and methodical manner first," Davis said.
The-CNN-Wire
™ & © 2017 Cable News Network, Inc., a Time Warner Company. All rights reserved.
Copyright 2017 Scripps Media, Inc. All rights reserved. This material may not be published, broadcast, rewritten, or redistributed.