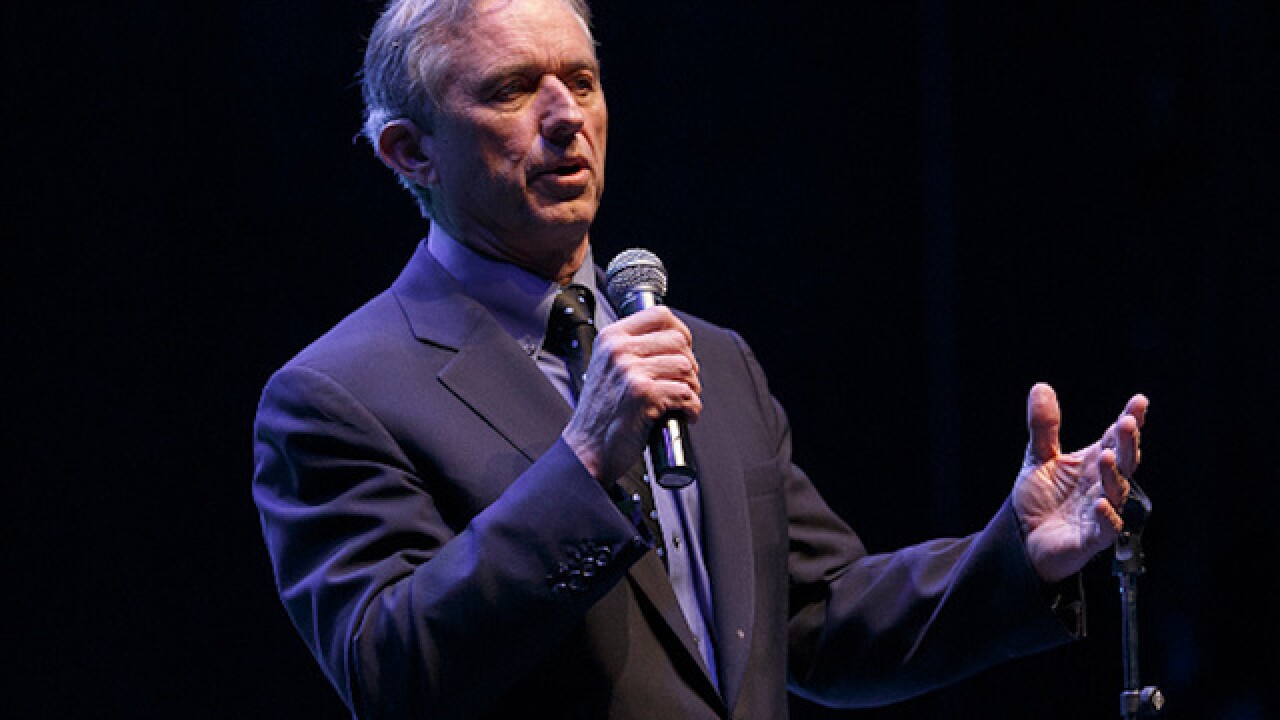 Copyright 2017 Scripps Media, Inc. All rights reserved. This material may not be published, broadcast, rewritten, or redistributed.
Rich Polk
<p>LOS ANGELES, CA - APRIL 22: President of the Board of the Waterkeeper Alliance Robert F. Kennedy, Jr. speaks on stage at the Keep It Clean To Benefit Waterkeeper Alliance Live Earth Day Comedy Benefit on April 22, 2015 in Los Angeles, California. (Photo by Rich Polk/Getty Images for Waterkeeper Alliance)</p>

Kennedy, the son of late presidential candidate Robert F. Kennedy, told reporters after his meeting with Trump that the President-elect asked him to head a look into "vaccination safety and scientific integrity."

Kennedy said he agreed to chair the commission.

Kennedy added that both he and Trump are "very pro-vaccine" but that they want to make sure vaccines are "as safe as they possibly can be."

Neither Trump nor Kennedy are expressly pro-vaccine, though.

Trump stoked fears about vaccines during the 2016 campaign, telling an audience at a CNN primary debate in 2015 that he is in favor of "smaller doses over a longer period of time" because of autism as a possible side effect.

"Autism has become an epidemic. ... It has gotten totally out of control. I am totally in favor of vaccines. But I want smaller doses over a longer period of time," he said.

Trump then told a story about how he met a two-year-old who "went to have the vaccine, and came back, and a week later got a tremendous fever, got very, very sick, now is autistic."

Trump did not identify the child he was talking about.

He has also tweeted anti-vaccine rhetoric.

"Healthy young child goes to doctor, gets pumped with massive shot of many vaccines, doesn't feel good and changes - AUTISM. Many such cases," Trump tweeted in 2014.

In 2014, Kennedy wrote a book about mercury in vaccines and has lobbied Congress to give parents exemptions from state requirements that mandate they vaccinate their children.

The lifelong Democrat downplays his anti-vaccine views, though, by saying that he is actually in favor of safe vaccines and noting that all of his children have been vaccinated.

Myths and falsehoods about vaccines -- particularly about the link between a vaccine preservative and autism -- abound. During the Republican primary, a number of candidates stoked those fears. In fact, research shows that vaccines do not cause autism and that they prevent upwards of 6 million deaths worldwide each year.

According to the same research, one in a million children have serious adverse reactions of vaccines.

Parents declining to vaccinate their children has caught on in some areas, however, and in 2015, the Centers for Disease Control and Prevention reported that 188 people from 24 states were reported to have the measles, although not all of those individuals were unvaccinated. In 2016, 70 cases of measles were reported although the numbers for the year have not been finalized yet.

"The majority of people who got measles were unvaccinated," the CDC reported, a fact they attributed to the rise on anti-vaccination activists.

Celebrities -- like Jenny McCarthy, Jim Carrey and Alicia Silverstone -- have stoked the trend.

California Gov. Jerry Brown ended up signing the law, getting rid of personal and religious exemptions for vaccines.