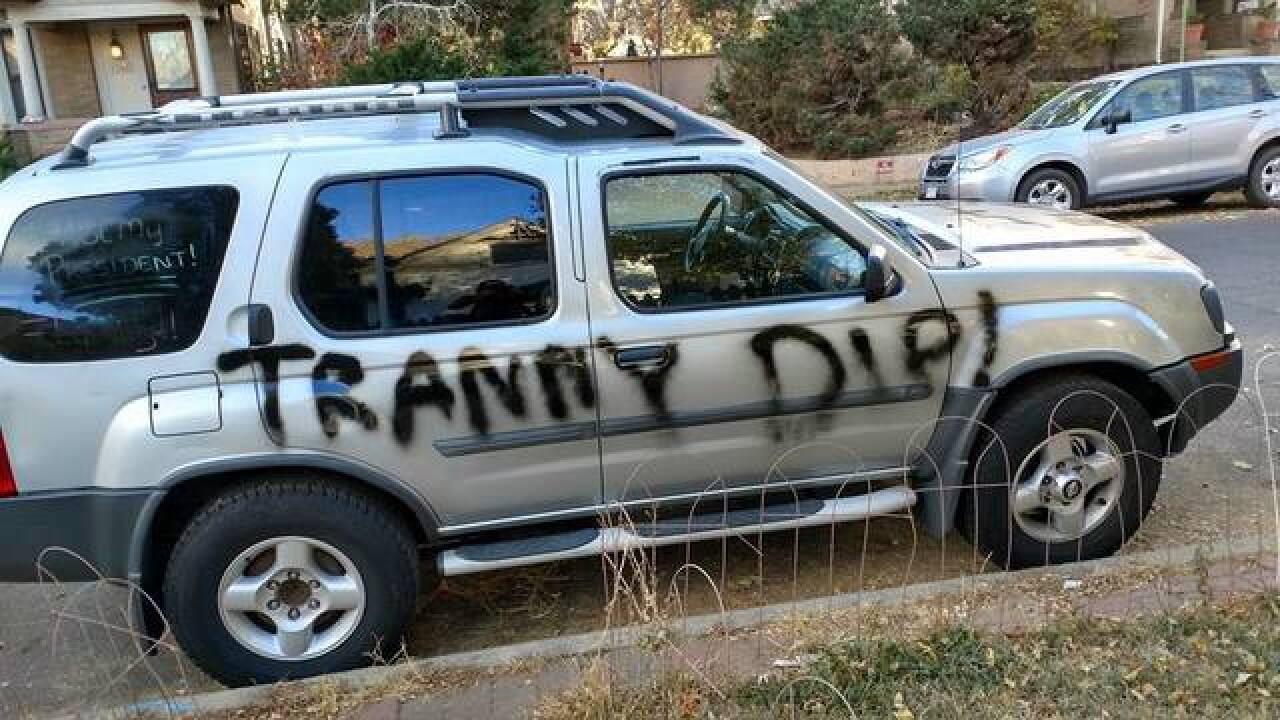 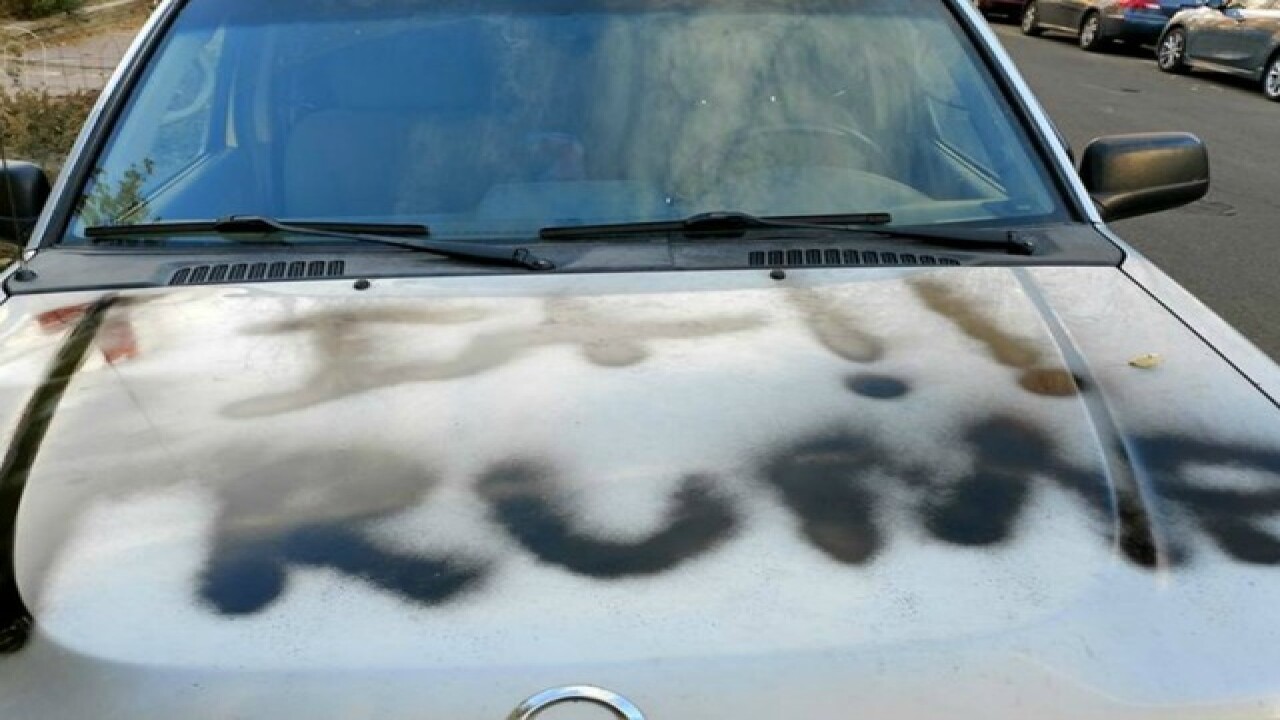 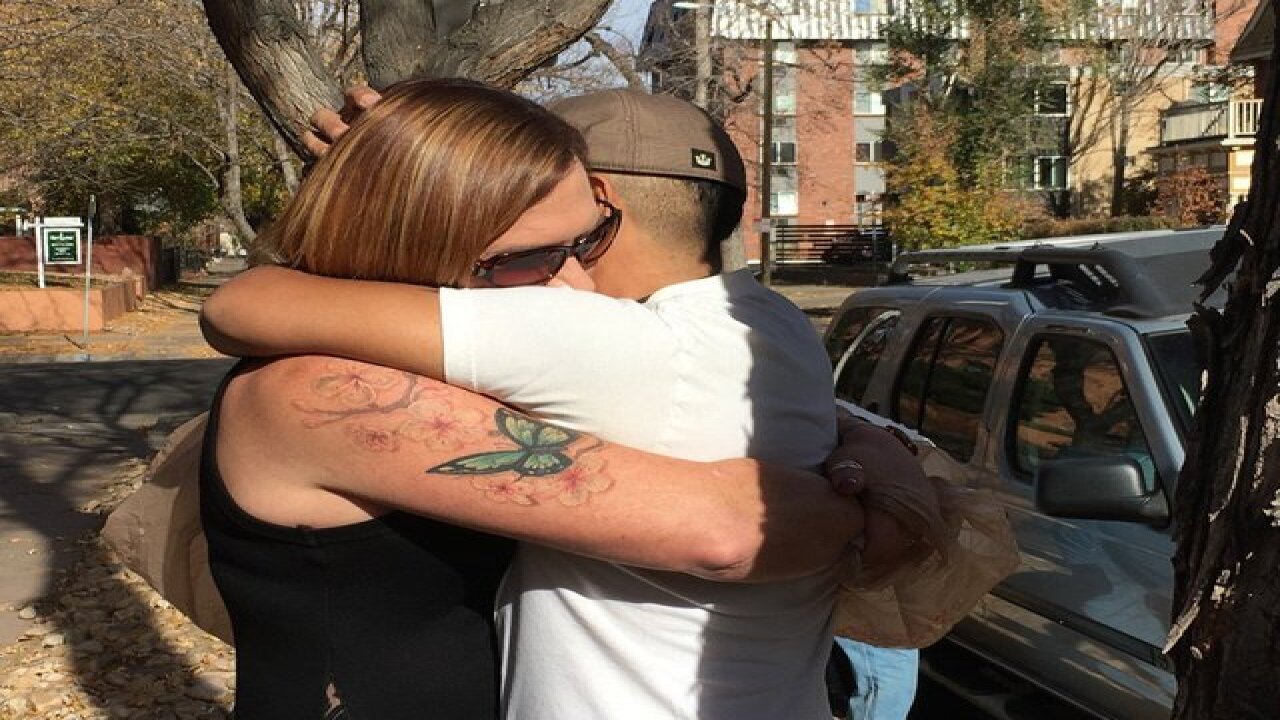 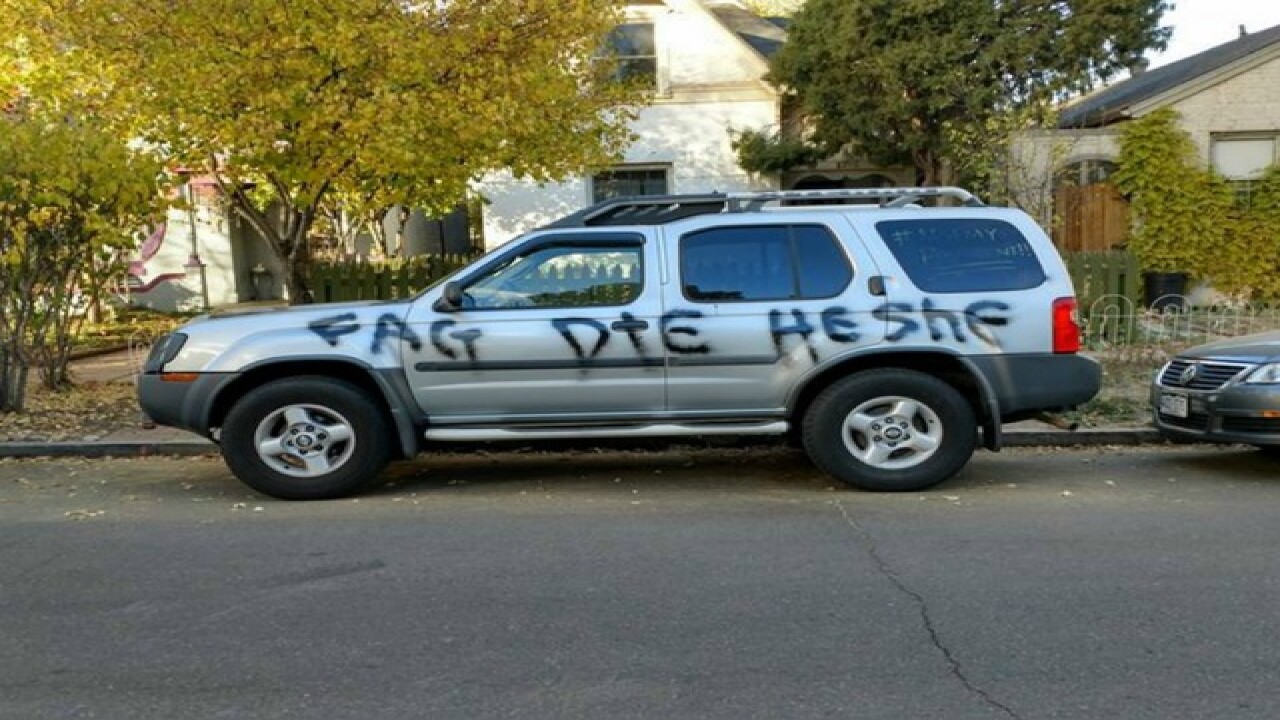 DENVER -- A transgender woman says she woke up to find her car vandalized with hate speech, a swastika and a pro-Donald Trump message in Denver's Capitol Hill Wednesday morning, and police are now investigating.

Amber Timmons posted photos of the hate speech spray-painted on her car Wednesday morning to Facebook.

“I got up this morning to go to work and the car was parked a couple of doors down. I came out and was surprised to see it all covered in graffiti and hate messages,” Timmons told Denver7.

Though she has since removed the post, a screenshot of it is available below.

Among the messages painted on her car were: “fag,” “die he she”, “tranny,” and “Trump.” A swastika was painted on the back tailgate.

A message saying, “Not my president,” appears to have been written on her car prior to the vandalism.

“It’s hard to describe; the first thought is shock. You just can’t believe it. You hear about it happening with others, but you never think it’s going to happen to you – especially here in Denver,” Timmons said. “And then it sets in and the first thing is fearful. You get scared and you fear everything that can and would happen. It’s a personal attack against me as a person.”

Timmons wrote on the post that police were called and showed up to investigate. She added that she went back inside her home, and walked back out to find encouraging sticky notes reading, “You are loved,” and “I am deeply sorry…love and peace wins always!”

There have been a slew of instances of vandalism involving hate speech across the country over the past week since the General Election. Swastikas and other forms of hate speech have been spray painted at schools and businesses nationwide as thousands of others protest the election of Donald Trump.

By 11 a.m., Timmons posted that a police report had been taken and that her friends had come over and were cleaning the paint off – apparently with quite good success, according to pictures she posted.

She told Denver7 her friend came over from Aurora and used a product called Goo-Gone to get the paint off.

Timmons said police came out and took pictures, along with the report.

"They went around to all the neighbors and talked to them because it happened so late at night," Timmons said. "Nobody saw anything or knew anything."

“We are successfully ERASING THE HATE!!!” Timmons wrote, with a picture of her car being cleaned. “We are not going down… You fight hate with love… so whoever did this… I LOVE YOU!! And love to everyone out there who came to my support and love. Thank you so very much!!!”

Timmons told Denver7 she assumes it was someone who knew her or at least about her. She added that she thinks the perpetrator might be someone emboldened by Trump’s election.

“Considering that it had ‘Trump’ all over my front hood, I think it’s directly related,” she said.

"Am I scared? Definitely," Timmons added. "But if I have to change my lifestyle, it means hate wins, and hate doesn't win. Love wins."

A different man in Boulder whose car was spray-painted with hate speech in the past week tells Boulder Daily Camera reporter Mitchell Byars that he painted the messages himself.

But Timmons maintains that she did not do the damage herself in this case.

"Why would I do this to myself? Why would I paint that type of hatred messages against myself? That's absurd," she said. "I would not subject myself to this type of fear and this type of insecurity that it did bring to me this morning, plus my friends.  I wouldn't put my friends through that either."

A neighbor of Timmons' said she was "horrified" at the vandalism, adding that she had "never seen anything like this."

Denver police say this is the third similar instance of vandalism they have seen in the past week. A spokesperson for the department says the investigation remains active but has yet to be assigned to a detective.