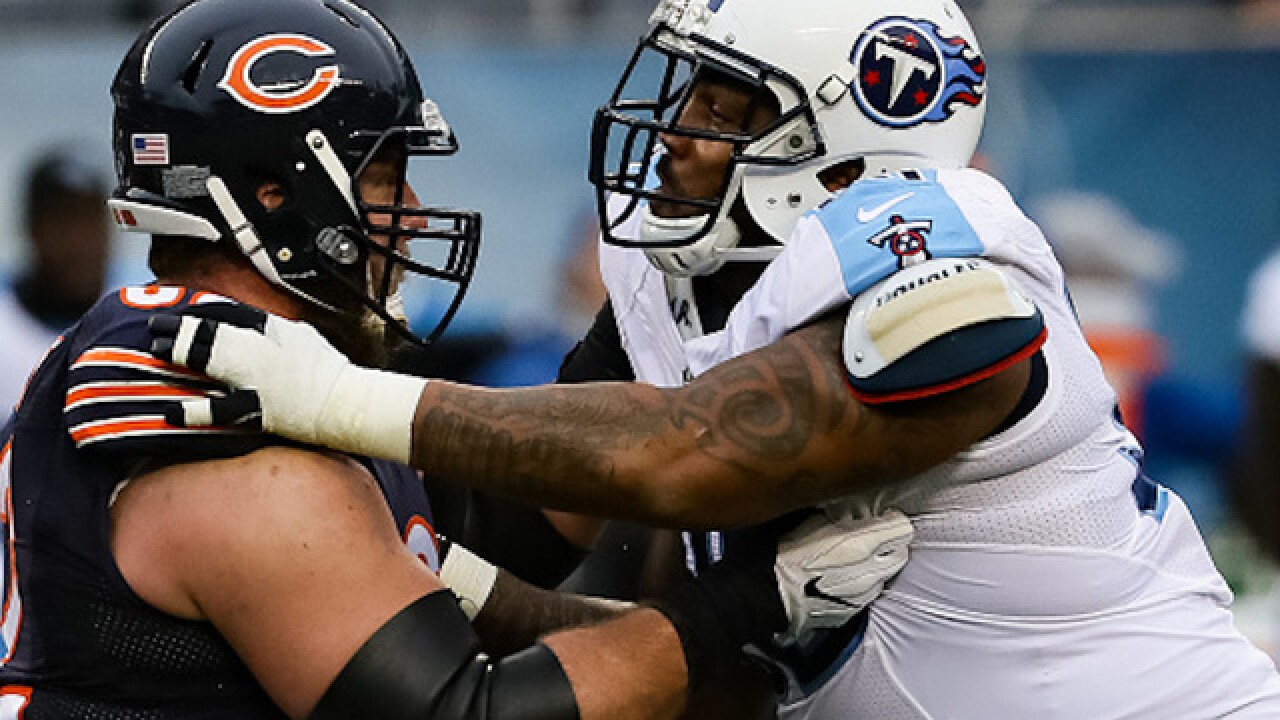 Image copyright 2018 Getty Images. All rights reserved. This material may not be published, broadcast, rewritten, or redistributed.
Jonathan Daniel
<p>CHICAGO, IL - NOVEMBER 27: Ted Larsen #62 of the Chicago Bears blocks Jurrell Casey #99 of the Tennessee Titans in the second quarter at Soldier Field on November 27, 2016 in Chicago, Illinois. (Photo by Jonathan Daniel/Getty Images)</p>

If the NFL thinks its new rule designed to quell player protests will end its national anthem controversy, it may want to think again.

With less than three weeks to go until the start of preseason, Tennessee Titans star defensive end Jurrell Casey told CNN Sport on Wednesday in an exclusive interview he will remain on the field and protest during the US national anthem, while accepting any fines levied on him this season.

"I'm going to take a fine this year, why not?" said Casey at an NFL promotional event in London. "I'm going to protest during the flag. That's what I'm going to say now."

Casey, coming off three straight Pro-Bowl appearances with the Titans, is the most prominent player so far to state his intention to flout the new NFL rules which dictate that players must either "stand and show respect for the flag and the anthem" or remain out of public view in the locker room.

The move by owners stems from the silent protests that began in 2016, when then-San Francisco 49ers quarterback Colin Kaepernick kneeled during the anthem to draw attention to racial injustice.

It also brought the wrath of US President Donald Trump, who in 2017 said players' kneeling showed "total disrespect for our great country."

As Trump weighed in on the debate last season, team owners and players searched for ways to protest in a unified manner.

Last September, Jacksonville Jaguars owner Shahid Khan locked arms with his players before a game at London's Wembley Stadium, while Dallas Cowboys owner Jerry Jones knelt with his entire team before the playing of the national anthem.

By October, Jones said the league was "suffering negative effects from these protests," and threatened to bench any player who took a knee.

'I'm going to take my fine'

NFL fines will be billed to teams, who have it in their discretion to enforce pre-game anthem observation as they see fit.

The NFL did not specify the amount of the fines, and left open the option of fining players directly by imposing "appropriate discipline on league personnel who do not stand and show respect for the flag and the anthem."

The rules were approved by all 32 NFL owners, with at least one -- San Francisco 49ers owner Jed York -- abstaining, while New York Jets co-owner Christopher Johnson said he would absorb any fines on behalf of his protesting players.

Titans controlling owner Amy Adams Strunk has indicated she accepts her players' rights to remain in the locker room, though has not made any public comment on those who protest on field.

It is unclear so far whether the NFL will have a zero-tolerance policy towards any form of protest surrounding the anthem, though at least one player appears set to test the boundaries.

"I'm going to take my fine," Casey added. "It is what it is, I ain't going to let them stop me from doing what I want to do. If they want to have these battles between players and organizations, this is the way it's going to be."

The veteran going into his eighth NFL season with the Titans noted that his actions will be a continuation from his protests last year, where he raised a fist after the anthem was played and "wanted to be respectful."

The 28-year-old signed a $60.4 million, four-year extension with the Titans in 2017, including $40 million of it guaranteed, according to the NFL.

'Guys are definitely not happy about it'

Neither Casey nor any of his Tennessee teammates have taken a knee during the anthem since the protests were sparked by former 49ers quarterback Kaepernick.

A former Super Bowl starting quarterback, Kaepernick did not latch onto a team last season, and had a tryout with the Seattle Seahawks canceled in April after he would not rule out protesting the anthem.

Kaepernick's situation does not sit well with Casey.

"I think he definitely deserves it," he said. "For all these trash quarterbacks you see that get a shot, that come in and sit on the bench all day, you got a starting quarterback that's out there that can go out there and play.

"You know he has the skill set to be a starting quarterback, and you hold him out just because he is speaking his mind. At the end of the day it speaks (volumes) on what these people really think about you."

Casey said he had not spoken to his coach Mike Vrabel or his Titans teammates about his decision, but was certain other players would follow suit in their own ways.

"Around the NFL, guys are definitely not happy about it," he said. "I feel it's not right, I don't think it was a good decision for the NFL to come up with that ruling. But they have their reasons for what they've done."

Additionally, Casey said he was prepared for publish backlash during the season.

Included in Trump's slew of harsh criticisms of the NFL protest last year was a call on owners to "Get that son of a bitch off the field."

Trump was also not impressed by the new NFL rule, blasting it at a rally in July, asking, "Isn't that worse than not standing?"

READ: Where is the European Colin Kaepernick?

"There is always going to be blowback, that is what America is about," Casey said.

"They always like to go on social media and go hard. It is what it is, at the end of the day, I don't pay no mind to it. I'm going to do what I do that's going to bring light to my community.

"At the end of the day we got to do a job," added Casey. "But I will continue to use my platform to keep on speaking up."

'It's not about the anthem'

Five other NFL players attended the London event, which featured a flag football tournament among youth players, with most indicating their desire to move on from the controversy.

"I take great pride in our national anthem," said Jaguars kicker Josh Lambo. "My grandfather served for the States in World War II, I represented my country for our (Under-17 soccer) national team, so that's important to me.

"I can't speak on other guys, but I will certainly be standing and singing regardless."

Philadelphia Eagles wide receiver Mack Hollins has a younger brother in the Marines, but the recent Super Bowl champion did not want to engage in a discussion on how the players viewed the new rules.

"I'll do whatever the team does. I'm not really into that," he said. "I play ball really, that's all I care about."

But not Casey, who stressed that ultimately, the protest was a means to draw attention to social injustice in the US -- a consistent message among players who have been vocal.

"It's not necessarily about the anthem, that's where everybody's messing up," he said. "The way that the justice system treats minorities is the issue that we have."

Three NFL games will be staged in London later this year, with the Seattle Seahawks playing the Oakland Raiders at English Premier League club Tottenham's new stadium on October 14.

The other two games are at Wembley Stadium, with the Titans facing the Los Angeles Chargers on October 21, while the Philadelphia Eagles play the Jaguars on October 28.