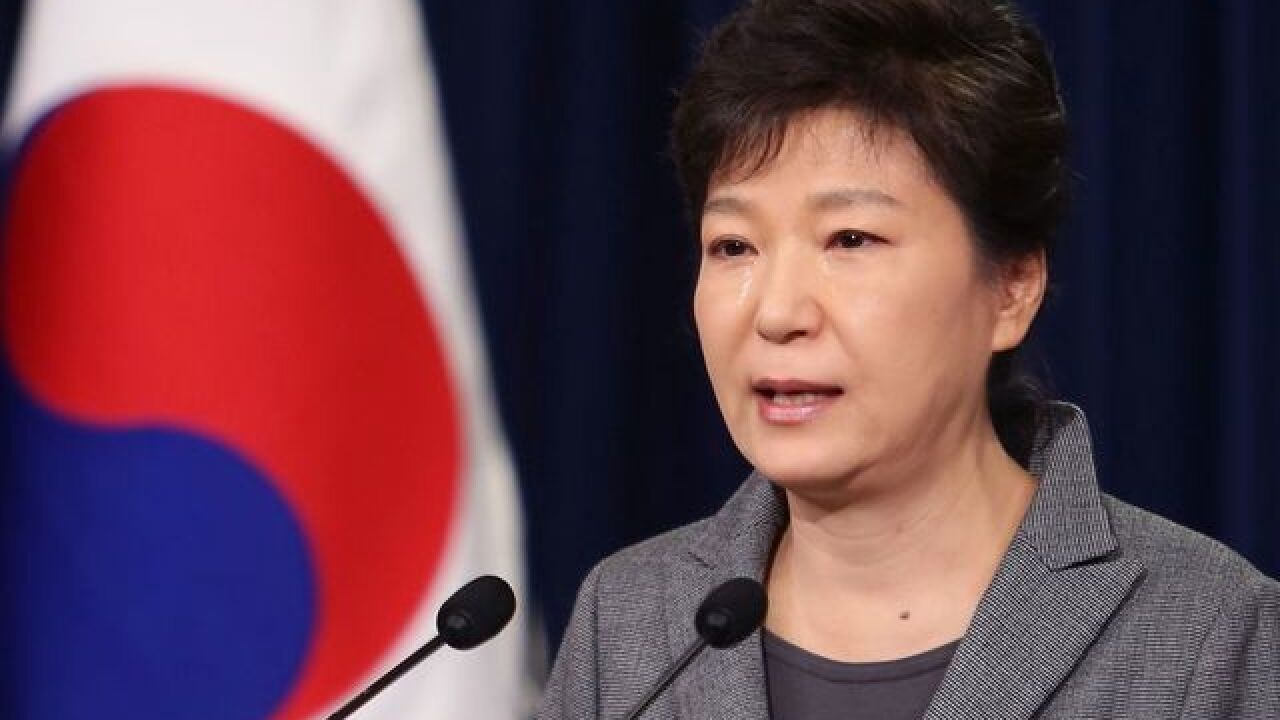 SEOUL (CNN) -- Lawmakers in South Korea's National Assembly have voted to impeach President Park Geun-hye. The vote passed by 234 votes to 56. There were six abstentions.

The country's constitutional court will now deliberate the motion, a process that could take up to 180 days.

Park apologized following the vote, saying she was careless and had caused a "big national chaos."

"I solemnly accept the voices of the National Assembly and the people and sincerely hope that the current confusion will come to an end in an orderly manner," she said.

"From now on I will respond to the impeachment judgment of the constitutional court and the investigation of the special prosecutors, following the procedures set by the constitution and the law with (a) calm mindset and then will accept its decision," Park said.

"In the meantime, I sincerely plead with the government officials and our public to carry on responsibly to protect the security and order of nation."

Park held a meeting with her Cabinet members at the presidential Blue House -- her final act as president before stepping aside for the deliberation.

Prime Minister Hwang Kyo-ahn is now acting President, and will hold the post for the duration of the court's deliberation.

Under the South Korean constitution, impeachment requires a two-thirds majority of the 300-member legislature to pass.

Thousands of South Koreans took to the streets to celebrate the news. National Assembly Speaker Chung Sye-kyun made the announcement, saying that the lawmakers had an obligation to restore order and to continue to execute the functions of the government.

In a phone call with defense minister Han Min-koo, Hwang said that under the current situation there is a possibility that North Korea could use the political upheaval to stir up trouble south of the 38th parallel, and that the South Korean military should maintain its readiness posture.

Park has faced terrible approval ratings and massive protests since it emerged that her confidante and adviser, Choi Soon-sil, had access to confidential government documents despite holding no official government position.

Choi is accused of using her relationship with Park to accumulate millions of dollars in donations to her foundations and has been detained after being charged with abuse of power, fraud and coercion.

The impeachment is only the country's second. In 2004, late President Roh Moo-hyun was also forced out of office for two months.

The Constitutional Court later restored Roh to power, rejecting charges of abuse of power and mismanagement.

Now that the parliament has voted to impeach, the reins will be handed over to Prime Minister Hwang. Ahead of Friday's vote, Hwang held a meeting with Cabinet members to ensure a smooth transition of power.

The court's nine members need to return a two-thirds majority to impeach.

In that case, a new election would be held within 60 days.

South Korean elections are "highly unpredictable. No one knows (who will win) until the last minute," John Delury, Associate Professor of Chinese Studies at Yonsei University Graduate School of International Studies, told CNN.

"That said, it's going to be extremely difficult for a candidate from (Park's) party to win -- there is such deep ill will and discontent toward her and her party." He added that there are about "half a dozen" serious contenders for the presidency if Park is removed. In the case of a general election, much of the parties' platforms will be domestically led, says Delury, with corruption and a separation between government and big business high on the agenda.

Why does this matter?

South Korea is a regional lynchpin and stalwart US ally, and the outcome of a general election, should the court rule that Park step down, could have security and economic implications in Asia and beyond. Should a liberal government come in in the aftermath of Park's ouster, changing priorities could swing the balance in the region.

In terms of its belligerent neighbor to the north, Kim Jong Un has been "quiet on this whole thing. He's doing two things, letting Park stew and getting a lot of domestic points in North Korea for saying: 'look how bad the South Korean government is.'

"That buys South Korea a bit of time as they get a new leader." Liberal governments tend to engage more diplomatically with the North, as opposed to Park's policy of sanctions.

A new government may also choose to align more closely with China, which could affect the US' current plans to implement its THAAD missile defense shield over the peninsula.

"If and when THAAD deploys we can expect some serious economic and security countermeasures," said Delury.

"Depending on the timing, this could be the first problem new South Korea leader faces."

In a recent poll by Gallup Korea, Park's approval rating was at 5% -- up a point from her dismal previous showing of 4%.

It also indicated showed that 81% of those polled supported her impeachment.

Last month, Park said that she would allow the National Assembly to decide the duration of her remaining term in office, and will resign if that is what they decide.

"I will relegate the decision to the National Assembly, including the shortening of my presidential term and resignation," she said.

"If the National Assembly sets a path for the stable transition of power, I will resign from the presidency and lessen the confusion as much as possible. I hope that the nation will find stability."

Prosecutors have said they want to speak to Park after naming her as a suspect in a corruption probe involving her confidante Choi and other aides.

Choi has been in detention for weeks after being indicted on charges of fraud, abuse of power and coercion, accused of extorting millions of dollars from big businesses for her foundations and personal use.

Offices have been raided, top executives hauled in for questioning and two of Park's former Presidential aides, among others, have also been indicted.

As President, Park is currently immune from prosecution. Though her lawyers have said she is willing to cooperate with the investigation, last month she claimed to be too busy to meet with prosecutors.