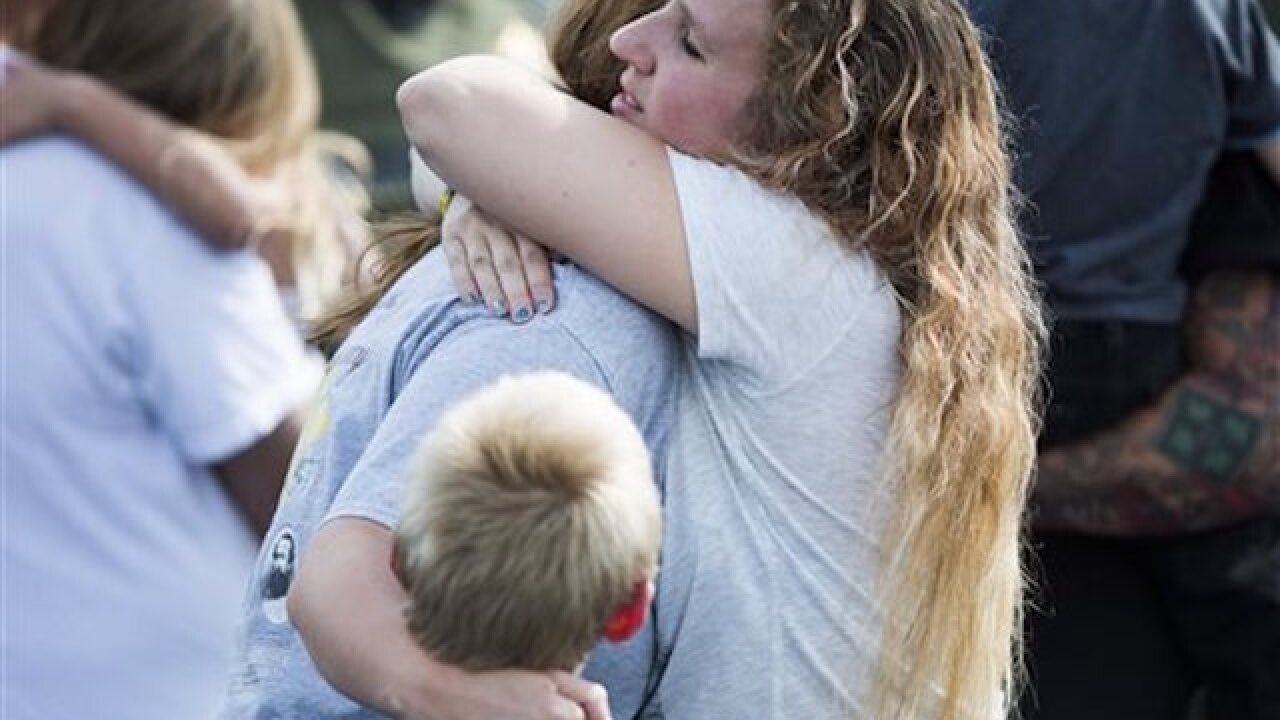 Copyright Associated Press
Katie McLean
<p>Korrie Bennett hugs Heather Bailey after recovering their children following a shooting at Townville Elementary in Townville Wednesday, Sept. 28, 2016. A teenager killed his father at his home Wednesday before going to the nearby elementary school and opening fire with a handgun, wounding two students and a teacher, authorities said. (Katie McLean/The Independent-Mail via AP)</p>

ANDERSON, S.C. (AP) — A 14-year-old South Carolina boy was charged as a juvenile Friday with murder and three counts of attempted murder after authorities say he killed his father and opened fire on students at a playground, wounding three people.

The boy did not show any emotion as he walked into the courtroom wearing a yellow jumpsuit. He did not have handcuffs or leg shackles on. A judge ordered the teen to continue to be held.

His mother sat on the front row during the brief hearing and left the courtroom sobbing and leaning on another woman.

The Associated Press typically does not identify juveniles charged with crimes. Authorities have not released a motive for the school shooting or killing.

Authorities say the teen shot his 47-year-old father at their home on Wednesday afternoon before driving a pickup truck 3 miles down a country road to Townville Elementary. The teen — who is not old enough to have a driver's license — had to make only two turns to arrive at the red brick school, where he crashed the truck, got out and started firing during recess.

Bullets struck two students and a first-grade teacher, and the building was immediately placed on lock down.

Though shot in the shoulder, the teacher "was with-it enough" to close the door, lock it and barricade the students, Avery said.

"If he'd gotten in the school, it would've been a different scenario," she said.

The shooter then fired toward students on the playground but missed. A teacher who heard the first gunshot was able to get those students safely inside, Avery said.

Relatives of one of the wounded, 6-year-old Jacob Hall, said he remained on life support in a hospital. His family issued a statement late Thursday saying the boy sustained a major brain injury due to the amount of blood he lost after being shot in the leg.

His older brother, Gerald Gambrell, told The Greenville News (http://grnol.co/2dJQVut) that the family is "hoping for a miracle."

A sign outside a diner conveyed the sentiments of an entire community: "Pray for Jacob. Pray for Townville."

The shot teacher and another student who was hit in the foot were treated and released from a hospital, officials said.

Classes are scheduled to resume at the school Monday.