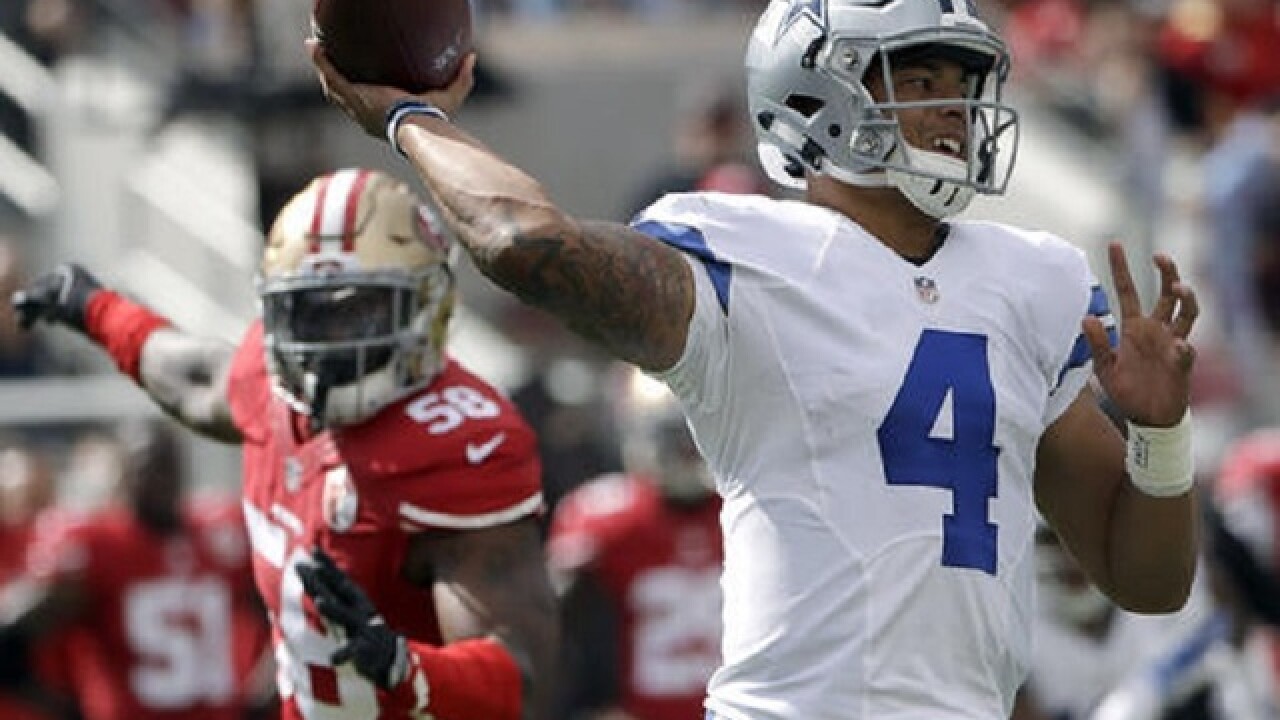 SANTA CLARA, Calif. (AP) — Ezekiel Elliott ran for 138 yards and a touchdown and Dak Prescott threw for two scores to help the Dallas Cowboys overcome an early 14-point deficit to beat the San Francisco 49ers 24-17 on Sunday.
The Cowboys (3-1) fell in a 14-point hole early in the second quarter before taking over the game behind a pair of rookies who have helped the team get off to a fast start this season with starting quarterback Tony Romo sidelined by a back injury.
Prescott threw for 245 yards and had a 20-yard touchdown pass to Terrance Williams and a 4-yarder to Brice Butler to tie the game at the half.
Elliott then took over with 96 yards rushing in the second half, including a 1-yard run that gave Dallas the lead for good late in the third quarter.
Blaine Gabbert got off to a fast start to help San Francisco (1-3) take the early lead but struggled to generate any offense after that. Gabbert finished 16 for 23 for 196 yards with one touchdown and one interception .
He had a chance to lead a late tying drive but he threw a 3-yard pass to Torrey Smith on fourth-and-6 from the Dallas 35 to end hopes at a comeback.
BIG LOSS: The Niners lost star inside linebacker NaVorro Bowman to a lower left leg injury in the third quarter. He went down with a non-contact injury and had to be helped off the field. He was then taken to the locker room on a cart and was immediately ruled out for the rest of the game. Elliott ran for 23 yards on the play after Bowman left. He had six carries for 50 yards and the TD on the drive after Bowman left.
FILLING IN: With star receiver Dez Bryant out with a hairline fracture of a bone in his right knee, the Cowboys needed someone else to step up on the outside. Butler, who came into the game with just one catch this season, had five catches for 41yards, including a 4-yard TD that tied the game at 14.
THIRD DOWNS: After failing to convert their first 10 third-down chances last week against Seattle, the Niners were quite efficient at the start this week. They converted seven straight third downs to open the game, including Gabbert's 33-yard TD pass to Jeremy Kerley and Hyde's 3-yard TD run . San Francisco then converted just one of its final seven third-down chances.
ANTHEM PROTEST: Six teammates of San Francisco 49ers quarterback Colin Kaepernick joined him for a protest during the national anthem on Sunday. Safety Eric Reid and linebacker Eli Harold kneeled beside Kaepernick. Defensive backs Antoine Bethea, Keith Reaser, Jaquiski Tartt and Rashard Robinson all raised their fists.
Copyright 2016 The Associated Press. All rights reserved. This material may not be published, broadcast, rewritten or redistributed.