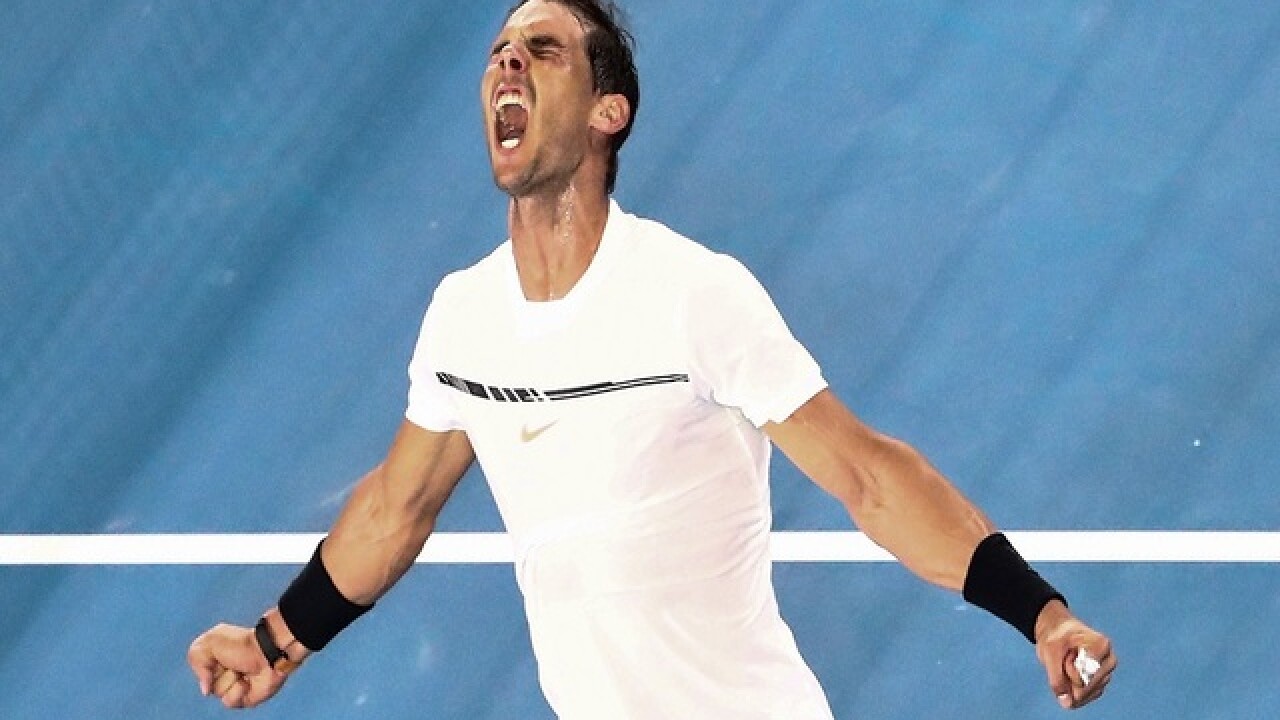 Copyright 2017 Scripps Media, Inc. All rights reserved. This material may not be published, broadcast, rewritten, or redistributed.
Scott Barbour
<p>MELBOURNE, AUSTRALIA - JANUARY 23: Rafael Nadal of Spain celebrates match point and winning his fourth round match against Gael Monfils of France on day eight of the 2017 Australian Open at Melbourne Park on January 23, 2017 in Melbourne, Australia. (Photo by Scott Barbour/Getty Images)</p>

By: CNN
Posted at 9:22 PM, Jan 25, 2017
MELBOURNE (CNN) -- A first grand slam final in six years between tennis titans Rafael Nadal and Roger Federer draws ever closer.
After Federer crushed Mischa Zverev at the Australian Open on Tuesday, Nadal had a more difficult time of it Wednesday but still overcame third-seed Milos Raonic in straight sets 6-4 7-6 (9-7) 6-4 to reach a first grand slam semifinal since winning his ninth French Open crown in 2014.
Once Nadal saved six set points in the second set, the Canadian's chance dissipated.
The 2014 champion in Melbourne, Stan Wawrinka, and a surging Grigor Dimitrov are likeable enough chaps but not many will want them to play party poopers when they respectively challenge Federer and Nadal in the last four.
Nadal said he isn't thinking about a potential encounter with Federer just yet.
"Let me enjoy today, the victory, being in a semifinal," Nadal told reporters. "For me it's great news again. It's a good start of the season.
"Now I have a very tough match against Dimitrov. What happens on the other side of the draw, I think it's great for tennis that Roger is there again after an injury."
The all-Swiss tussle between pals Federer -- who missed the last five months of 2016 as he recovered from a knee injury -- and Wawrinka kicks off the men's semifinals at Melbourne Park on Thursday, with Nadal facing Dimitrov a day later. Earlier Wednesday, Dimitrov cruised past No. 11 David Goffin 6-3 6-2 6-4.
The head-to-head records -- 18-3 to Federer and 6-2 to Nadal -- suggest they are the favorites to reach Sunday's final but Wawrinka will have a point to prove after a dismal performance against the 17-time grand slam winner when they met at the 2015 US Open.
Dimitrov, meanwhile, has won 10 straight matches and beat the 14-time grand slam winner in their last duel in Beijing late last year. The 15th-seed said he is thinking clearly on court, playing with a clear mind.
Nadal is doing just fine after a wrist injury affected the majority of his 2016 campaign.
Overcoming 19-year-old German Alexander Zverev in five sets in the third round gave him a huge jolt of confidence -- Nadal had lost his previous three fifth sets -- and the Spaniard bypassed a lapse to fend off French showman Gael Monfils in the fourth round.
Turning the tables
"I'm just excited to be back in final rounds of the most important events," said Nadal. "I am here to try to make this, no? Is always difficult, but I fought and I worked hard to try to make that happen.
"Very happy that after a lot of work, be in this round again. Is special thing for me."
Raonic beat Nadal only two weeks ago in Brisbane yet Nadal, despite all his injury woes, is still a different proposition over the best-of-five sets. He tweaked his return stance, moving in against one of tennis' best servers.
Nadal played impeccable tennis in the first set, hitting 12 winners and only two unforced errors. Those are numbers associated with the 30-year-old when he was in his prime.
Raonic took an off-court medical timeout at 3-2 in the second for what appeared to be a right thigh issue -- 12 months after a adductor problem in the same leg hampered him against Andy Murray on Rod Laver Arena in a five-set semifinal loss -- but didn't capitulate.
Nadal let Raonic off the hook at 4-4 with a pair of sloppy unforced errors and then saved three set points on serve at 4-5. Raonic will rue the second one, erring badly on a backhand.
There was more misery for Raonic in the tiebreak.
Nadal could have led 4-0 but missed a pair of forehands, so it was 2-2.
Raonic gained a 6-4 advantage, but a good serve from Nadal accounted for the fourth set point and the Canadian then double faulted long on the fifth.
On the sixth, at 7-6, he sent a forehand both wide and long. Adding to Raonic's frustration, on Nadal's first set point, Raonic's forehand clipped the tape and went wide.
There was no coming back for Raonic, who was broken to end the affair, and Nadal tallied his 50th Australian Open win.
Federer is back Thursday and Nadal on Friday.
They both could be back, too, in Sunday's final.
The-CNN-Wire
™ & © 2017 Cable News Network, Inc., a Time Warner Company. All rights reserved.
Copyright 2017 Scripps Media, Inc. All rights reserved. This material may not be published, broadcast, rewritten, or redistributed.