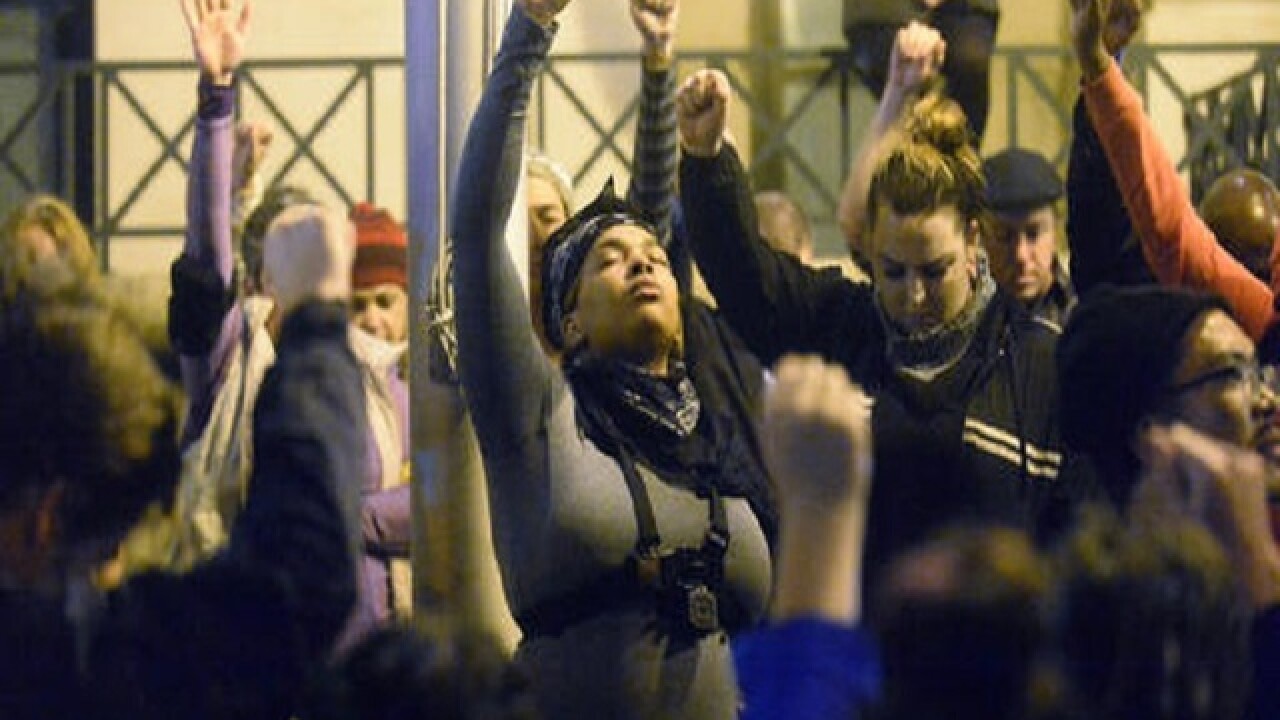 CHARLOTTE, N.C. (AP) — A prosecutor's decision to clear a Charlotte police officer in the killing of a black man left some African-American community leaders saying while the shooting may have been legal, it wasn't right.

Many of them called on Charlotte police to change their policies to encourage officers to use non-deadly force, improve their negotiating skills and train them to work on deescalating confrontations before they turn deadly.

"People of color are being shot in situations, many times, where persons who are non-black, doing some of the same things, or worse, are not shot. That is deeply concerning. Criminal activity does not automatically legitimize assassination or death on the spot," said the Rev. William Barber, president of the North Carolina chapter of the NAACP.

Barber and others called for a full federal investigation into the shooting of Keith Scott by Charlotte-Mecklenburg police Officer Brentley Vinson in the parking lot of his apartment complex in September. And Scott's family said they would conduct their own investigation now that the State Bureau of Investigation's evidence in the case has been released.

Scott family attorney Justin Bamberg said he understood why the district attorney decided not to file charges. "That does not mean that this officer's killing of Keith Scott was right. All that means is that under the view of the DA's office, it wasn't criminal. And those are two completely different things," Bamberg said.

Charlotte police released a statement saying they have invited the independent, Washington-based The Police Foundation to review the department's policies, will ask a judge to release body camera footage on any incident where someone is seriously hurt or killed by an officer as soon as prosecutors allow it and are asking for expanded power for its citizen review panel.

Several dozen protesters gathered Wednesday night at Charlotte police headquarters, saying Murray's report was a cover-up to protect white officers who actually shot Scott. They remained calm, unlike the two days of protests in North Carolina's largest city after the shooting. Protests over Scott's death led to more than 100 arrests, two dozen injuries and one death.

Much of Murray's presentation centered on the gun and debunking witnesses who said Scott wasn't armed.

Murray displayed a store's surveillance video taken shortly before the incident, showing the outline of what appeared to be a holstered gun on Scott's ankle. He said Scott's DNA was found on a Colt .380-caliber semi-automatic handgun recovered at the scene.

He shared a Facebook conversation from the man who said he sold the stolen gun to Scott and recognized him from TV coverage after the shooting, and police radio traffic where officers talked about the gun before confronting Scott.

Murray said his team of homicide prosecutors reviewed the evidence, along with other lawyers. He said the investigation relied on 63 State Bureau of Investigation agents working for 2,300 hours. Murray said every one of them agreed with his conclusion.

"All of the credible, available and believable evidence supports the conclusion that Scott was armed with a gun," Murray said.

Even after being cleared of criminal charges, Vinson remains on administrative leave because Charlotte police have not finished their internal investigation, police spokesman Robert Tufano said.

The shooting happened after plainclothes officers went to the complex looking for a suspect with an outstanding warrant when two undercover officers saw Scott — not the suspect they were looking for — inside a car with a gun and marijuana, Murray said.

The officers said they would have ignored the marijuana, but the gun made the situation dangerous to others. They left to get backup, then returned to arrest Scott, Murray said.

Officers said Scott exited the SUV with a gun, ignored at least 10 orders to drop the weapon and appeared to be in a trance, Murray said.

Scott's wife, Rakeyia, told reporters and investigators her husband had no gun. But in August, the couple had argued on text messages about the weapon, with Rakeyia Scott reminding her husband he could get 25 years in prison because he was a felon who wasn't supposed to have one.

Murray also debunked comments from several witnesses and Rakeyia Scott to reporters that said either Keith Scott didn't have a gun or was shot by more than one officer. The SBI found some of them couldn't have seen what they said they saw from their vantage points and others said they were influenced by hearing other interviews.

The case was among a series across the country since mid-2014 that spurred a national debate over race and policing.