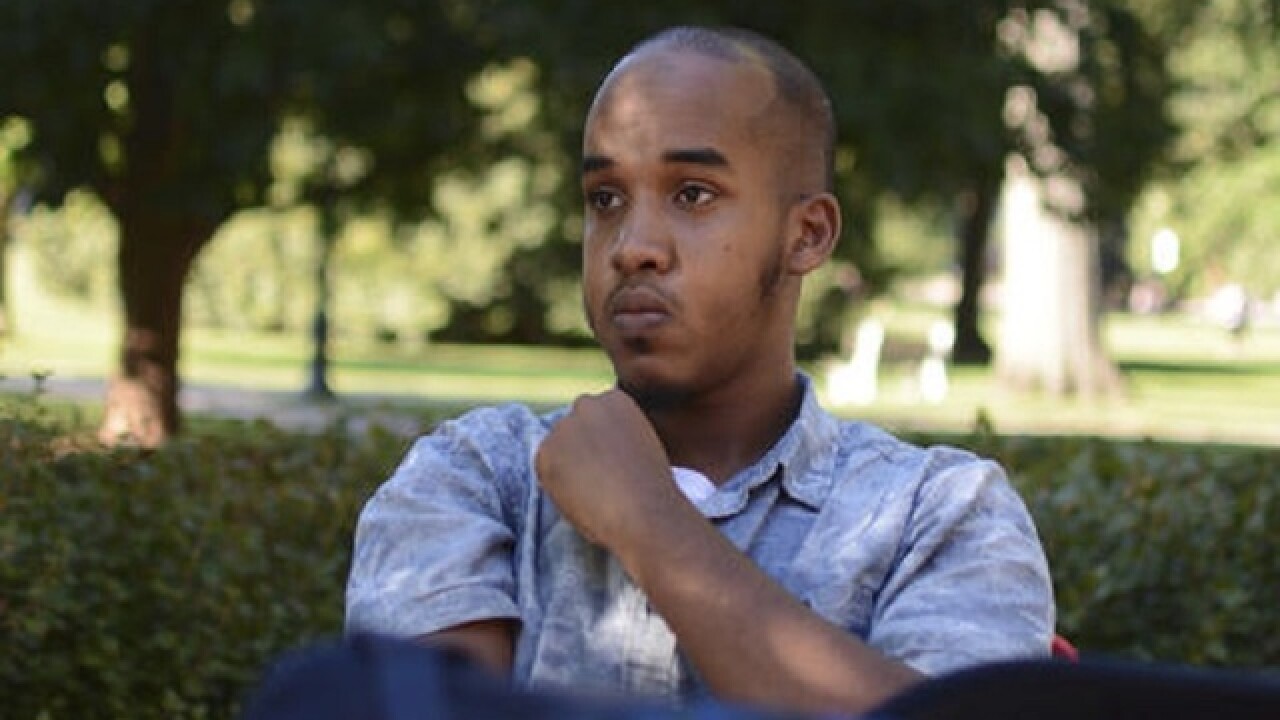 COLUMBUS, Ohio (AP) — A Somali-born student who carried out a car-and-knife attack at Ohio State University stewed over the treatment of Muslims while apparently staying under the radar of federal law enforcement, underscoring the difficulty authorities face in identifying and stopping lone wolves bent on violence.
Abdul Razak Ali Artan was not known to FBI counterterrorism authorities before Monday's rampage, which ended with him shot to death by police and 11 people injured, a law enforcement official told The Associated Press.
That's in contrast to several other recent attacks, including those in New York City; Orlando, Florida; and Garland, Texas, in which those blamed for the bloodshed had previously come to the attention of federal agents.
Law enforcement officials have not identified a motive for the Ohio State violence but have suggested terrorism as a possibility. FBI agents continued to search Artan's apartment for clues, but California U.S. Rep. Adam Schiff, the top Democrat on the House Intelligence Committee, said he had seen no evidence Artan was directed by or was in communication with any overseas terror organization.
The mode of attack — plowing a car into civilians, then slashing victims with a butcher knife — was in keeping with the recommended tactics of jihadist propaganda. And Facebook posts that were apparently written shortly before the attack and came to light afterward show Artan nursed grievances against the U.S.
He railed against U.S. intervention in Muslim lands and warned, "If you want us Muslims to stop carrying lone wolf attacks, then make peace" with the Islamic State group.
"America! Stop interfering with other countries, especially the Muslim Ummah. We are not weak. We are not weak, remember that," he wrote, using the Arabic term for the world's Muslim community.
He also warned that other Muslims are in sleeper cells, "waiting for a signal. I am warning you Oh America!"
The posts were recounted by a law enforcement official who was briefed on the investigation but wasn't authorized to discuss it publicly and spoke on the condition of anonymity.
On Tuesday, a self-described Islamic State news agency called Artan "a soldier of the Islamic State" who "carried out the operation in response to calls to target citizens of international coalition countries." The Islamic State group has described other attackers around the world as its "soldiers" without specifically claiming to have organized the acts of violence.
Artan's social media rants seemed at odds with the portrait of the young man painted by neighbors and acquaintances.
Jack Ouham, owner of a market near the home on the outskirts of Columbus where Artan lived with his parents and siblings, saw him almost every day when he stopped in for snacks but never alcohol or cigarettes.
He was never angry, Ouham said.
"Very nice guy," he said.
Artan graduated with honors from Columbus State Community College last May, earning an associate of arts degree. A video of his graduation ceremony shows him jumping and spinning on stage and smiling broadly, drawing laughs, cheers and smiles from graduates and faculty members.
The school said he had no behavioral or disciplinary problems while he was there from the fall of 2014 until this past summer.
He started at Ohio State in August as a business student studying logistics management.
A law enforcement official said Artan came to the U.S. in 2014 as the child of a refugee. Artan had been living in Pakistan from 2007 to 2014. It's not uncommon for refugees to go to a third-party country before being permanently resettled.
Federal and local authorities grappling with the pervasiveness of Islamic State group propaganda — FBI Director James Comey said this year that agents had "north of 1,000" terrorism-related probes — will no doubt look to see if they missed any red flags that could have placed Artan under investigation.
Several acts of jihadist-inspired violence in the past two years have involved people known to the FBI.
The FBI investigated Omar Mateen, the gunman in the Orlando nightclub attack in June, for 10 months in 2013 after he boasted of mutual acquaintances with the Boston Marathon bombers and said things to co-workers that suggested he had radical, violent intentions. Agents found nothing to justify continued scrutiny and closed the matter but looked into him again the next year as part of a separate investigation into a suicide bomber who attended the same Florida mosque.
Federal authorities in 2014 looked into Ahmad Khan Rahimi after he was accused of stabbing a relative and his father expressed concerns he might be a terrorist. The FBI said it found nothing in its databases tying Rahimi to terrorism and closed its review. Rahimi was charged with setting off bombs in New York and New Jersey in September; he has pleaded not guilty.
FBI counterterrorism authorities have a "number of trip wires" set up to spot would-be jihadists and have a generally good sense of people who are drawn to terrorist propaganda, which is why many who have gone on to commit violence had come under scrutiny, said Seamus Hughes, deputy director of the George Washington University's Program on Extremism.
"If you look at most quote-unquote successful terror attacks in the U.S. ... they've always had some touch point with law enforcement and been on law enforcement's radar in some point in their radical trajectory," Hughes said.
Classes for the 60,000 students at Ohio State were canceled after the attack but resumed Tuesday. The university planned a vigil for Tuesday night.
Copyright 2016 The Associated Press. All rights reserved. This material may not be published, broadcast, rewritten or redistributed.