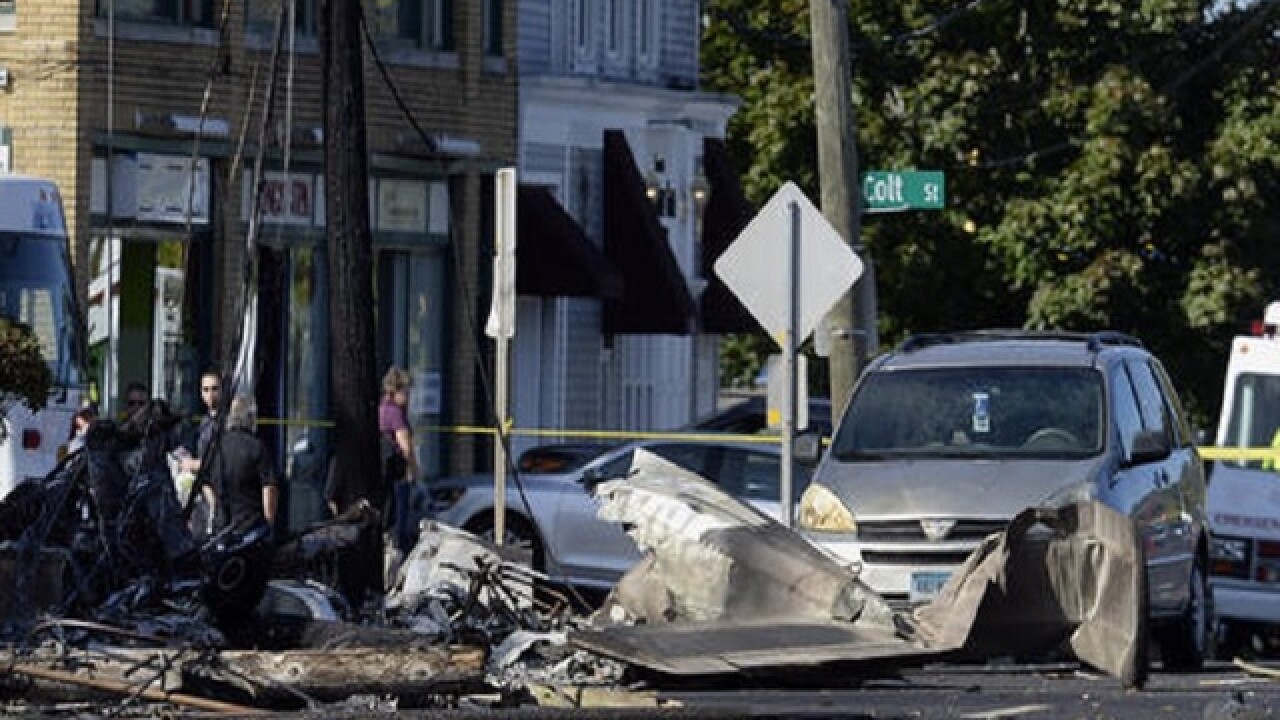 Jessica Hill
<p>The remains of a small plane are seen along Main St, Wednesday, Oct. 12, 2016, in East Hartford, Conn., a day following the plane's crash. The FBI is taking over as lead investigator in the deadly crash of a small plane carrying a flight instructor and a student pilot because of indications that it might have been a criminal act, safety officials said Wednesday. (AP Photo/Jessica Hill)</p>

By: Associated Press
Posted at 11:40 PM, Oct 12, 2016
EAST HARTFORD, Conn. (AP) — A plane crash that killed a student pilot and left his flight instructor with serious burns appears to have been a suicide attempt, a U.S. official familiar with the investigation said.

The two men had an altercation inside the cockpit of the small plane and the instructor was unable to regain control from the trainee before it crashed near the Connecticut headquarters of a military jet engine manufacturer, according to the official, who was not authorized to speak publicly and spoke Wednesday on the condition of anonymity.

The Piper PA-34 Seneca crashed with the two men aboard during a training flight Tuesday in East Hartford near the headquarters of Pratt & Whitney, while returning to Brainard Airport in Hartford, authorities said. The flight instructor was badly burned, but survived.

The instructor described the student pilot as disgruntled about learning to be a pilot, the U.S. official said.

The flight instructor is Arian Prevalla, 43, and the student was Feras Freitekh, said a law enforcement official, who wasn't authorized to disclose the information and spoke to the AP on condition of anonymity.

Prevalla's social media pages indicate he is president of the American Flight Academy and a managing member of the Hartford Jet Center, both based in Hartford. The pages say he originally is from Albania and now lives in Hartford. On LinkedIn, Prevalla said he received a bachelor's degree in Aviation Science from Mountain State University, a now-defunct university in Beckley, West Virginia.

Public records show Freitekh received a private pilot certificate last year from the Federal Aviation Administration. They also indicate he lived in the Chicago suburb of Orland Hills since 2013, but authorities there said that there was no record he ever lived in the village but that he received mail there at the home of a friend of his father, who worked for a container company in a nearby town.

The survivor told police detectives it was not an accident, according to East Hartford Mayor Marcia Leclerc.

"It's troubling," Leclerc said. "But I also know that stories change and information can be skewed. We're waiting for the facts to come out."

Authorities said the student and instructor were about to land at Brainard Airport in Hartford when the plane struck a utility pole and crashed onto the road at around 4 p.m. Tuesday, bursting into flames. The crash site is a short distance from the airport, across the Connecticut River and in line with the runway.

"The path that the plane took could have been much worse. So we're very fortunate in that sense," East Hartford Police Chief Scott Sansom said.