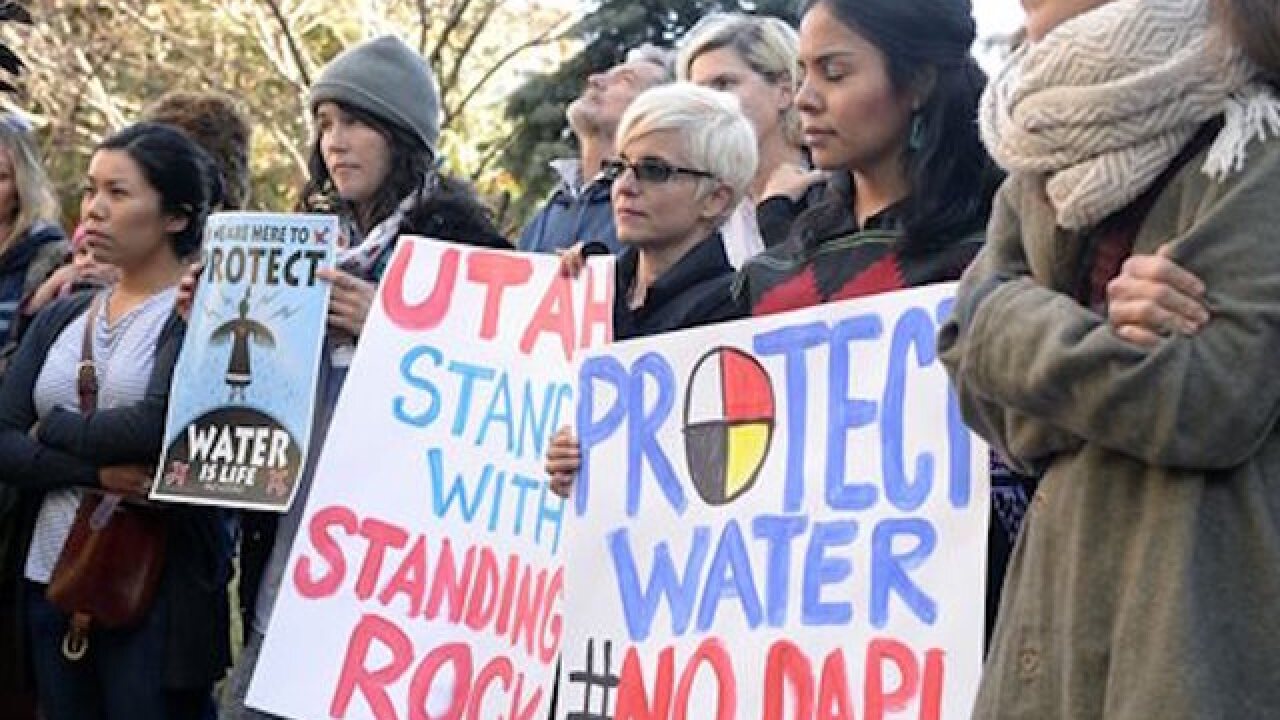 Copyright Associated Press
Al Hartmann
<p>Protesters demonstrate in Salt Lake City in support of the Standing Rock Sioux against the Dakota Access Pipeline, Monday, Oct. 31, 2016. Following a rally at the Gallivan Center, the diverse group of over 100 marched half a block to the Wells Fargo Center building, where they held a protest in the lobby. Wells Fargo is one of several major banks financing the pipeline. (Al Hartmann/The Salt Lake Tribune via AP)</p>

BISMARCK, N.D. (AP) — President Barack Obama says the U.S. Army Corps of Engineers is examining whether the four-state Dakota Access oil pipeline can be rerouted in southern North Dakota to alleviate the concerns of American Indians.

Obama told the online news outlet NowThis that his administration is monitoring the situation closely but will "let it play out for several more weeks."

"As a general rule, my view is that there is a way for us to accommodate sacred lands of Native Americans, and I think that right now the Army Corps is examining whether there are ways to reroute this pipeline," Obama said an interview Tuesday.

The White House said the corps was exploring a range of options that would address concerns raised by tribal officials and others. Separately, the Army, the Justice Department and the Interior Department are discussing with tribal governments how to prevent future disputes with the federal government over public works projects, according to the White House.

The 1,200 mile, $3.8 billion pipeline will carry oil from North Dakota through South Dakota and Iowa to a shipping point at Patoka, Illinois. It will skirt the Standing Rock Sioux Reservation that straddles the North Dakota-South Dakota border.

The tribe objects to the project, saying it could threaten drinking water and destroy sacred sites. The tribe has sued federal regulators for approving permits at more than 200 water crossings.

Protests that have included clashes with police and pipeline security also have gone on for several months in North Dakota, where hundreds and at times thousands of people have set up a large camp on corps land. More than 400 protesters have been arrested since August. No serious injuries have been reported.

Obama called it "a challenging situation."

The 1,200-mile pipeline is largely complete outside of North Dakota. The federal government in September ordered a temporary halt to construction on corps land around and underneath Lake Oahe, a Missouri River reservoir in the Dakotas. The corps is reviewing its permitting of the project, but has given no timetable for a decision.

The Justice Department has asked pipeline developer Energy Transfer Partners to voluntarily stop construction within 20 miles of the lake, but construction has continued on private land.