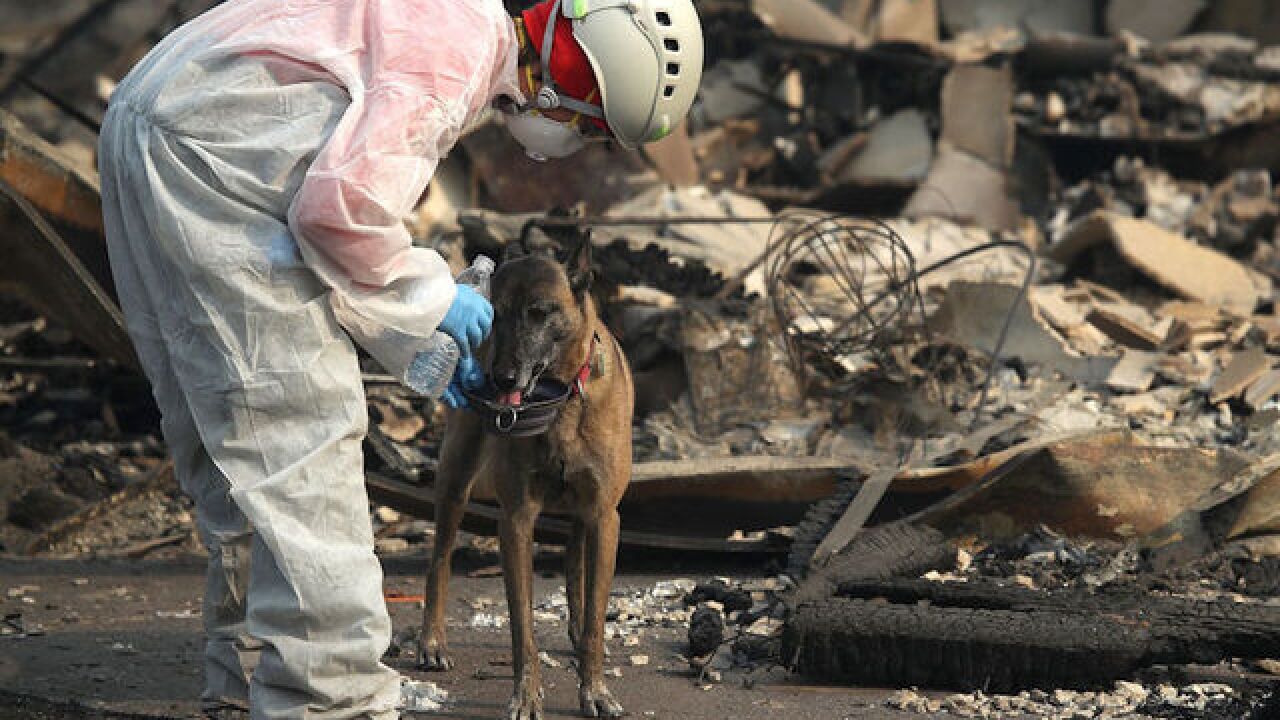 Image copyright 2018 Getty Images. All rights reserved. This material may not be published, broadcast, rewritten, or redistributed.
Justin Sullivan
<p>A rescue worker gives her cadaver dog water as they search the Paradise Gardens apartments for victims of the Camp Fire on November 16, 2018 in Paradise, California.</p>

More than 1,000 people are unaccounted for and thousands of survivors are living in cars and tents as California's deadliest wildfire enters a second week.

"It is overwhelming, I don't have any word to describe it," Butte County Sheriff and Coroner Kory Honea told CNN on Saturday. "This is unprecedented. No one has had to deal with this magnitude that caused so much destruction and regrettably so much death."

Saturday, President Donald Trump went to California and got a firsthand look at the burned-out town of Paradise, where many breathing-mask-wearing onlookers stood by the road taking photos. Accompanying Trump were Gov. Jerry Brown and Gov.-elect Gavin Newsom.

"We're all going to work together and we'll do a real job, but this is very sad to see," Trump said.

With the Camp Fire's death toll now at 71, the list of those missing from the fire zone has grown to 1,011 names, though that may change after authorities follow up with families, officials cautioned.

The deadliest and most destructive wildfire in state history, the Camp Fire has destroyed more than 9,800 homes and scorched 148,000 acres since starting November 8. It was 55% contained as of Saturday morning.

Meanwhile, three more deaths were reported in the Woolsey Fire in Southern California, bringing the statewide death toll from the wildfires to 74.

More than 230,000 acres have burned in California in the past week -- an area larger than Chicago and Boston combined. In the past 30 days, firefighters have battled more than 500 blazes, said Cal Fire, the state's forestry and fire protection agency.

Even as the list of those missing in the Camp Fire has ballooned, it's hard to tell exactly how many people truly are lost, officials have said.

"That is raw data we're collecting from phone calls, emails and the 911 system," Honea said Saturday. "It's not perfect data, but our thought process is that it's better to get that information out to help start getting people accounted for. So rather than wait for perfection, we're trying to get some progress going."

Hundreds of deputies, National Guard troops, coroners and anthropologists are sifting through leveled homes and mangled cars for remains.

Officer Matthew Gates of Paradise searched for two days through ash and collapsed buildings for the remains of a woman who, her son thought, likely had been driving on a jammed road that hundreds used to flee Camp Fire.

Gates finally came across her at an evacuee shelter.

"She had burns up her arms, and I knew it was her," the officer told CNN affiliate KRCR. "I went and gave her a hug because I've been looking for her body."

Some who may have evacuated can't be reached because cell phone service is unreliable, while others haven't reached out to relatives, Honea said earlier this week. Many may not know someone is searching for them.

If people find their own or loved ones' names on the list at the Butte County Sheriff's Office's website, they should call the sheriff's office, Honea said.

'I see flashbacks of the fire'

A week after her family narrowly escaped as the Camp Fire closed in on Paradise, Whitney Vaughan said she feels like giving up.

Everything she and her husband, Grady, own is gone, along with a home they were renting, "a quirky older house with lots of character and lots of room" for their six children, she said.

The children can stay with relatives, but she and her husband have nowhere to go, Vaughan said.

"So, now we are homeless, have no money, are trying to find a place," Vaughan said. "There are just too many people in the same situation. ... This fire has changed us in ways I can never explain."

More than 98,000 acres have been burned since the blaze began November 8, while evacuees remain in shelters, and portions of Malibu and nearby areas must be rebuilt, officials said. It was 82% contained on Saturday morning, Cal Fire reported.

Smoke from the wildfire has prompted several universities to cancel or postpone sporting events. That includes the University of California, Berkeley men's basketball game, which was called off Thursday night, and its Saturday football game, which was rescheduled for December 1.

In the midst of despair, hope remains. The mayor of Paradise told CNN Saturday that she is committed to rebuilding her town, as is the town council.