North and South Korea commit to 'era of no war' 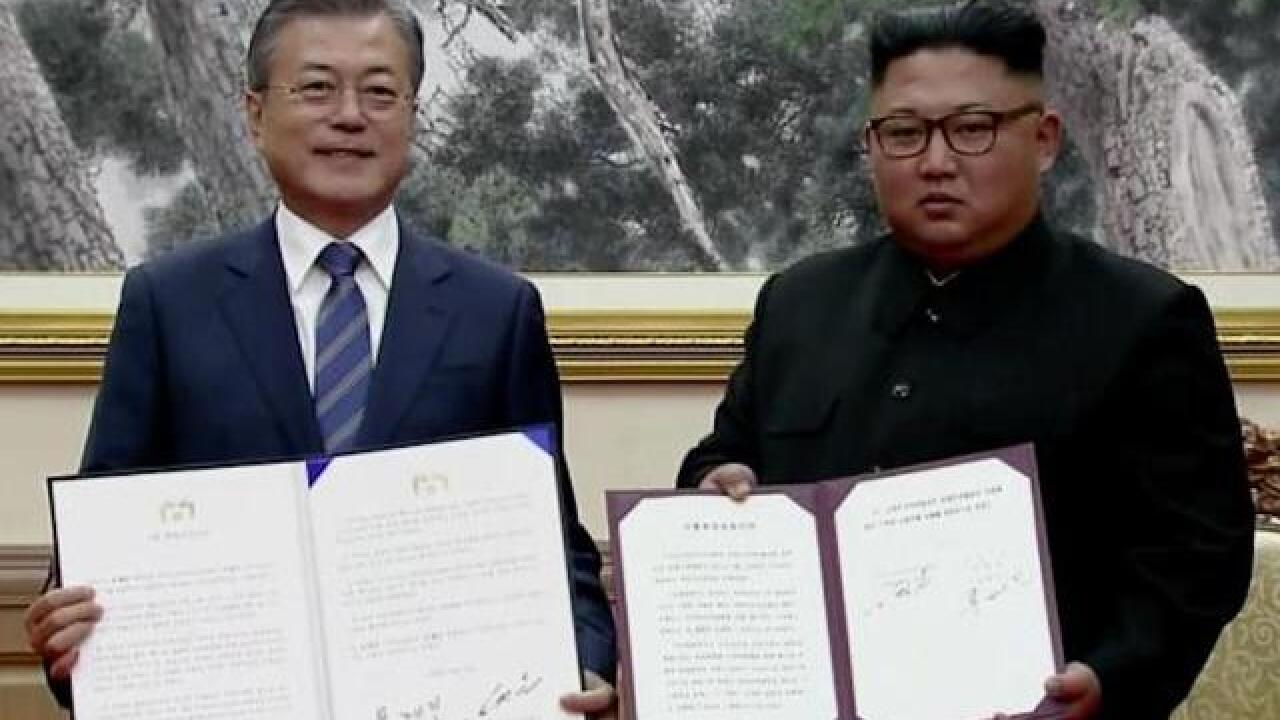 The two leaders made the announcement on the second day of a three-day summit, their third this year, as part of efforts with the United States to contain the threat of war on the Korean Peninsula.

Speaking to the media Wednesday after a brief signing ceremony, Kim and Moon vowed to bring peace to the Korean Peninsula once and for all, something they first committed to at their  April summit .

"The world is going to see how this divided nation is going to bring about a new future on its own," Kim said to applause from those gathered.

Moon and Kim teased a potential historic fourth meeting between the two leaders, this time in the South Korean capital. The signed agreement stated that Kim would travel to Seoul "as soon as possible," something no North Korean leader has ever done. Kim's father, Kim Jong Il, agreed to visit Seoul, but never followed through.

Both countries' defense chiefs also signed a 17-page accord in which the two countries vowed to "cease all hostile acts against each other."

"The era of no war has started," said Moon, the first South Korean president to visit Pyongyang since 2007. "Today the North and South decided to remove all threats that can cause war from the entire Korean peninsula."

The two countries also pledged to:

The ball is in Washington's court

In the agreement signed Wednesday, Pyongyang pledged to destroy both the Tongchang-ri missile engine test site and the Yongbyon nuclear site, which is believed to be used for the production of fissile material, if the United States takes reciprocal measures.

Analysts say the ball is now in Washington's court.

It's been more than three months since Kim met US President Donald Trump in Singapore, and negotiations between the two sides appear to have hit an impasse. Kim's offer, however, could provide a way to jump start talks, analysts say.

"What the United States needs to be looking for right now are genuine steps from the North Koreans that indicate a willingness to move the process forward. If North Korea is genuinely willing to close down Yongbyon and to allow in inspectors ... those are just partial steps, but those are genuine steps forward," said Michael Fuchs, a senior fellow at the Center for American Progress and former deputy assistant secretary of state for East Asian and Pacific affairs.

"The biggest outstanding question still remains -- what price the North Koreans want to extract from the United States," Fuchs said.

Standing side by side with Kim in Pyongyang, Moon expressed hope on Wednesday that talks would resume between North Korea and the US.

"They have continuously shown their trust towards one another and I hope there will be another summit between the two countries as soon as possible," Moon said.

Moon's spokesman, Yoon Young-chan, announced later in the day that the South Korean President would travel to the US to meet with Trump on September 24.

An end to the war

Moon and his top advisers have consistently said they want to make inter-Korea meetings a regular part of North-South relations and see them as a helpful step in establishing a permanent peace.

"Chairman Kim and I share the history of having held hands like lovers and crossed the Military Demarcation Line together twice," Moon said during a toast at a banquet Tuesday evening.

"The fact that the leaders of Koreas can meet without limit in time or place symbolically demonstrates that a new age of inter-Korean relations has arrived," he added.

Ahead of this week's talks, it was expected that two leaders would continue to work to formally end to the Korean War, which ended in an armistice 65 years ago.

While a formal peace regime officially ending the Korean War would need buy in from the US and China -- the other participants in the conflict -- experts agree that there is nothing to stop the two Koreas declaring an end to the war themselves, or signing a bilateral peace treaty.

A big part of any negotiation to end the war would be the status of the thousands of US troops stationed in South Korea as part of the two countries' alliance. The North has long seen the US military's large footprint in South Korea as a direct threat.