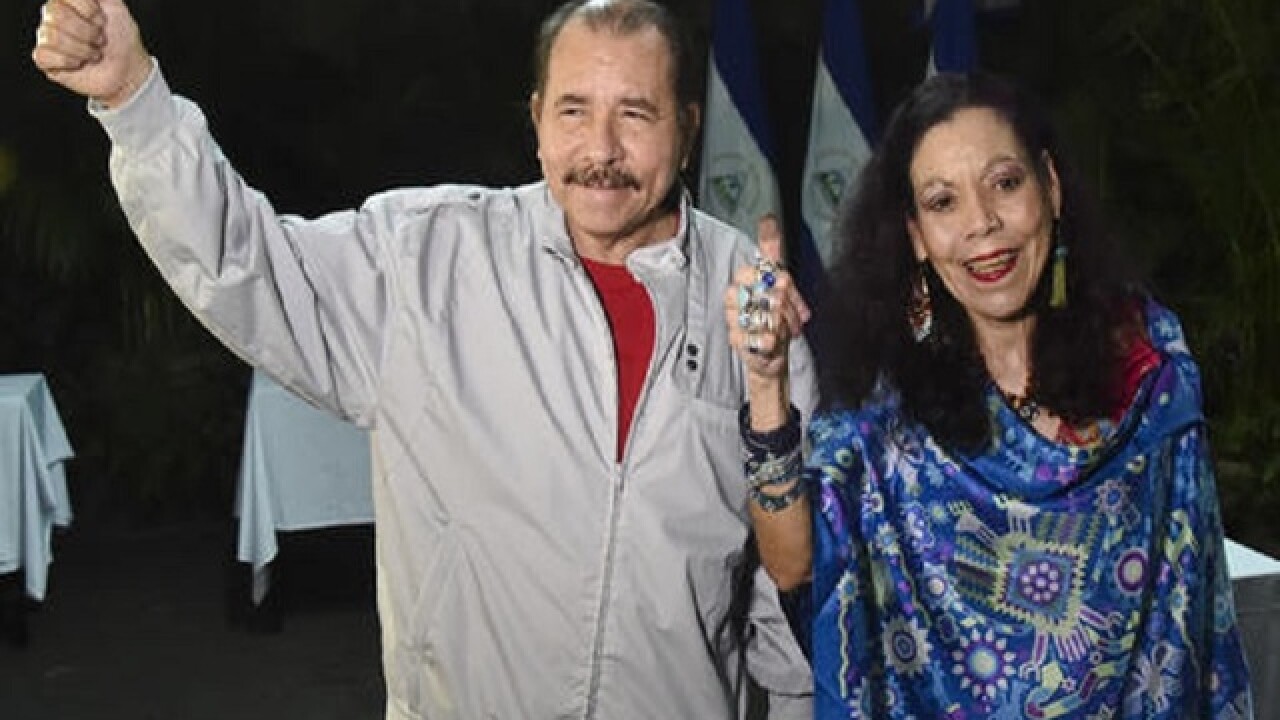 Rodrigo Arangua
<p>Nicaragua's President Daniel Ortega and his wife, vice presidential candidate Rosario Murillo show their marked thumbs after voting at a polling station near a his home in Managua, Nicaragua, Sunday, Nov. 6, 2016. Ortega appears headed for a a third consecutive term victory in the general election, but critics accused Ortega and his allies of manipulating the political system to guarantee he stays in power by dominating all branches of government. (Rodrigo Arangua/Pool via AP)</p>

MANAGUA, Nicaragua (AP) — President Daniel Ortega cast his ballot just before polls closed in Nicaragua's elections Sunday evening, and he appeared to have a clear path to a third consecutive term — this time accompanied by his wife as vice president.
Going into the election, opinion polls said the former guerrilla fighter was likely to receive more than 50 percent of the votes and avoid a runoff in a field that included five other lesser-known candidates. He was running with his wife, Rosario Murillo, as his vice presidential candidate.
"It is an exemplary, historic election," Murillo said after she and her husband voted, while critics of the government called the vote unfairly tilted against the opposition.
Ninety-two congressional seats were also being contested. First returns were not expected until late Sunday.
Electoral council chief Roberto Rivas said early in the day that there was high turnout among Nicaragua's 3.8 million registered voters, although officials did not report any specific estimate. The main opposition group, the Broad Front for Democracy, said late in the day that turnout was low and that many voters had heeded a call to boycott the election.
Ortega and his leftist Sandinista National Liberation Front have benefited from the Central American country's steady economic growth and low levels of violence compared to neighboring Honduras and El Salvador. Many Nicaraguans also cite the first lady's social programs as a major reason for the governing party's popularity.
But critics accused Ortega and his allies of manipulating the political system to guarantee he stayed in power for a new five-year term by dominating all branches of government, allowing indefinite presidential re-election and delegitimizing the only opposition force seen as capable of challenging him. They said he wants to form a political dynasty together with his wife.
"I don't think it's worth voting and wasting time, because it's already fixed," said Glenda Bendana, an appliance sales executive in a Managua shopping mall. "Here they have taken away not our right to vote, but to choose. Ortega wants to die in power and leave his wife to take his place."
Eva Duarte Castillo, with a degree in marketing, was among those who went to the polls, though she didn't say how she voted. "I came to vote because it is not only my right as a citizen, it is also my duty. It is a responsibility and I exercised it. I'm happy," she said at a polling station in the capital's Altamira Managua neighborhood.
In July, Nicaragua's Supreme Electoral Council effectively decimated the opposition by ousting almost all its members from congress — 28 active and alternate legislators from the Liberal Independent Party and the allied Sandinista Renovation Movement — for refusing to recognize Pedro Reyes as their leader. Reyes was named head of the opposition by the Supreme Court but is seen by many as a tool of Ortega. The ousted legislators supported former opposition leader Eduardo Montealegre.
The most powerful opposition forces moved to the sidelines of the nation's politics, urging Nicaraguans to boycott the election, which they called a "farce."
Many Nicaraguans, including political analyst Carlos Tunnerman, believed the five other presidential candidates were not true opponents, but were placed on the ballot to make it seem that Ortega had legitimate competition.
"The only thing they are looking to do is play along with Ortega, permitting him to get additional small bits of power in the National Assembly, Tunnerman said.
Candidate Maximino Rodriguez of the Liberal Constitutional Party rejected that idea, saying, "I only collaborate with the Nicaraguan people."
Ortega, who helped topple the dictatorship of Anastasio Somoza as a Sandinista guerrilla leader, ruled Nicaragua in 1979-1990. After losing power in a shock electoral defeat, he later returned to the presidency through the ballot box in 2007.
Re-election would leave Ortega in power but facing an increasingly difficult regional landscape.
Leftist ally Venezuela is overwhelmed by an economic crisis and Cuba is normalizing relations with the U.S.
The U.S. House of Representatives has moved to punish Nicaragua since the opposition was gutted, passing a bill to require the United States to oppose loans to Nicaragua from international lending institutions unless the country takes "effective steps to hold free, fair and transparent elections." A companion bill was introduced in the U.S. Senate.
"The lack of Venezuelan support, the international price of oil, the price of our exports and the possibility that (U.S. legislation passes) makes it a more complicated outlook for the Ortega in the next term," said Oscar Rene Vargas, a sociologist and economist at Central American University.
Copyright 2016 The Associated Press. All rights reserved. This material may not be published, broadcast, rewritten or redistributed.