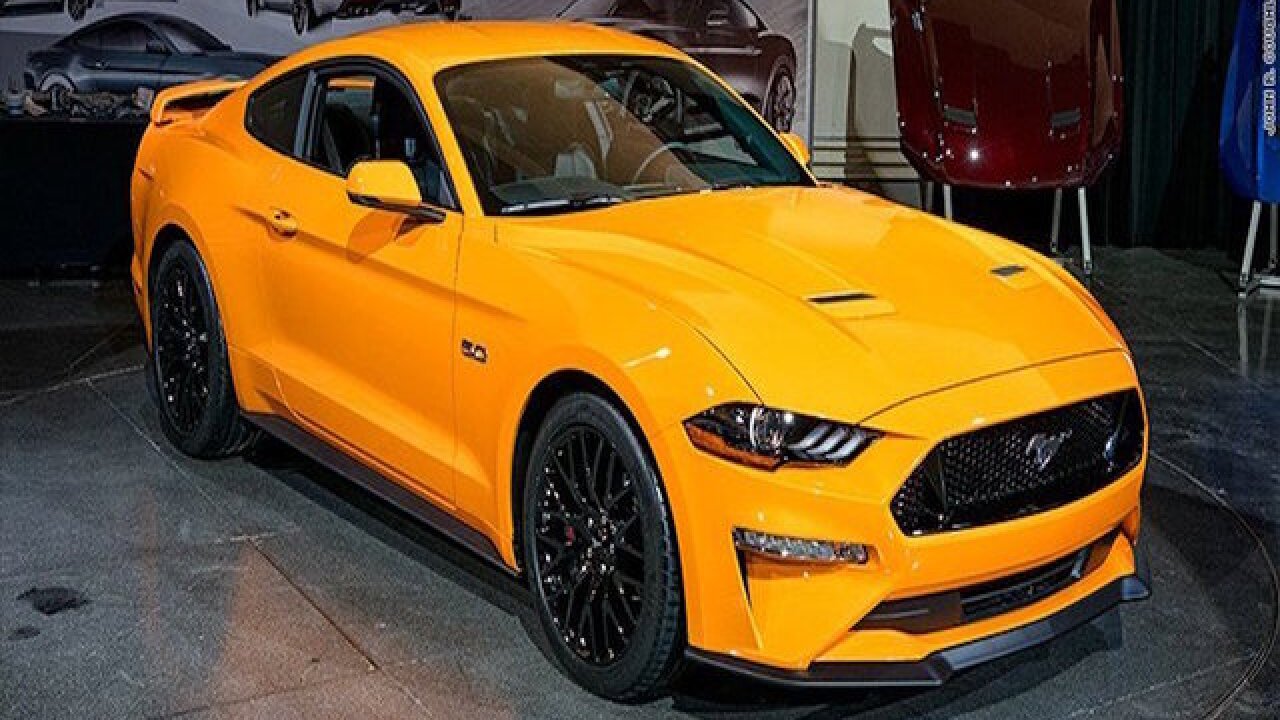 CNN
John R. Coughlin/CNNMONEY
<p>Ford just revealed updates for one of America's most famous cars. The 2018 Mustang is going to get a more powerful engine and a 10-speed transmission.</p>

DETROIT (CNNMoney) -- Ford just revealed updates for one of America's most famous cars. The 2018 Mustang is going to get a more powerful engine and a 10-speed transmission.

But the most noticeable change for the Mustang will be its new face. Designers sloped the car's nose down lower over the grill, a change that makes the front end appear longer. Also, new headlights are smaller and more intricately shaped. Overall, the reworked front end gives the Mustang more of a sleek "sports car" image and less of a blocky "muscle car" look.

On the back end, new taillight lenses have a more complex angled shape than the simple vertical blocks on the current model.

Inside, the new Mustang's gauge cluster will be all digital. Essentially, it will be a wide computer screen displaying customizable gauges that vary with each driving mode; Normal, Sport and Track.

The 10-speed transmission will, of course, be an automatic. (Drivers won't have to shift through all those gears as they merge onto the highway.) It's a transmission Ford developed in cooperation with General Motors. With increasing fuel economy demands, we can expect to see it used in more cars in the future.

The new transmission will be flexible enough to serve both needs, said Carl Wildmann, Ford's chief program engineer for the Mustang. For instance, the transmission won't always shift gears sequentially but will be able to quickly go from, say 10th gear right down to 6th gear if the driver punches the gas pedal for a burst of speed. With that many gears to choose from it should always be able to find the perfect one for any given driving situation, Wildmann said.

The base transmission will still be a six speed manual but that also has been improved, according to Ford.

The new Mustang will be available with either a 5.0-liter V8 or a 2.3-liter turbocharged four-cylinder engine. The V8 engine will produce more horsepower than the same-sized engine in today's Mustang, Wildmann said. He isn't saying, yet, just how much more power.

The four-cylinder will provide more torque -- a measure of raw pulling power -- than the one offered in today's Mustang. Its total horsepower output, a measure of power and speed combined, is expected to remain about the same at 310.

The 300 horsepower V6 engine offered as the low-priced option in today's Mustang will no longer be available. Given that, it seems likely that the starting price for the new Mustang will be a little higher -- the four-cylinder costs about $1,000 more than the V6 -- but Ford hasn't announced final pricing for the car yet. It's expected to go on sale some time this year.