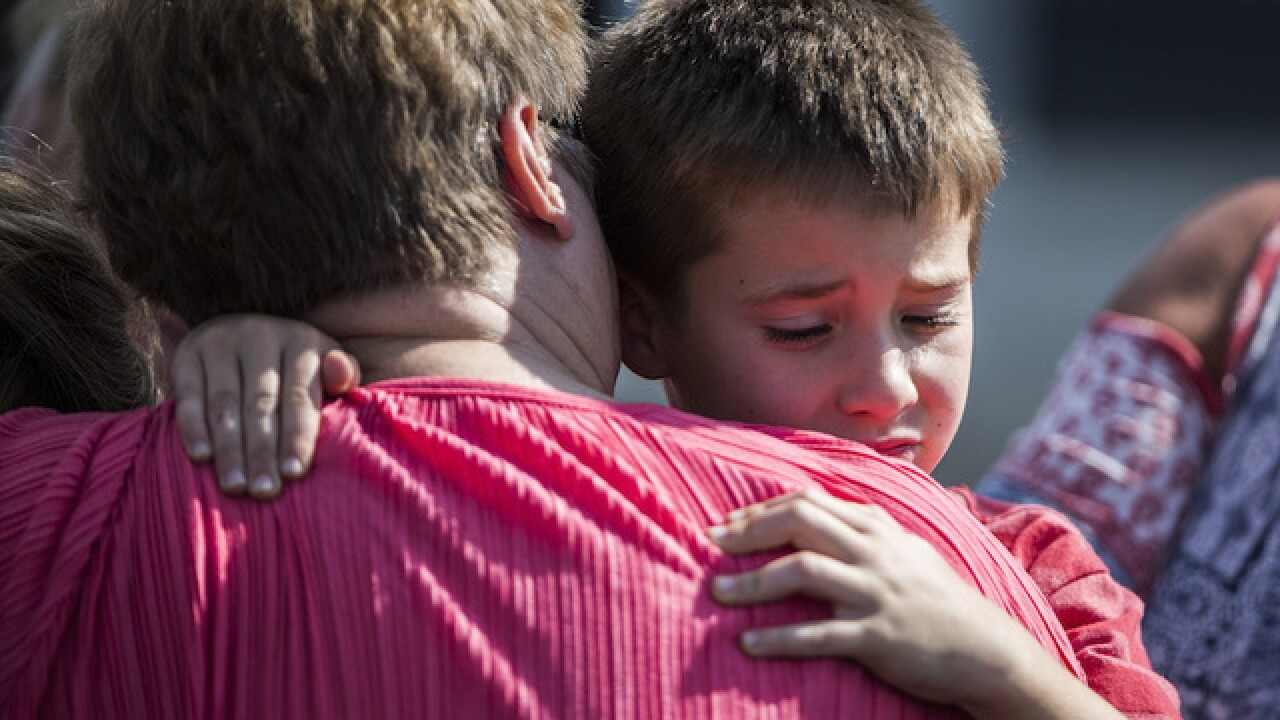 Katie McLean
<p>A woman hugs a boy following a shooting at Townville Elementary in Townville Wednesday, Sept. 28, 2016. A teenager killed his father at his home Wednesday before going to the nearby elementary school and opening fire with a handgun, wounding two students and a teacher, authorities said.</p>

TOWNVILLE, S.C. (AP) — The mother of a teen accused of killing his father and wounding two students and a teacher at a rural South Carolina elementary school says his family is "shocked and saddened."

In a statement that Pastor James South provided to local media outlets, Tiffney Osborne says the family "cannot express the devastation we feel at the loss of our beloved Jeff."

Authorities said the shooting began Wednesday afternoon at the teen's house about 2 miles from rural Townville Elementary School, where he gunned down his 47-year-old father, Jeffrey Osborne.

Authorities have not released the suspect's name or age beyond saying he's a teen. South says Tiffney Osborne found out about the shooting through media reports. Anderson County Sheriff John Skipper said earlier that she was at work at the time of the shooing.

Skipper said Jamie Brock, a 30-year veteran of the Townville Volunteer Fire Department, "just took him down" and stopped the teen before he could get inside the school. The sheriff said the fire station is close to the school, and Brock arrived before other officers responding to the dispatch.

Brock has said he doesn't want attention for his actions.

He "wants to remain humble and quiet about it" as he believes "he did nothing any of the other volunteer firefighters wouldn't have done," said Scott Stoller with Anderson County Emergency Management.

Regardless, he said, "Firefighter Brock is absolutely a hero."

The teacher wounded in the shooting, Meghan Hollingsworth, also was reluctant to talk.

"We are not interested in giving interviews or answering questions of any kind," a sign posted on the front door of her home Thursday morning read.

"We ask that you respect our privacy," the note said, while expressing appreciation for those concerned about her.

Sheriff's Lt. Sheila Cole said officers and forensic specialists were returning to the school Thursday morning to resume their investigation.

About one minute later, authorities received a 911 call from a teacher at the school in this rural town on the about 110 miles northeast of Atlanta near the Georgia-South Carolina border.

The shooter drove a truck into the school parking lot and immediately started firing as he got out and moved toward the school, Skipper said. He did not know who the truck the teen drove was registered to and declined to say how many shots were fired.

One student was shot in the leg and the other in the foot, sheriff's Capt. Garland Major said. Both students were male. The teacher was hit in the shoulder.

"We are heartbroken about this senseless act of violence," said Joanne Avery, school district superintendent. She canceled classes at the school for the rest of the week.

Television images showed officers swarming the school after the report of an active shooter. Some were on top of the roof while others were walking around the building. Students were driven away on buses accompanied by police officers to a nearby church.

Authorities said they don't yet know a motive for the shooting and they were not sure if the students and teacher were targeted. The sheriff said the teen had been homeschooled.

"There are no racial undertones there. There's no terrorism involved," Major said. "We're confident we have the sole shooter and no one else is involved."

One of the students and the teacher were released from the hospital Wednesday evening, AnMed Health spokeswoman Juana Slade said. Greenville Health System spokeswoman Sandy Dees said the other student, Jacob Hall, remained in critical condition.

The school surrounded by working farms has about 300 students in its pre-kindergarten to sixth-grade classrooms. About 90 percent of the students are white, according to state records.

"This is the country," Brandi Pierce, the mother of a sixth-grader, told The Associated Press as she began to cry. "You don't have this in the country."