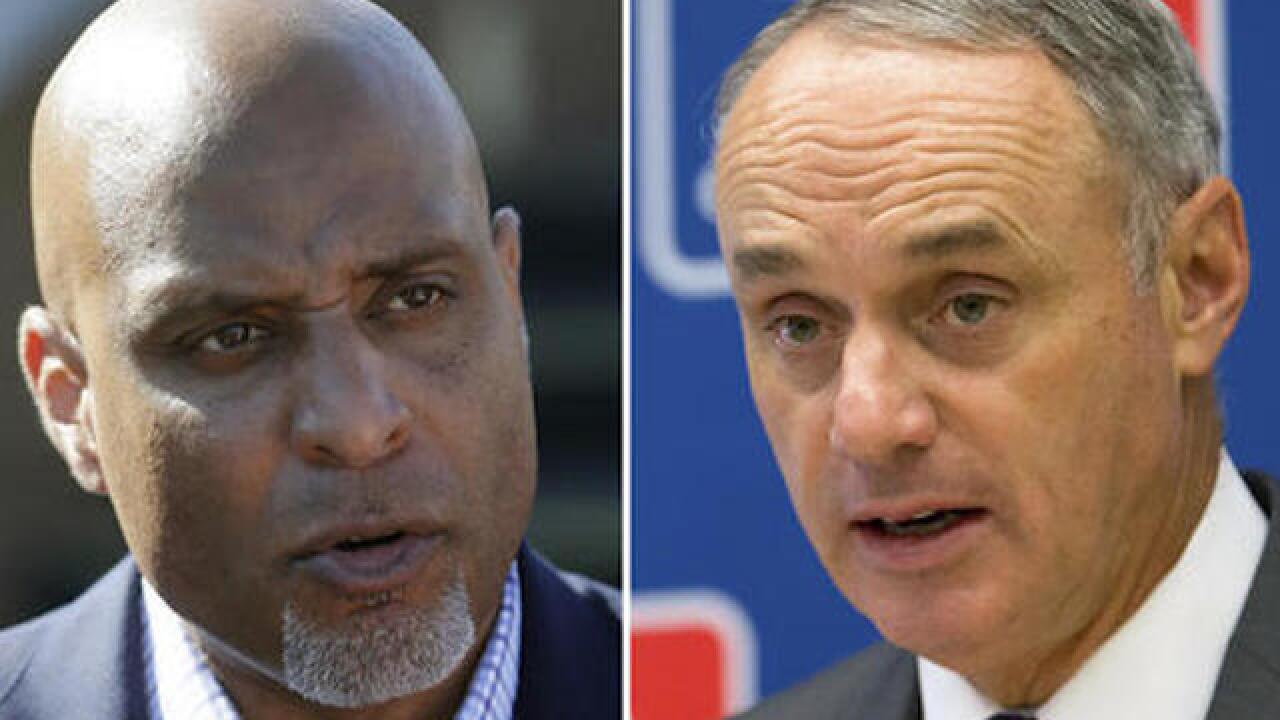 IRVING, Texas (AP) — Baseball players and owners reached a tentative agreement on a five-year labor contract Wednesday night, a deal that will extend the sport's industrial peace to 26 years since the ruinous fights in the first two decades of free agency.

After days of near round-the-clock talks, negotiators reached a verbal agreement about 3 1/2 hours before the expiration of the current pact. Then they worked to draft a memorandum of understanding, which must be ratified by both sides.

In announcing the agreement, Major League Baseball and the players' association said they will make specific terms available when drafting is complete.

"Happy it's done, and baseball is back on," Los Angeles Dodgers pitcher Brandon McCarthy said.

As part of the deal, the experiment of having the All-Star Game determine which league gets home-field advantage in the World Series will end after 14 years, a person familiar with the agreement told The Associated Press. The person spoke on condition of anonymity because the deal had not yet been signed.

Instead, the pennant winner with the better regular-season record will open the Series at home.

Another important change: The minimum time for a stint on the disabled list will be reduced from 15 days to 10.

Union head Tony Clark, presiding over a negotiation for the first time, said in a statement the deal "will benefit all involved in the game and leaves the game better for those who follow."

Key changes involve the qualifying offers clubs can make to their former players after they become free agents — the figure was $17.2 million this year. If a player turns down the offer and signs elsewhere, his new team forfeits an amateur draft pick, which usually had been in the first round under the old deal.

Under the new rules, a player can receive a qualifying offer only once in his career and will have 10 days to consider it instead of seven. A club signing a player who declined a qualifying offer would lose its third-highest amateur draft pick if it is a revenue-sharing receiver, its second- and fifth-highest picks (plus a loss of $1 million in its international draft pool) if it pays luxury tax for the just-ended season, and its second-highest pick (plus $500,000 in the international draft pool) if it is any other team.

A club losing a free agent who passed up a qualifying offer would receive an extra selection after the first round of the next draft if the player signed a contract for $50 million or more and after competitive balance round B if under $50 million. However, if that team pays luxury tax, the extra draft pick would drop to after the fourth round.

—For a team $40 million or more in excess of the luxury tax threshold, its highest selection in the next amateur draft will drop 10 places.

—While management failed to obtain an international draft of amateurs residing outside the U.S., Puerto Rico and Canada, it did get a hard cap on each team's annual bonus pool for those players starting at $4.75 million for the signing period that begins next July 2.

—There is no change to limits on active rosters, which remain at 25 for most of the season and 40 from Sept. 1 on.

—Smokeless tobacco will be banned for all new players, those who currently do not have at least one day of major league service.

—The regular season will expand from 183 days to 187 starting in 2018, creating four more scheduled off days. There are additional limitations on the start times of night games on getaway days.

—The drop-off in slot values in the first round of the amateur draft will be lessened.

—As part of the drug agreement, there will be increased testing, players will not be credited with major league service time during suspensions, and biomarker testing for HGH will begin next year.

Negotiators met through most of Tuesday night in an effort to increase momentum in the talks, which began during spring training. This is the third straight time the sides reached a new agreement before the old contract expired, but a deal was struck eight weeks in advance in 2006 and three weeks ahead of expiration in 2011.

Talks took place at a hotel outside Dallas where the players' association held its annual executive board meeting.

Clark, the first former player to serve as executive director of the union, and others set up in a meeting room within earshot of a children's choir practicing Christmas carols. A man dressed as Santa Claus waited nearby.

Baseball had eight work stoppages from 1972-95, the last a 7 1/2-month strike in 1994-95 that led to the first cancellation of the World Series in 90 years. The 2002 agreement was reached after players authorized a strike and about 3 1/2 hours before the first game that would have been impacted by a walkout.