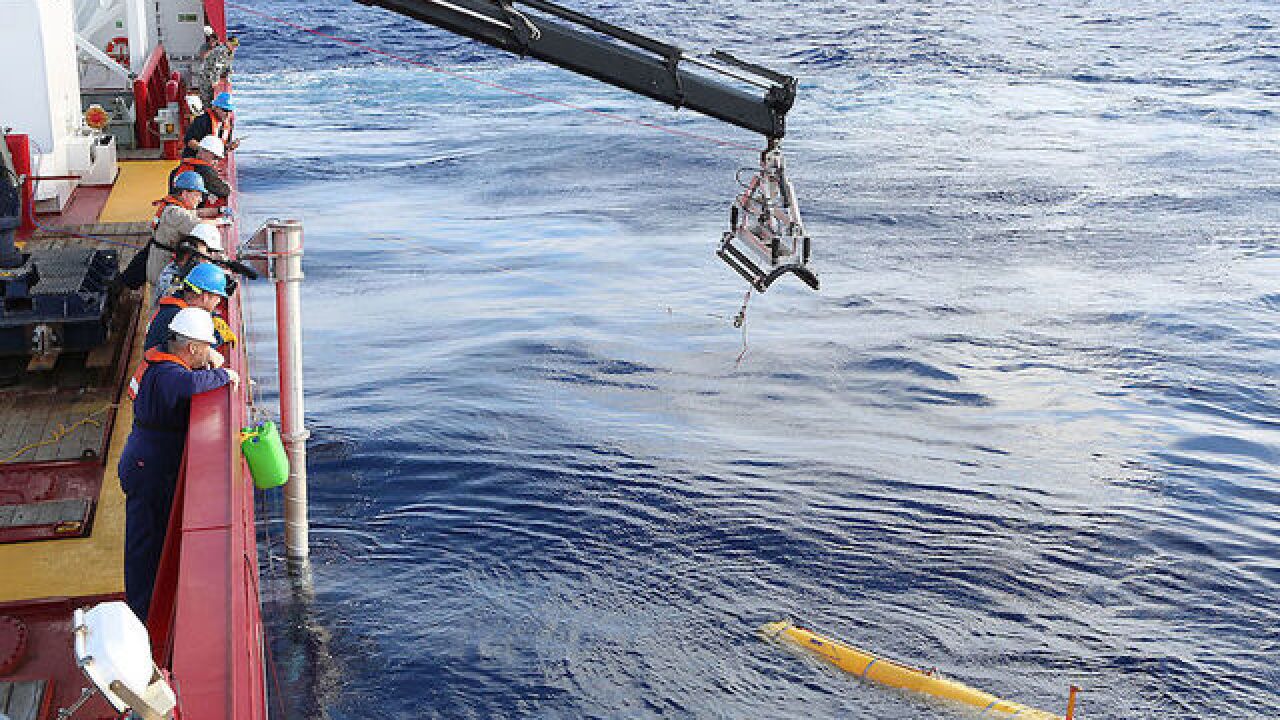 Copyright Getty Images
Handout
<p>AT SEA - APRIL 14: In this handout image provided by Commonwealth of Australia, Department of Defence, Phoenix Autonomous Underwater Vehicle (AUV) Bluefin-21 is craned over the side of Australian Defence Vessel Ocean Shield in the search for missing Malaysia Airlines flight MH 370 on April 14, 2014. Twenty-six nations have been involved in the search for Malaysia Airlines Flight MH370 since it disappeared more than a month ago. (Photo by LEUT Kelli Lunt/Australia Department of Defence via Getty Images)</p>

HONG KONG (CNN) -- The underwater search for Malaysia Airlines Flight 370 has been suspended nearly three years after the plane vanished without a trace over the Indian Ocean, according to a joint statement from Chinese, Australian and Malaysian officials.

The three countries had been leading the search for MH370, which disappeared en route from Kuala Lumpur to Beijing on March 8, 2014, with 239 people on board.

"Despite every effort using the best science available, cutting edge technology, as well as modeling and advice from highly skilled professionals who are the best in their field, unfortunately, the search has not been able to locate the aircraft," the statement said.

"The decision to suspend the underwater search has not been taken lightly nor without sadness."

Voice370, a support group for family members of those aboard the flight, released a statement expressing their disappointment.

"Commercial planes cannot just be allowed to disappear without a trace," the statement said.

"Stopping at this stage is nothing short of irresponsible, and betrays a shocking lack of faith in the data, tools and recommendations of an array of official experts assembled by the authorities themselves."

Steve Wang, whose mother was on board the flight, told CNN he was disappointed the search had ended with few, if any, answers.

"I think it is their responsibility, not only for the 239 passengers on the plane, or for the next of kin like us, but also they have to give an answer to the whole world ... what really happened to MH370."

Multiple family members of those who were on the plane told CNN they received a text message from Malaysia Airlines informing them about a briefing in Beijing at 9 a.m. local time.

In a statement, the airline said it "stands guided" by the decision to suspend the search, which it described as a "thorough and comprehensive effort."

The company shares "in the sorrow" that the search was not successful, the statement said.

The plane's disappearance remains one of the greatest aviation mysteries in modern history.

Searchers spent millions of dollars scouring tens of thousands of square miles, but so far have yielded little new information about the plane's final moments.

In July last year, Australia, China and Malaysia agreed that if the aircraft was not located by the time 120,000 square kilometers (46,000 square miles) had been covered, the search would be suspended.

"The decision came not lightly," Darren Chester, Australia's Transport Minister, said at the time. "But in the absence of new credible evidence it is not possible to continue searching. Every effort has been made. We have used the most high tech and the best people for this search."

The Tuesday statement said that vessel was not located in the 120,000 square kilometer search area.

What we do know

At 12:41 a.m. local time on March 8, 2014, MH370 departed Kuala Lumpur International Airport for Beijing. It was heading north but after its last message of "Good night Malaysian Three Seven Zero," it changed course toward the west, according to military radar.

From there, investigators believe it turned south around the edge of Indonesia and across the vast Indian Ocean.

Investigators confirmed in July that MH370 captain Zaharie Ahmad Shah had tracked a route deep into the Indian Ocean on his home flight simulator, very similar to the one officials believe the missing plane took.

Grandparents, a newly graduated engineer, a young couple and a two-year-old boy were among the hundreds of people on board MH370 when it vanished.

Most of the passengers and crew were from China and Malaysia, but individuals and families from 14 different countries were also on board the missing flight.

Based on some of the wreckage that's been found, the Australian Transport Safety Bureau determined the wing flaps had been stowed when MH370 crashed.

The report suggested the plane had been out of control, spiraling downward at a rate of almost 300 miles per hour at its last satellite transmission.

These findings suggested "two early hypotheses," according to CNN aviation analyst Mary Schiavo; either that a fire on board the plane incapacitated everyone through smoke or fumes, or that a rapid decompression, perhaps because of a breach in a window, led to their deaths hours before the plane ran out of fuel and spiraled downward.

But investigators still haven't been able to say for sure what caused the crash, and, unfortunately, according to O'Neill and Associates aviation expert Peter Goelz, the debris discovered has so far done little to enlighten us -- or the victims' families -- as to what exactly happened that day.

"All it tells us is what we suspected, in that the plane crashed somewhere in the South Indian Ocean," he told CNN in November. "At some time in the future there will be a quantum leap forward in the ability to look underneath the sea and someone will find it. But that's not for decades," Goelz said. "I think at some point, they'll find it -- it's too big a mystery. But the technology we have now, we can't do it easily or cheaply."

There's also the possibility that the search teams were looking in the wrong place, according to an Australian government released in December.

The report recommended that, based on new analysis, a new area to the northeast of the current search area should be searched, approximately 25,000 square kilometers.

However, Australian Transport Minister Chester said the search would not be extended without new evidence.

Multiple countries and companies have been involved in the extensive search, which has taken place along a defined arc in the Southern Indian Ocean, where the plane made its last satellite transmission.

Three pieces of the missing plane found off the coast of Africa have been confirmed as coming from MH370, using specific identification numbers.

The first piece found was a flaperon from the plane's wing, which was discovered on Reunion Island in July 2015, after which came two wing flaps discovered in Mauritius and Tanzania in May and June 2016, respectively.

The ATSB said six other pieces of wreckage found off the African coast were likely to have come from the missing plane, but this wasn't confirmed.

In total, 20 pieces of debris have been brought to the attention of the investigative team.

But those pieces of detritus have not given closure to those whose loved ones remain missing.

"The people who are living with you more than 20 years, and they leave suddenly," Wang said. "We just want them to give us more information. I think there are still something, we don't know."