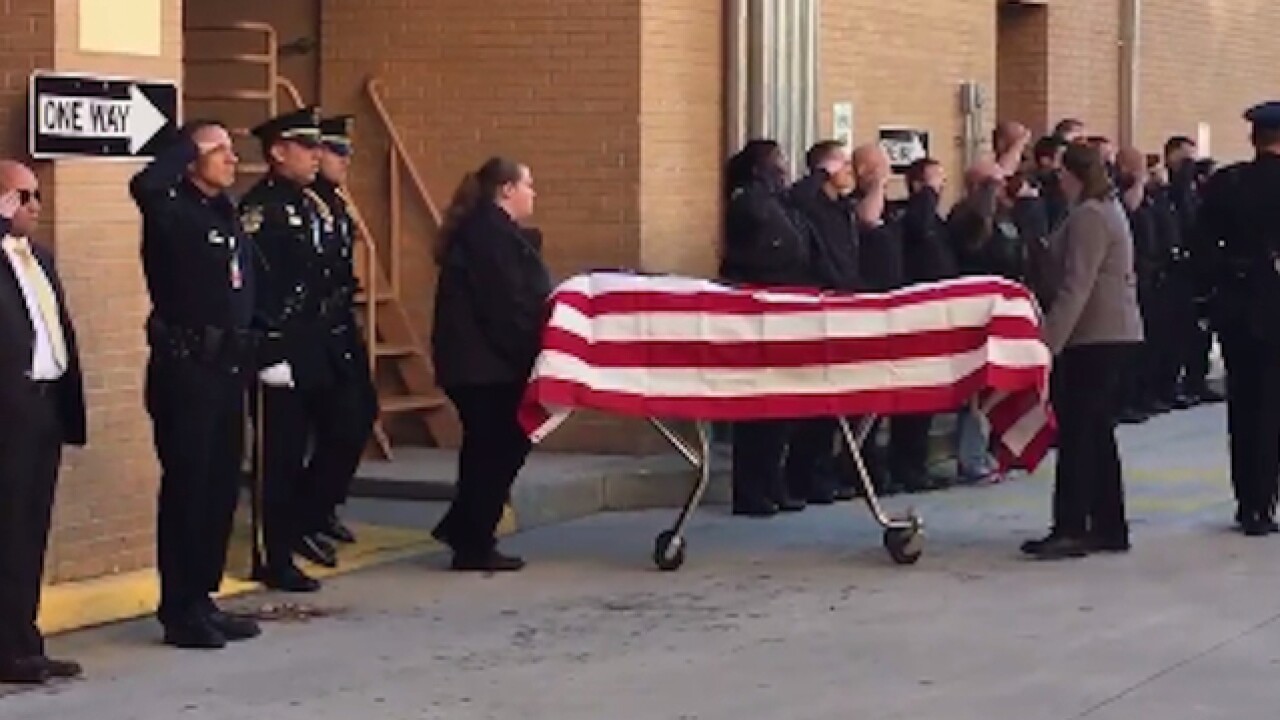 An Orlando police officer searching for a murder suspect was gunned down Monday, and a sheriff's deputy looking for her killer also died, authorities said.

The Orlando Police Department announced a reward of up to $60,000 for anyone who can lead officers to the suspect, identified as Markeith Loyd by Orlando Police Chief John Mina.

If you know the location of Markeith Loyd reward is up to $60,000. Please call @CrimelineFL pic.twitter.com/hHrf8bMDWt

Loyd is also suspected in the killing of Sade Dixon, who was pregnant at the time of her death, according to the Orlando Police Department.

'One of our own was taken'

"The Orlando Police Department family is heartbroken today," OPD tweeted, along with video of a flag-draped casket. "One of our own was taken in the line of duty. There are no words."

The chief said Clayton was trying to contact a murder suspect at a Walmart at 7:17 a.m. Two minutes later, police received a call of an officer shot.

"He walked by me, had a security vest and everything," Herman said.

"I was walking down the sidewalk, right past the officer, and I heard her tell him to stop, or whatever, and he shot her. He shot her down."

Herman said the man continued to shoot behind him as he was running from the scene.

Authorities across Orange County scrambled to find Loyd. During the manhunt, a sheriff's deputy was killed in a crash, Demings said.

"Not only did we lose an Orlando police officer today, we lost an Orange County deputy sheriff as well who was traveling on his motorcycle," the sheriff said.

"A motorist turned in front of him. Based on eyewitness testimony, he had a green light, he was not traveling at any (high) rate of speed."

The deputy's name has not been released pending notification of relatives.

Demings said several law enforcement officers have been injured searching for Loyd. Authorities warn that the murder suspect is armed and dangerous.

At one point during the manhunt, an Orange County sheriff's captain saw a vehicle that appeared to be the suspect's and made a U-turn, Demings said.

The suspect fired at the captain. The captain was not seriously injured, but authorities are now pursuing an attempted murder charge against the suspect.

At least 17 nearby schools are on lockdown as the suspect remains at large, officials said.

While the search continues, Mina said his department is mourning the death of a "hero."

"Debra Clayton is a hero, and she gave her life protecting the community that she loved."

Clayton's death marks the first firearm-related fatality of a law enforcement officer in the US in 2017, said Steve Groeninger of the National Law Enforcement Officers Memorial Fund.

The deaths of Clayton and the unidentified Orange County sheriff's deputy mark the second and third on-duty law enforcement officer deaths of 2017.