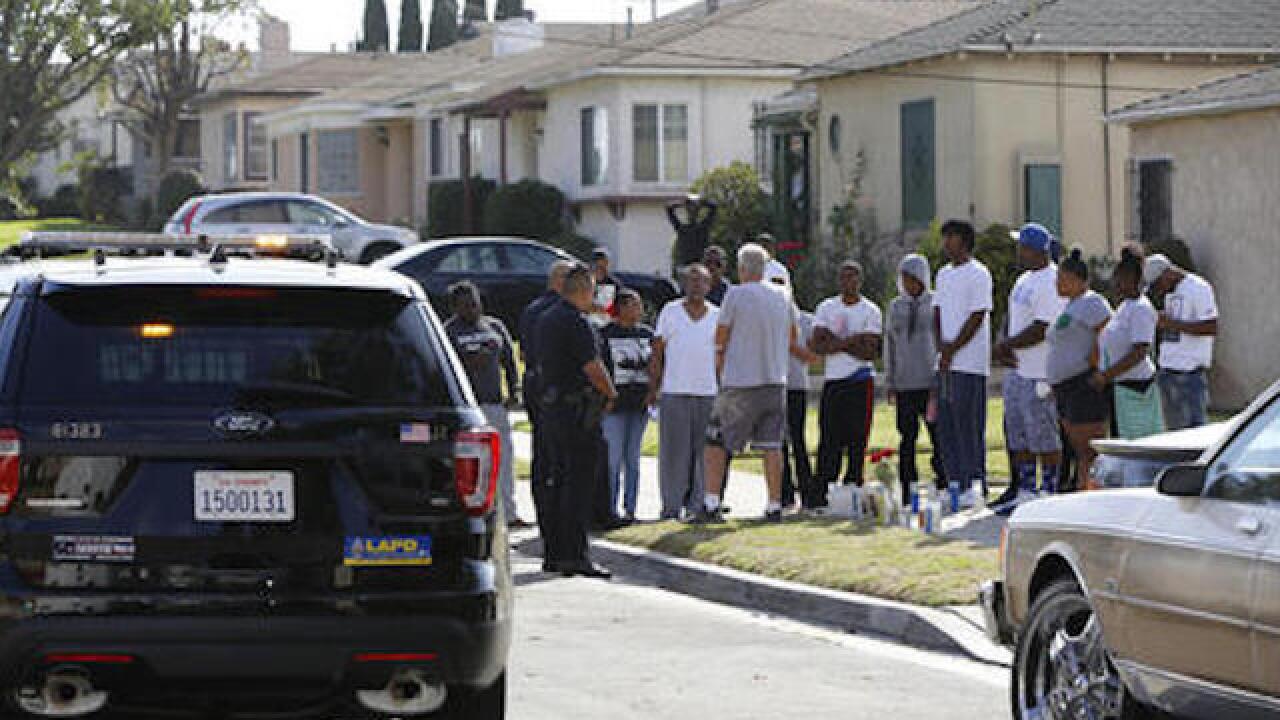 Damian Dovarganes
<p>Los Angeles Police officers stop their patrol vehicle to speak to neighbors and members of the community gathered around a memorial spell out "L.L.C.J." for Long Live C. J., outside a residence on Sunday, Oct. 2, 2016. LAPD Officers shot and killed Carnell Snell Jr. in south Los Angeles on Saturday at the end of a car chase, sparking a protest by several dozen people angered by another fatal police shooting of a black man. (AP Photo/Damian Dovarganes)</p>

The chief disclosed details of Saturday's shooting of Carnell Snell, 18, in South Los Angeles and a separate fatal police shooting of a Hispanic man Sunday amid heightened tensions over police shootings involving blacks and other minorities in California and elsewhere.

Snell was in the back seat of a car that officers noticed because its paper plates did not match the year of the car, Beck said.

Snell ducked from sight and then jumped out of the car while holding his waistband as if supporting something, the chief said.

After a chase of several hundred yards, Snell pulled a handgun with his left hand and turned toward the officers, who fired six rounds. Beck said Snell was hit twice, once in the torso and once in a knee. He died at the scene.

Snell's gun was fully loaded with one round in the chamber but was not fired, Beck said.

The officers were not wearing body cameras but a surveillance video from a business clearly showed Snell was armed, Beck said.

A group of people protested outside Beck's news conference, chanting, "No justice, no peace, no racist police." Three people were arrested for unlawful assembly.

During the weekend, the shooting led to small but rowdy protests in South Los Angeles, resulting in several arrests.

Activists have called on police to publicly name the officers involved in the shooting, which occurred near Snell's home. They also appealed for a quick and transparent investigation.

In that incident, a man was shot when he pointed what turned out to be a replica handgun with an orange tip that had been colored black, Beck said.

The man remained unidentified. He was only described as Hispanic.

Beck said both officers involved in Sunday's shooting were wearing body cameras and the footage supports their accounts while refuting claims that the man was shot on the ground.

The officers were responding to reports of a man with a gun.

Snell was the third black man in five days to die in confrontations with police in Southern California.

Last Tuesday, Alfred Olango was fatally shot by an officer in the San Diego suburb of El Cajon, triggering three days of angry and sometimes violent protests. Olango was shot when he took a "shooting stance" and pointed at an officer with what turned out to be a 4-inch vape pen — an electronic cigarette device.

On Friday, Reginald Thomas died after being shot with a Taser by police in Pasadena. He was armed with a knife and his wife described him as mentally ill. His brother told a 911 dispatcher that Thomas was high and had a history of violence.

Meanwhile, the family of a black man killed by police in Sacramento in July demanded murder charges Monday against two officers heard on a dash-cam video talking about trying to hit the man with their police cruiser before shooting him 14 times.

The officers "behaved like big game hunters closing in on an animal," said John Burris, a lawyer for the family of 50-year-old Joseph Mann.

In Snell's South Los Angeles neighborhood of small stucco houses and well-kept lawns there was a makeshift shrine of flowers and candles in front of the property where he died.

Christine Conley, a next-door neighbor of Snell's for 10 years, described the teenager she knew as "CJ" as cheerful and polite, someone who liked to dress nicely and didn't sport gang clothing or tattoos.

She knew he had been in jail but didn't know why. A Los Angeles County Sheriff's Department website indicated that Snell was arrested in January and released from jail on probation in June. It did not describe the nature of the offense.

"''He's never given me any problems. He's always been respectful and kind," Conley said. "He was always happy."

She said there is outrage in the black community "because of the way police handle our people."

"If he was any other race than black, he may have had another chance," she said.