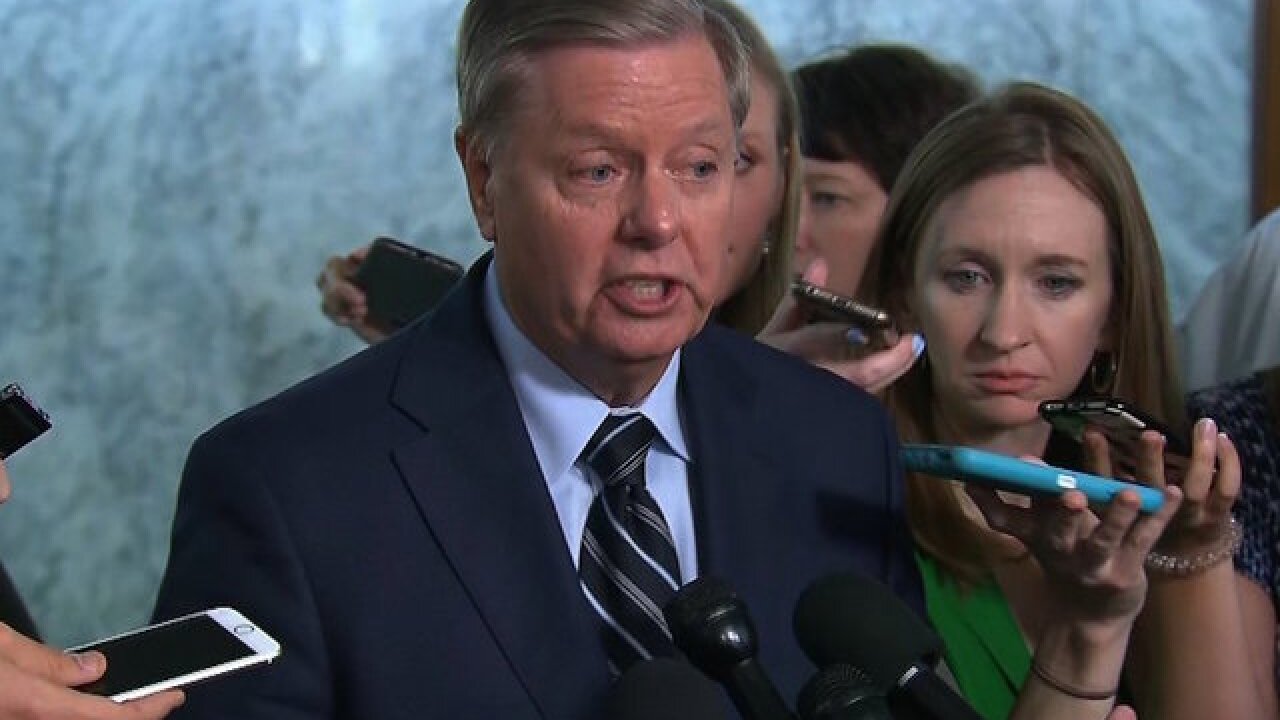 Immediately following an aggressive line of questioning by Illinois Democratic Sen. Dick Durbin, Graham said angrily, "What you want to do is destroy this guy's life, hold this seat open, and hope you win in 2020."

The Republican from South Carolina then turned his attention back to Kavanaugh and asked: "Are you a gang rapist?" Kavanaugh replied: "No."

Graham expressed sympathy for the Supreme Court nominee and his family, saying, "I cannot imagine what you and your family have gone through." He added, "I hope the American people can see through this sham."

During Thursday's hearing, senators have had the option to hand off their questioning to Rachel Mitchell, a career prosecutor with decades of experience prosecuting sex crimes. GOP senators opted to defer to Mitchell during questioning of Christine Blasey Ford, while Democrats asked their own questions. Graham appeared eager to speak himself, however, when it came time to question Kavanaugh, and several Republicans followed his lead.

Graham had a message for Republicans on the panel as well, saying, "To my Republican colleagues, if you vote 'no', you're legitimizing the most despicable thing that I have seen in my time in politics." He told Kavanaugh that he hopes the nominee ends up on the Supreme Court, saying, "that's exactly where you should be."

".@LindseyGrahamSC has more decency and courage than every Democrat member of the committee combined. God bless him," Sanders tweeted.

Earlier in the day, Graham compared the judge's treatment to Ford's experience, the woman who came forward to accuse him of sexual assault.

"I'm not going to reward people for playing a political game, I think, with her life," Graham said. "She is just as much a victim of this as I think Brett Kavanaugh (is). Because somebody betrayed her trust, and we know who she gave the letter to."

Graham made those comments to reporters on Capitol Hill following Ford's testimony before the Senate Judiciary Committee and ahead of Kavanaugh's scheduled reappearance before the panel. Kavanaugh testified later on Thursday afternoon.

Graham expressed deep seated anger with his Democratic counterparts for their handling of the accusations from Ford and for California Democratic Sen. Dianne Feinstein's decision not to inform others about the allegations after Ford reached out to her confidentially earlier this year.

He accused Democrats further of trying to use the allegations against Kavanaugh to delay the confirmation process and ultimately prevent President Donald Trump from getting Kavanaugh on the court.

"All I can say is that we're 40-something days away from the election." Graham said. "And their goal, not Ms. Ford's goal, is to delay this past the midterms so they can win the Senate and never allow Trump to fill the seat."

Graham called Ford a "nice lady," but said her story was uncorroborated and pointed to Kavanaugh's denial of her allegations. He suggested a rejection of Kavanaugh's nomination based on these allegations would set a bad precedent as well.

"God help anybody else that gets nominated," Graham said.

He also took issue with the notion of waiting for an FBI investigation into the allegations against Kavanaugh.