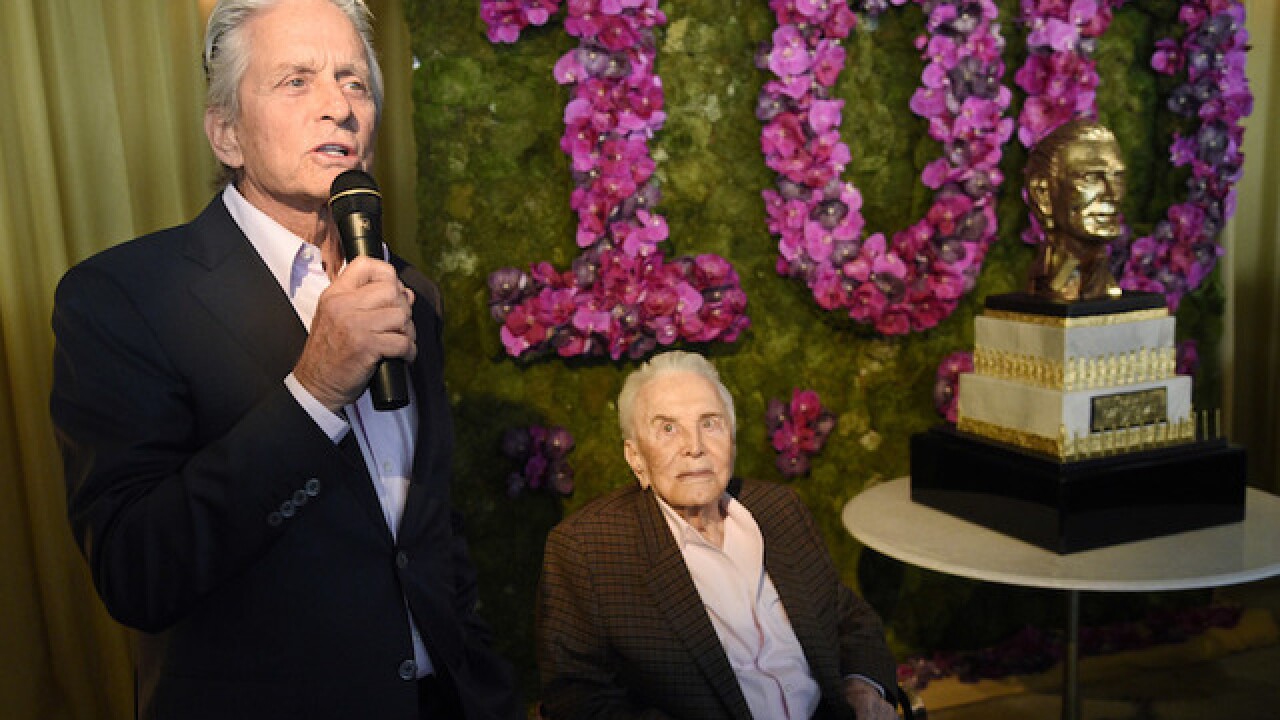 BEVERLY HILLS, Calif. (AP) — Kirk Douglas knows how to make an entrance. With boxing gloves in every centerpiece and the theme from "Rocky" blaring over the speakers, Douglas, one of the golden age of Hollywood's last living legends, walked confidently into the Sunset Room at the Beverly Hills Hotel Friday afternoon to celebrate his 100th birthday at an intimate gathering of friends and family.

Flanked by Anne Douglas, his wife of over 62 years, his son Michael Douglas, his daughter-in-law Catherine Zeta-Jones and his grandchildren, Kirk Douglas looked out over the crowd of about 150 people, including Don Rickles, Jeffrey Katzenberg, his Rabbi and many of his closest friends and smiled. Not only was he surrounded by friendly faces, he knew, as promised by his doctor years ago, that if he lived to 100, he would get to have a glass of vodka.

But before the vodka was presented in a comically large martini glass, Kirk Douglas got to sit and listen to words from his loved ones as images from his many classic film credits such as "Spartacus," ''Lust for Life," ''Paths of Glory" and others played on a screen behind him.

Michael Douglas kicked off the proceedings, saying that it's not just about age, but about the life he's lived and what he's accomplished.

"One of the things that I find most incredible about dad is the third act of his life," said Michael Douglas. "After all he accomplished in his professional career and what he's given for his country, at the point in his life where he's faced adversity, losing a son, having a helicopter crash, having a stroke, and what he's accomplished in this third act in his life, I find quite extraordinary."

"I wonder who he was talking about? He said some nice things about someone I don't know," Kirk Douglas said, joking that Michael Douglas was chosen to organize the proceedings because "he has the most money."

Kirk Douglas also thanked everyone for coming and marveled at seeing most of his family in the crowd.

Zeta-Jones then lit the 12 candles on the cake.

"I'm so glad there's not 100!" she exclaimed, before leading the room to sing "Happy Birthday" with a string quartet accompaniment.

It was only the start of the afternoon, which included remarks from a few of his seven grandchildren, his Rabbi and his doctor. Charley King's Bluebell Events oversaw the afternoon tea where each table was designated not by numbers but by Kirk Douglas's films. The birthday boy was seated at the "Lonely Are the Brave" table, which is his favorite film.

Don Rickles lightened the reverent and respectful mood, quipping to the crowd from his seat that he wanted to go home.

He poked fun at Kirk Douglas's good looks and physique saying that he had to hear the "I'm Spartacus crap" every day, and how Burt Lancaster used to advise him that Kirk Douglas "doesn't know what he's talking about."

Rickles did get a bit choked up by the end.

"You are an outstanding man because you've been blessed with warmth and love and class, and ... ah, forget it, you're all of that and more," He said. "May god give you strength and may you be with us for 100 more. If that's his wish, so be it, if not, I know in heaven you'll be in charge."

Off to the side, actress and dancer Neile Adams, who was Steve McQueen's first wife, recalled Douglas's mischievous side.

"Kirk was terrible when he was a young man! You could not sit beside him without his hand crawling up your leg. When Steve would leave the room suddenly he'd be on me," she said with a hearty laugh. "But he was cute."

She recalled his resilience, when a few years ago he had both of his knees replaced. Michael Douglas, she said, tried to encourage him to just do one and get a chair. Kirk Douglas, however, had a different idea and it didn't involve a wheelchair.

Later in the afternoon, Katzenberg reflected on the generosity of the Douglas's, who are famous for their charitable giving.

"You have remained and will always remain my hero," Katzenberg said. "I will remind you of your words that you gave to me and I try to give to other people all the time which is 'you haven't learned how to live until you learn how to give.'"

Steven Spielberg, who arrived late, and on crutches having recently broken his foot on set came with a very specific message.

"I wanted to come here and say I've been shooting movies and television shows for now 47 years and I've worked with the best of them and you're the only movie star I ever met," Spielberg said. "There is something that you have that no one else ever had ... When you watch Kirk's performance in anything, in anything he's ever done, you cannot take your eyes off of him. It's not possible to look away from him."

He called it an optimistic ferocity and it's something he challenges all his actors to achieve in his films.

And, even after 100 years to show for it, he's still fighting.