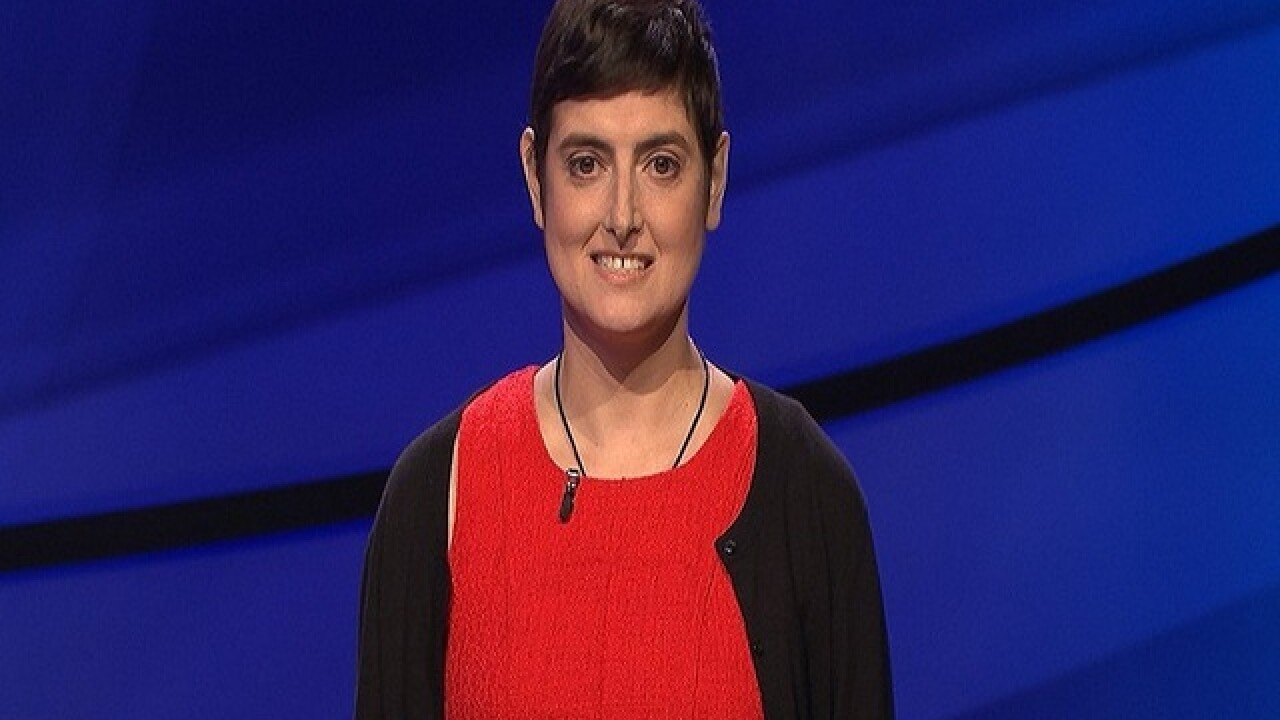 From Jeopardy
<p>Cindy Stowell, a "Jeopardy!" contestant who achieved her dream of appearing on the show has passed away just a week before the episode is due to air, her partner said. The episode featuring Stowell is scheduled to air on Tuesday, December 13.</p>

By: CNN
Posted at 9:24 PM, Dec 19, 2016
(CNN) -- A "Jeopardy!" contestant who died before her string of taped appearances aired on the TV game show this week won her fifth consecutive game in an episode broadcast Monday night.
The win took Cindy Stowell's total to $80,002 in prize money.
A science content developer from Austin, Texas, Stowell died December 5 after a long battle with cancer, according to her longtime partner, Jason Hess.
"Cindy came on 'Jeopardy!' to play the game she loved and in doing so she was able to make a contribution to cancer research in the hopes that no one else would have to go through what she did," her brother Greg, mother Carole, and Hess said in a statement.
Stowell, 41, first appeared on an episode that aired Tuesday and was the winning contestant, with $22,801. She won again on the show that aired Wednesday and took home $8,199.
A passion for the show
Stowell passed the initial online contestant test for the show early this year and moved on to the in-person audition phase in Oklahoma City.
It was prior to her audition that she divulged her illness to a "Jeopardy!" staffer, and spoke passionately about why she wanted to compete on the show.
"Do you have any idea how long it typically takes between an in-person interview and the taping date?" Stowell asked in a message to "Jeopardy!" contestant producer Maggie Speak.
"I ask because I just found out that I don't have too much longer to live. The doctor's best guess is about six months."
Stowell wanted winnings to go to cancer charities
"If there is the chance that I'd be able to still tape episodes of 'Jeopardy!' if I were selected, I'd like to do that and donate any winnings to ... charities involved in cancer research," Stowell wrote.
Stowell had been concerned that even if she passed the in-person test, the show would not be able to schedule her in the short amount of time she had left.
"If it is unlikely that the turnaround time would be that quick, then I'd like to give up my try out spot to someone else," Stowell wrote in her message to Speak.
Show staff told Stowell to attend her Oklahoma City audition as scheduled. They said that, if she was selected to compete, they would book her appearance as soon as possible. She was selected and show producers kept their word, scheduling the taping of her appearance three weeks after the audition, on August 31.
When Stowell got to the "Jeopardy!" studios, she was fighting Stage 4 cancer, and only a handful of staffers, including longtime host Alex Trebek, knew she was sick.
Opponents unaware of illness
"When Cindy Stowell taped her appearance on "Jeopardy!" she had Stage 4 cancer," Trebek said in a statement to CNN.
"Competing on "Jeopardy!" was a lifelong dream for Cindy, and we're glad she was able to do so."
Stowell's opponents were unaware she was ill, according to a statement from the show.
"Jeopardy!" spokeswoman Alison Shapiro told CNN she is unaware of any other contestant dying prior to an episode airing for the first time.
CNN's Joe Sterling contributed to this report
The-CNN-Wire
™ & © 2016 Cable News Network, Inc., a Time Warner Company. All rights reserved.
WKBW