Jared Kushner to be named senior adviser to the president 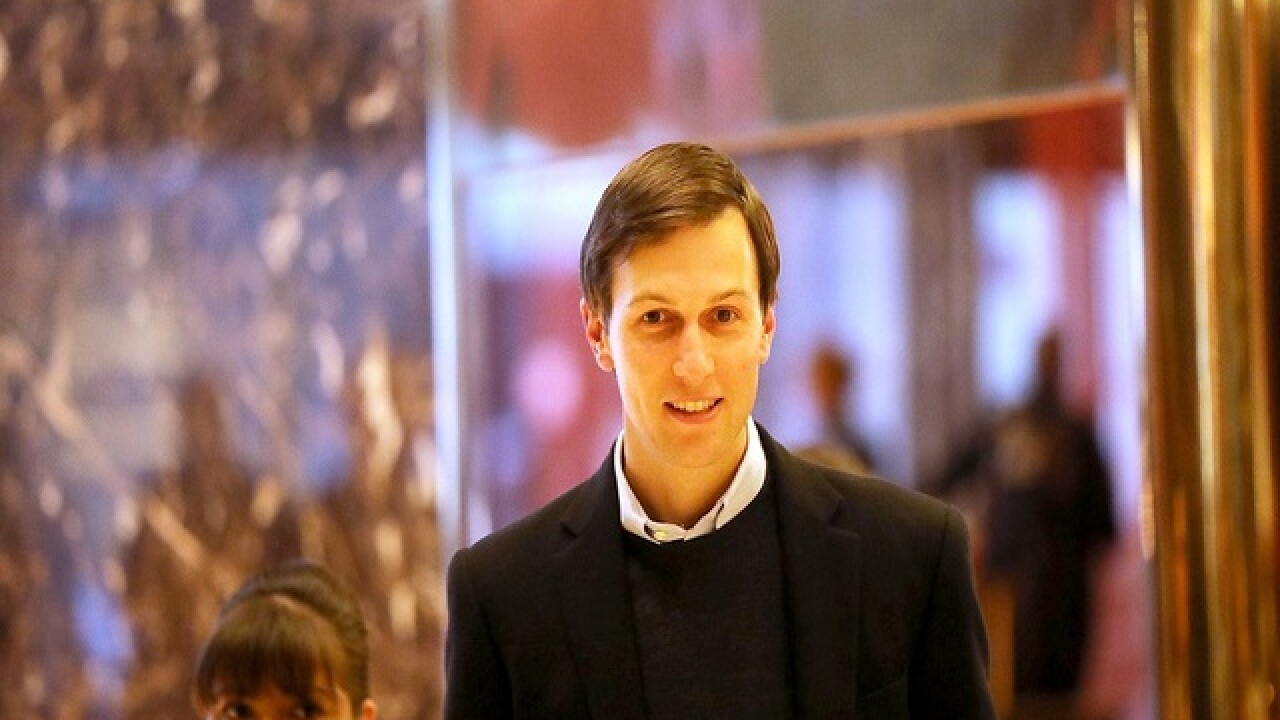 Copyright 2017 Scripps Media, Inc. All rights reserved. This material may not be published, broadcast, rewritten, or redistributed.
Spencer Platt

By: CNN
Posted at 8:56 PM, Jan 09, 2017
(CNN) -- Donald Trump's son-in-law, Jared Kushner, will be senior adviser to the president, a senior transition official told CNN Monday.
The 35-year-old businessman-turned-political strategist played a key part in his father-in-law's presidential campaign and his new position is expected to test the limit of federal anti-nepotism rules. The move comes ahead of a Wednesday news conference in which Trump is expected to detail how he plans to manage his company's potential conflicts-of-interest after he enters the White House.
Kushner plans to resign from the management positions he holds at his companies, including as CEO of Kushner Companies, publisher of The Observer and positions with other organizations, and will divest from a "significant number" of his assets to comply with government ethics rules, Kushner's attorney Jamie Gorelick told CNN on Monday.
Kushner also will not take a salary as he steps into the West Wing job, an official who briefed on behalf of the transition told reporters later on Monday.
Top Democrats on the House Judiciary Committee issued a statement within hours of Kushner's appointment calling on the Justice Department and the Office of Government Ethics to review the appointment's legality in light of the anti-nepotism statute.
"There is a strong case to be made that the White House is an "agency" for purposes of the anti-nepotism statute and that it would apply to bar Mr. Kushner's appointment as a White House staff member," wrote Rep. John Conyers, the House Judiciary Committee's ranking member, and other top Democrats on the committee, in a statement released Monday evening.
Gorelick argued that the anti-nepotism statue which applies to presidential administrations excludes the White House office where Kushner would be based, though the statute is open to different interpretations. Kushner is related to the President-elect by marriage, but a 1967 law specifies "son-in-law" as a type of relative covered by the regulations.
"We have the better argument," Gorelick told CNN. "We are very confident in this position."
Gorelick added that she and transition officials have been in "pretty constant" communication with the Office of Government Ethics, which offered advice into how Kushner might best be able to divest his assets and comply with ethical requirements.
Gorelick also said that Kushner plans to recuse himself from "particular matters that would have a direct and predictable effect on his remaining financial interests."
"He will also abide by federal rules requiring impartiality in particular matters involving specific parties. These steps are consistent with federal law and executive branch practice and evidence Mr. Kushner's commitment to public service," Gorelick added in a statement provided by the Trump transition.
Ivanka Trump, meanwhile, is likely to simply retain the title of "first daughter" without taking on an official staff title, a transition official told CNN on Monday. The source said it hasn't been decided yet whether she will have a West Wing office and her specific portfolio likely won't be announced for a while.
But Trump is expected to make clear in the presser that his daughter will not be running his company while he is in the White House.
Even as the Trump transition is expected to announce how Kushner's appointment won't violate anti-nepotism laws, Kushner, who owns his own real estate development firm, has continued to chase deals that raise questions about conflicts of interest.
Kushner met with a powerful Chinese business magnate in the week after his father-in-law's election as he sought to finalize a deal for the purchase of one of his most prized properties on Fifth Avenue, the New York Times reported, raising ethical questions.
Neither Kushner nor Trump have publicly commented on the concerns of nepotism.
Kushner, who is an observant Jew, first took a role in his father-in-laws' presidential campaign advising him on US policy toward Israel and helped write the speech Trump delivered to AIPAC, the pro-Israel lobby.
But his role quickly ballooned from there as he became a hugely influential figure in his father-in-law's campaign, wielding power over much of the campaign's strategy and data operation.
Since then, Kushner has become a key adviser and power broker to the president-elect during the transation, serving as a point of contact for powerful business interests, foreign governments and other powerful figures.
Kushner and Ivanka Trump recently picked a Washington home to move into, making a role for Kushner in the White House almost inevitable.
CNN's Jim Acosta and Dana Bash contributed to this report.
The-CNN-Wire
™ & © 2017 Cable News Network, Inc., a Time Warner Company. All rights reserved.
Copyright 2017 Scripps Media, Inc. All rights reserved. This material may not be published, broadcast, rewritten, or redistributed.