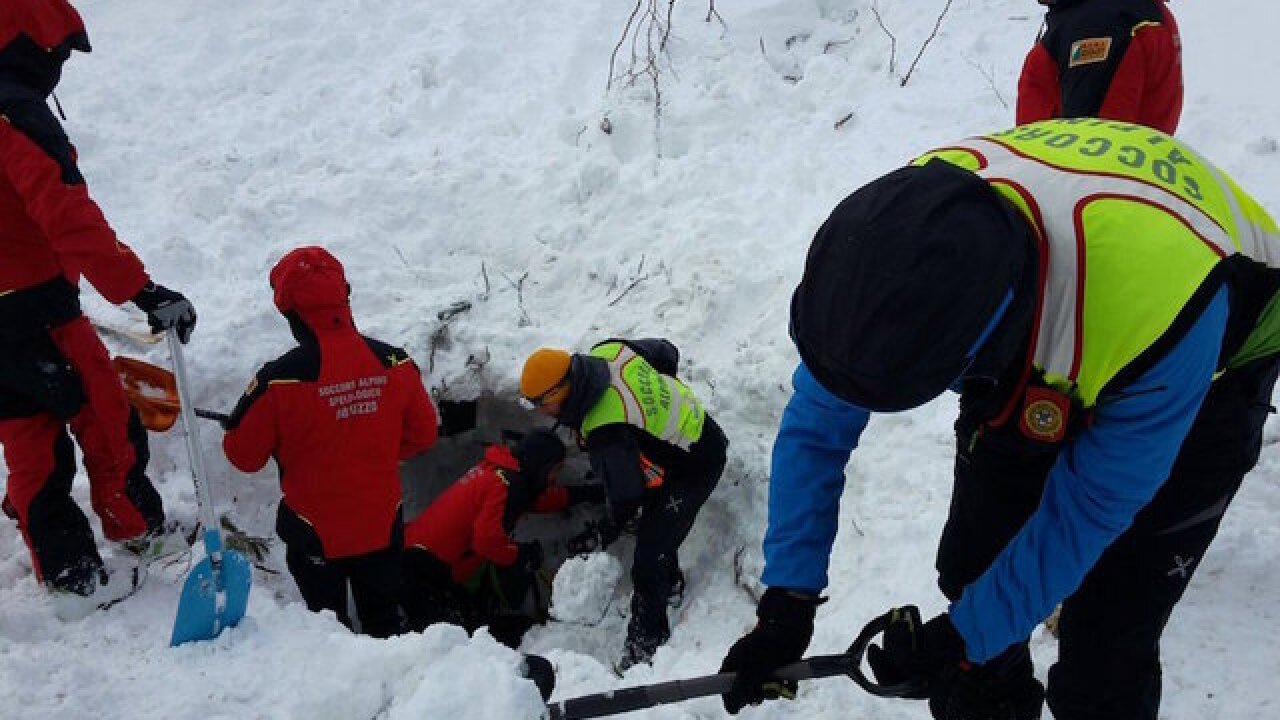 Copyright 2017 Scripps Media, Inc. All rights reserved. This material may not be published, broadcast, rewritten, or redistributed.
Italian Fire Department
<p>At least one person has died and many others are feared dead after an avalanche buried a hotel in central Italy following a series of earthquakes.</p>

By: CNN
Posted at 1:48 AM, Jan 20, 2017
PENNE, Italy (CNN) -- PENNE, Italy (CNN) -- Two people buried in an avalanche-hit Italian mountain hotel have been rescued, while another four survivors are still inside, according to Marco Bini from the Italian financial police's alpine rescue team.

Bini told CNN that the two people have been taken to hospital in nearby Pescara while rescuers work to retrieve the remaining four.

He also said that an additional two or three people have been found but rescuers are still not sure if they are alive.

Bini recounted how the six who were found -- 43 hours after the avalanche struck -- called out "angels, angels" when the rescuers first broke through to find them, in what was a highly emotional moment for all involved.

The breakthrough came when rescuers using search equipment located a small, open space Thursday night beneath an area of roof in the wreckage of the Hotel Rigopiano, Bini said.

The search was suspended for five hours in the early hours amid avalanche fears but when the search resumed Friday morning, the team heard voices after using a drill to punch a hole in the roof -- and then discovered the six survivors.

They were found, Bini said, "in an area of the hotel where there was an air pocket where they could breathe, luckily. They didn't light up a fire, but the snow above and below them protected them and kept a steady temperature even during the night."

All six showed signs of hypothermia but none have life-threatening injuries, Bini said. The four still trapped are receiving emergency medical treatment while rescuers work to extract them from the cramped space.

Authorities have yet to give a definitive number for those missing. But at least 20 people are thought still to be unaccounted for.

The rescue workers are trying to get any information they can from the four which might help to locate more people missing under the snow, Bini said.

Two of the six people found are children, Bini said, but it's not clear if either of them have been pulled out yet. Three children were thought to be among those trapped in the hotel.

The discovery of survivors has given new energy to the search and rescue teams, who are battling freezing conditions and failing light as they work to uncover the second spot where people have been found.

They are having to work with their hands much of the time because of the treacherous conditions, Bini said.

One of those found Thursday was Giampiero Parete, who was vacationing with his wife and two children, 6 and 8.

He said he missed being caught in the destruction only because he had walked to his car to get medicine for his wife just before the avalanche hit. It's not yet known if his wife and children are among the survivors found Friday.

The four-star hotel, at the foot of the Gran Sasso mountain about 135 kilometers (85 miles) northeast of Rome, was buried in snow Wednesday afternoon local time after a series of earthquakes.

Officials had said some people could have survived in air pockets within the building but hopes of finding anyone alive had been fading Friday before the news broke that six had been found.

Now the families of those missing are gathering in Pescara in hope of hearing that their loved ones have been pulled out alive.

Civil Protection services said that the hotel was in the process of being evacuated due to the earthquake when the avalanche hit. Guests had settled their bills and were waiting together in the lobby with their luggage.

Officials based estimates of the missing on guest registration and staff numbers. The hotel has 43 rooms and spa facilities, according to website TripAdvisor.

The fire department said the hotel had been "completely slammed" in the avalanche and debris was scattered as far as 100 meters from the hotel structure, making the search area large.

The force of the avalanche was so great that the hotel building has shifted 10 meters (11 yards) down the slope from its foundations, the Civil Protection Department said.

The deep snow combined with the earthquake created a perfect storm of sorts, exacerbating the aftermath of the quake.

"For the weather, you tell people to stay in their homes, while for the earthquake, citizens must be brought outside. Putting together these two elements is extremely complicated," Curcio said.

Access to the hotel has been difficult, but road crews cleared much of the snow and fallen trees by Thursday night, allowing heavy rescue equipment to reach the building.

Snow machines and helicopters had earlier taken searchers, including dogs, up the mountain.

Poor communications are complicating efforts by authorities to establish exactly who is missing.

All the guests are believed to have been local people who were taking advantage of discounted rates to stay in a normally pricey spa hotel before the peak February skiing season.

Rescuers were still trying to get to other areas isolated by the avalanche, Gentiloni said, and authorities were hoping to bring power back to as many as 90,000 people who were left in darkness overnight from the extreme weather.

Many people slept in shelters overnight Thursday to Friday despite the bitter cold and continuing snowfall because of the fear of more avalanches.