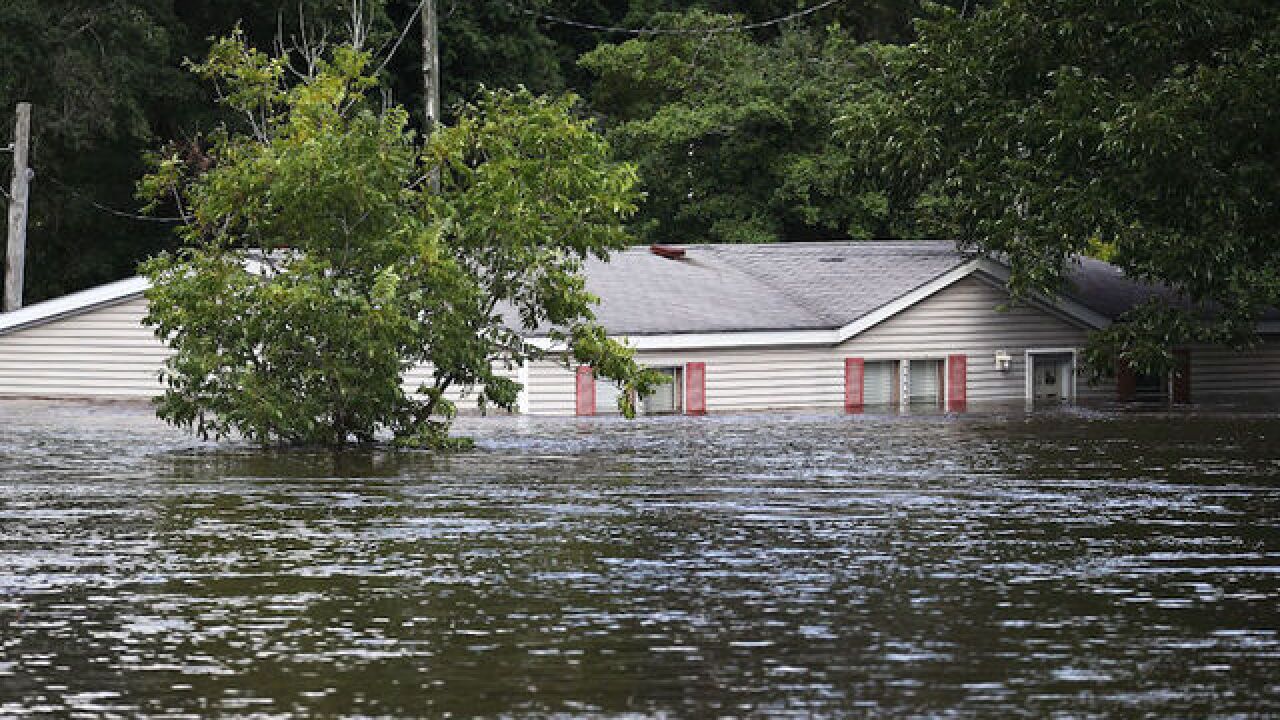 Image copyright 2018 Getty Images. All rights reserved. This material may not be published, broadcast, rewritten, or redistributed.
Joe Raedle
<p>Flood waters are seen around a home as the Little River over-flows its banks on September 17, 2018 in Spring Lake, North Carolina. Flood waters from the cresting rivers inundated the area after the passing of Hurricane Florence. </p>

Florence has left the Carolinas, but the death toll keeps rising as remnants of the storm generate rain, floodwater and tornadoes.

Now a post-tropical cyclone, Florence has killed 32 people, trapped hundreds more and cut off an entire city, officials said. Residential streets have turned into rivers, and freeways have morphed into waterways dotted with rescue boats. And the storm continues to wreak havoc.

The first Florence-related death in Virginia was reported Monday as a tornado associated with the storm's outer bands caused a building to collapse. And a burst dam caused more evacuations Monday night in Lilesville, North Carolina.

"This is a monumental disaster for our state," North Carolina Gov. Roy Cooper said Monday. "This is an epic storm that is still continuing because the rivers are still rising."

Florence will probably dump another 2 to 5 inches of rain on central and southeastern North Carolina, CNN meteorologist Michael Guy said. But even when the rain lets up, water gushing downstream is expected to cause "catastrophic and historic river flooding" for days across portions of the Carolinas, the  National Weather Service said.

'There will be flooding like we've never seen before'

That was the message from Wilmington Mayor Bill Saffo, whose city is  so deeply submerged that no one could get in  Sunday.

North Carolina authorities were able to open one road into the city of 117,000. But it's not for residents to use to return.

"We do not want evacuees to go back. There's too much going on," Cooper said.

The state's Department of Transportation said it's not clear how long that road will stay open, so authorities are trying to rush in supplies.

"We are pushing supplies as hard as we possibly can with the plan that (the road) may not sustain us over the next week," agency Secretary James Trogdon said.

And supplies such as fuel are in critical need.

The Wilmington-based Cape Fear Public Utility Authority urged residents to  fill bathtubs and containers with water  in case it doesn't have enough fuel to keep its water treatment plants running.

Evacuee loses car trying to get a flood victim food

He just moved to Wilmington a few weeks ago and already lost his car in the storm, he said.

"The reason why I lost my car is because there was a girl who hadn't had food, and I wanted to get her some food," Ammons said.

"I've been to three shelters so far," Ammons told CNN.

He said the stress is running high for evacuees who aren't sure how badly their homes are damaged. But he said perspective is important.

"You have to be grateful for what you have right now."

The flooding is so bad that North Carolina's transportation department warned people  not to travel in or through the state . Some interstates, including sections of I-95 and I-40, are impassible and  closed .

Emergency workers have made at least 1,000 swift-water rescues in North Carolina by early Monday,  the North Carolina Department of Public Safety said . But many more people need help.

And those trapped in floodwater could also be without power for days.

About 488,551 customers in North Carolina and 16,385 in South Carolina don't have electricity. But the number of actual people without power is far greater, since a single customer can represent an entire family.

In Lumberton, North Carolina -- a city submerged by Hurricane Matthew in 2016 -- residents were bracing for disaster as the Lumber River seeps through  a patched-up gap in the levee system .

The river is expected to crest around 25.7 feet. If it gets higher than 26 feet, "all bets are off," city public works Deputy Director Corey Walters said.

Already, the floodwater in Lumberton has engulfed Bill Kozak's home.

He said he's frustrated after dealing with two hurricane-induced floods in two years.

"It feels like there hasn't been much done to prevent this from happening," Kozak said.

Once he's done repairing flood damage from Florence, Kozak said, he and his family are moving out of Lumberton.

'Bring your pets with you!'

Some residents said they decided to stay because many emergency shelters don't accept pets. But those who left without their pets faced the wrath of passers-by and social media users.

Freelance journalist Marcus DiPaola tweeted that he helped rescue six dogs in Leland, North Carolina, after they were left locked in an outdoor cage.

"We got them out, but by the time we left, the water was so high that they would have drowned. BRING YOUR PETS WITH YOU!" he wrote.

Causes of death include drowning and fallen trees

Of deaths linked to Florence, 25 were in North Carolina, six were in South Carolina and one was in Virginia. They include:

-- Also in Union County, the body of an elderly man was found by his submerged car.

-- A 3-month-old who died when a tree fell on a mobile home in Dallas, North Carolina.

-- A man who died when a his truck hit an overpass support beam on Interstate 20 in Kershaw County, South Carolina.

-- A man who drowned in an overturned vehicle on a flooded road in Georgetown County, South Carolina.

-- A mother and a child who were killed when a tree fell on their house in Wilmington, North Carolina.

-- A woman in South Carolina who died after striking a downed tree while she was driving.

-- A woman went into cardiac arrest in Hampstead, in North Carolina's Pender County. When emergency responders tried to reach her, their path was blocked by fallen trees.

-- An 81-year-old man who fell and struck his head while packing to evacuate in Wayne County, North Carolina.

Where Florence's remnants will go next

What's left of Florence is dragging itself north, dumping heavy rain Monday as it moves into the southern Appalachian Mountains.

On Monday morning, Tropical Depression Florence was centered about 125 miles west southwest of Roanoke, Virginia,  the National Weather Service said . It was moving north at 13 mph, whipping up 30-mph winds.

Mountainous parts of southern Virginia are now at risk of flooding, mudslides and landslides due to Florence's heavy rains on Monday, said Guy, the meteorologist.

The storm is expected to move north through the Charlottesville, Virginia, area before heading toward the Ohio Valley, hitting West Virginia and western Pennsylvania.

By Tuesday, Guy said, "the remnants of Florence will be pushed towards the Northeast, where areas from northern Pennsylvania through central New York towards Boston could pick up some heavy rain."