Giuliani associate Lev Parnas said he was on a 'secret mission' for Trump, sources say 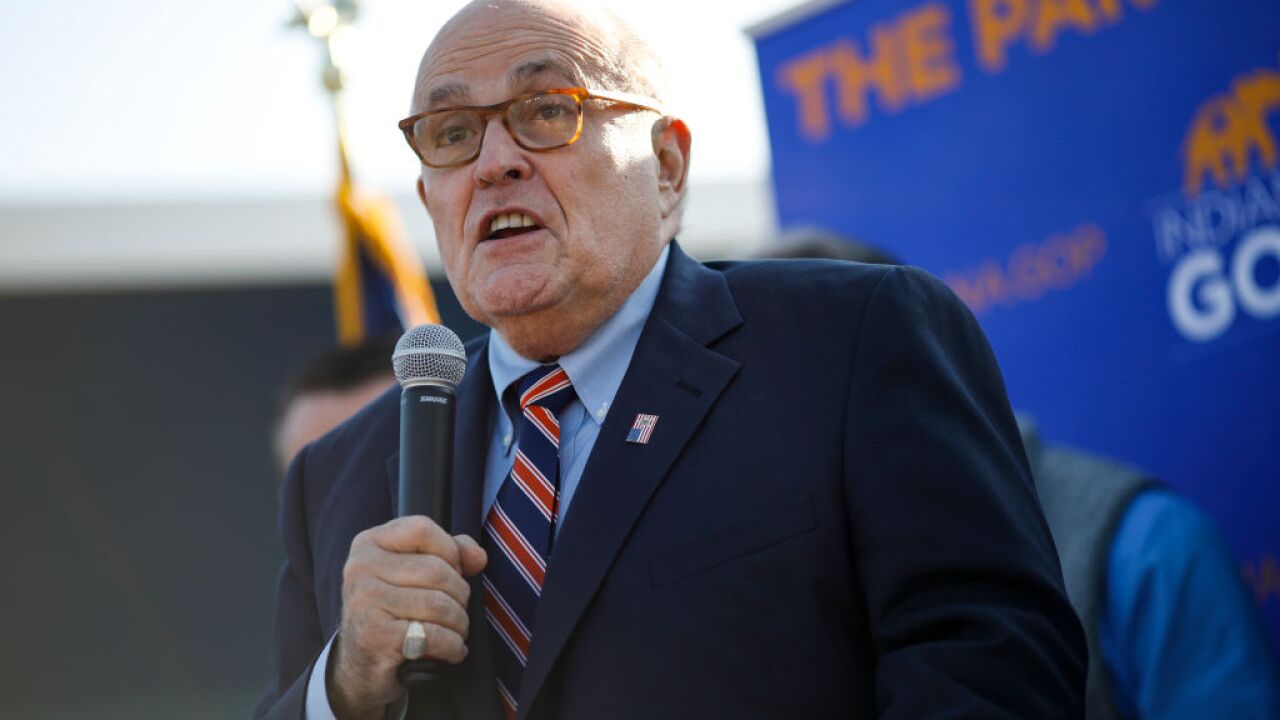 Among the many guests who had their pictures taken with President Donald Trump at the White House's annual Hanukkah party last year were two Soviet-born businessmen from Florida, Lev Parnas and Igor Fruman.

In the picture, which Parnas posted on social media, he and Fruman are seen smiling alongside Trump, Vice President Mike Pence and Rudy Giuliani, the President's personal lawyer.

At one point during the party that night, Parnas and Fruman slipped out of a large reception room packed with hundreds of Trump donors to have a private meeting with the President and Giuliani, according to two acquaintances in whom Parnas confided right after the meeting.

Word of the encounter in the White House last December, which has not been previously reported, is further indication that Trump knew Parnas and Fruman, despite Trump publicly stating that he did not on the day after the two men were arrested at Dulles International Airport last month.

Eventually, according to what Parnas told his confidants, the topic turned to Ukraine that night. According to those two confidants, Parnas said that "the big guy," as he sometimes referred to the President in conversation, talked about tasking him and Fruman with what Parnas described as "a secret mission" to pressure the Ukrainian government to investigate Joe Biden and his son Hunter.

In the days immediately following the meeting, Parnas insinuated to the two people he confided in that he clearly believed he'd been given a special assignment by the President; like some sort of "James Bond mission," according to one of the people.

To Parnas, the chain of command was clear: Giuliani would issue the President's directives while Parnas, who speaks fluent Russian, would be an on-the-ground investigator alongside Fruman, who has numerous business contacts in Ukraine.

"Parnas viewed the assignment as a great crusade," says one of the people in whom Parnas confided. "He believed he was doing the right thing for Trump."

The White House did not respond to repeated requests for comment to a series of questions regarding the meeting and Trump's relationship with Parnas and Fruman.

Giuliani, through his lawyer, Robert Costello, denies that any private meeting took place that night at the White House, saying it was a mere handshake and photo opportunity. Costello also rejects Parnas' claims of being put on a "James Bond" style mission, saying that Parnas is "no Sean Connery," and that he suffers from "delusions of grandeur."

Joseph A. Bondy, a lawyer for Parnas, told CNN, "Mr. Parnas at all times believed that he was acting only on behalf of the President, as directed by his personal attorney, Rudy Giuliani, and never on behalf of any Ukrainian officials."

A lawyer for Fruman declined to comment for this article.

In the past, Giuliani has been circumspect about how he became associated with Parnas and Fruman. In previous conversations with CNN, Giuliani has refused to identify his contact, saying simply that a "well-known investigator" connected him with Parnas.

And in February this year, according to a report in the Wall Street Journal, Parnas and Fruman met with the Ukrainian President Petro Poroshenko and then Prosecutor General Yuriy Lutsenko. During that meeting, they extended Poroshenko an invitation for a State dinner at the White House, if he would commit to publicly opening investigations in Ukraine.

The December meeting at the White House is not the first report of Parnas and the President discussing Ukraine. The Washington Post has reported that in April 2018 at a small fundraising dinner in a suite at the Trump International Hotel in Washington, Parnas told Trump that the US ambassador to Ukraine, Marie Yovanovitch, was unfriendly to him and his interests. Trump, according to the Post report, which cited people familiar with Parnas' account of the event, suggested that Yovanovitch should be fired.

A year later in May 2019, Yovanovitch was recalled from her post.

A separate encounter -- also not previously disclosed -- between Parnas and the President could provide further evidence that Parnas and Trump knew each other. In August 2018, months before the White House Hanukkah party, Trump traveled to upstate New York to attend a fundraiser for then- Republican congresswoman Claudia Tenney.

Among the handful of wealthy donors in attendance was Parnas. Photos viewed by CNN provided by two of the attendees feature Parnas mingling with people and having his picture taken alongside Trump. Both attendees said they got the impression that Trump and Parnas knew each other. During a Q-and-A session, Trump called Parnas by his first name, though they did have nameplates in front of them.

One of the sources said Parnas seemed quite proud of his interaction with Trump.

These meetings add further understanding of the extent to which Parnas and Fruman, aided by Giuliani, entered into the President's inner-circle. CNN has recently reported that since 2014 there are eight documented times when Parnas and the President were with each other, including taking pictures together at campaign events and attending high-dollar fundraisers.

Parnas, a prolific user of social media, tended to post those encounters with Trump. But the photo of Trump and Parnas together at the White House in December is the last encounter that Parnas posted of himself with the President.

The two sources who Parnas confided in about the Hanukkah meeting at the White House tell CNN that they were often with Parnas over the past eighteen months, and that he "worshipped" the President.

However he felt back then, those two sources say Parnas now feels quite differently about Trump. The day after Parnas and Fruman were arrested on October 9 and charged with criminal campaign finance violations, Trump publicly denied ever knowing them, a move that was enormously upsetting to Parnas, according to three sources close to him.

"I don't know those gentlemen," Trump told reporters from the South Lawn of the White House on October 10. "Maybe they were clients of Rudy. You'd have to ask Rudy, I just don't know."

In the weeks since his arrest, Parnas has become disenchanted with Trump, these sources say. He's even signaled that he's willing to cooperate with the Congressional impeachment inquiry. Parnas' lawyer Bondy said his client would comply with a Congressional subpoena for documents and testimony as part of the impeachment inquiry in a manner that would allow him to protect his Fifth Amendment rights against self-incrimination.

Both Parnas and Fruman have pleaded not guilty and are currently out on bail and on house arrest in Florida awaiting trial. Both men also have a history of being accused of wrongdoing in civil court filings, though they were never criminally charged. One allegation against Parnas from 2008 involves a man who says he was threatened by Parnas after the man accused him of squatting in his Sunny Isles Beach condo. Parnas denied making the threat and told police he'd been renting the condo without a lease based on a verbal agreement with the man.

Fruman's estranged wife, Yelyzaveta Naumova, accused him during their divorce proceedings of beating her and possessing a large amount of cocaine and other drugs, which he allegedly wrapped and passed out as party favors. Fruman denied the allegations

Parnas' relationship with Giuliani and Fruman has also been strained, Parnas' two confidants tell CNN. That's a far cry from the days when the trio frequently met at the Trump Hotel and chartered a flight together .

Last December, the day before the Hannukah meeting at the White House, Giuliani brought Parnas as his guest to the funeral of former president George H.W. Bush.

Now, Giuliani and Parnas snipe at each other through their lawyers.

Unlike Fruman, Parnas is no longer represented by one of the President's former lawyers, John Dowd. "Igor has much more money than Parnas and can afford a strong defense team," says one of their confidants, trying to explain the split.

Meanwhile Parnas is trapped without his phones (in the possession of the government) in his house in Boca Raton, Florida. His former friends don't reach out, not wanting to get involved in the multiple investigations that plague him.

"In a strange way I feel sorry for Lev, for the mess he is now in" says one of his confidantes. "He never thought he did anything wrong; he was working for a President he really believed in. He was a hustler but also a nice man who gave people nice gifts. I would think all this is deeply upsetting for him."