From Obama to Trump, from Mars to Venus 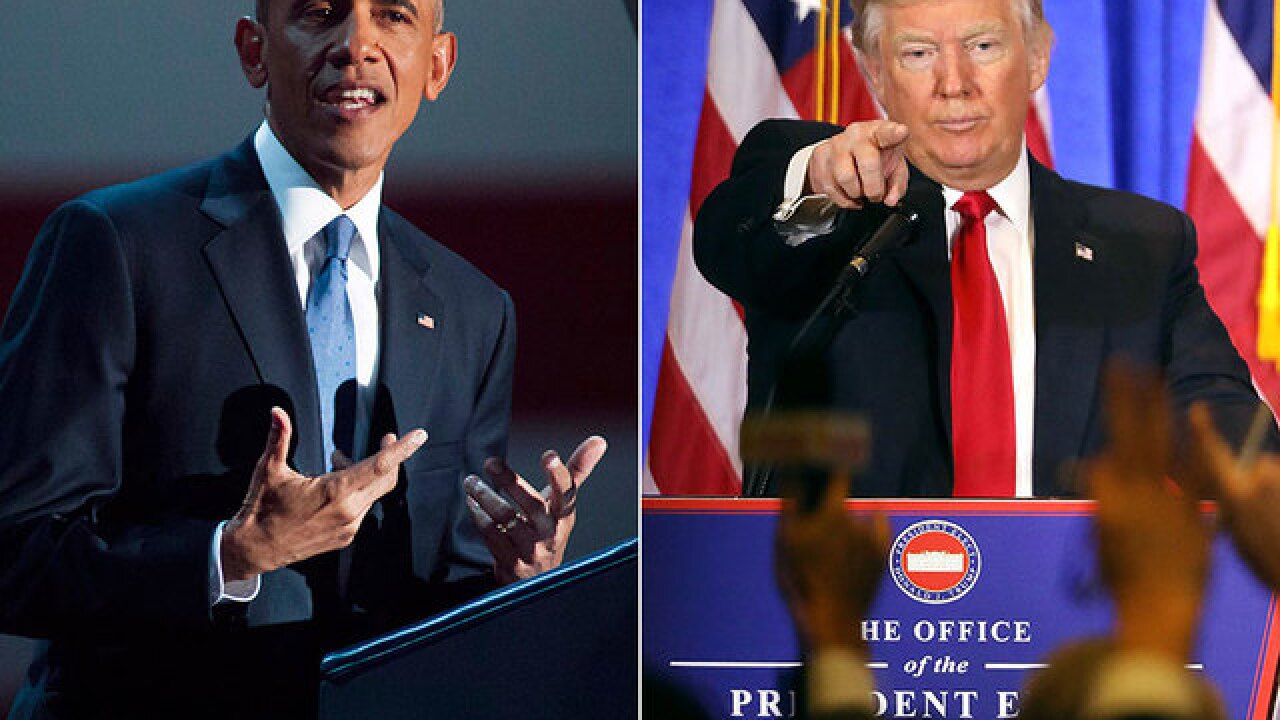 It’s the paradigm shift of all paradigm shifts. It’s worlds colliding. It’s the ultimate political non sequitur. It’s not a plausible twist in the plot.

Never have two presidents in a row been as different in background, temperament, philosophy and style as are Barack Obama and Donald Trump.

A succession so strange begs the question:  How has America changed so much in only eight years that this topsy-turvy turnabout makes sense?

Suppose a team of genius historians, economists, generals, doctors and so forth had been locked in a Rip Van Winkle isolation station on January 1, 2009, and released on January 1, 2017.  Would they conclude that America had changed in major, concrete ways in these eight years, this blip in history? Obviously not.

Certainly, the financial crisis that dominated 2008-9 is over and so is the panic Americans’ felt.  But at the fundamental level, the economic situation of the vast majority of Americans  — their real income, purchasing power, savings levels, debt levels and employment rates — has not changed very much.

Far fewer Americans are at risk in foreign conflicts now, but the basic geopolitical map of the world has changed little and improved little from the U.S. perspective.  Chaos and tragedy still grip much of the Middle East. Russia aggressively annexed the Crimea. Islamic terrorism continues and Americans’ fear of terrorism has not wavered much from the days after 9/11.

Violent crime rates have declined in these eight years; more Americans have health insurance, though many object to the cost; life expectancy continues to increase for all demographic groups except middle age, lower-income whites.

This is not a portrait of the kind of dramatic upheaval that dots our history: the Civil War didn’t end; the Great Depression didn’t start; World War II wasn’t won; political assassinations and protest riots didn’t destabilize society as they did in 1968.

The world’s facts, figures, maps, health and balance of power evolved at a normal pace over eight years. Perceptions did not.

It feels like 2017 is generations away from 2009, that Obama was a leader for a different nation in a different era than Trump. But the real world is not so very different.

Perhaps the explosion of new tools we use to perceive “reality” have changed the equation.

President Obama in his farewell address warned that increasingly we “retreat into our own bubbles, whether in our neighborhoods or college campuses or places of worship or our social media feeds, surrounded by people who look like us and share the same political outlook and never challenge our assumptions.”

Most Americans spend extraordinary amounts of time engaged with revolutionary new media products that seem to be habit forming. Spending hours every day focused on screens and devices is a brand new human activity. Who knows how that affects us?

Whatever the cause, some new issues and arguments were prominent in 2016 and illustrate how our lenses may have changed more than the landscape.

Economy: From crisis to chronic

Despite the historic significance of being America’s first black president, the supreme mission of the new commander-in-chief was to defeat the Great Recession. That meant rescuing collapsed financial institutions and the auto industry, stemming the flood of foreclosures, trying to create jobs and lead the country away from more panic.

The expectations put on the charismatic new president were high, hopeful and completely unrealistic. The country avoided a Depression and fared better than any other large Western economy. That was slim comfort to many Americans.

In the next eight years, experts in finance, government and academia recognized that though the crisis passed, the American economy had been mired in a stealth period of slow and very uneven growth since the 1980s.  Workers and consumers knew that intuitively. Congress and the parties did not, or chose to ignore what came to be labeled the New Normal — the era of slow growth.

In the 2000s, economists Thomas Piketty and Emmanuel Saez made headlines by showing that economic inequality in the U.S. was greater than at any time since the 1920s. Economic inequality became a full-blown political cause during the financial crash and the mantra of the “Occupy Wall Street” movement.

Along the same track, leaders of the Federal Reserve and some politicians drew attention to new historical data showing that for a vast slice of the middle of the country, real income and wealth had stagnated or even declined steadily since the1980s. The parties loudly blamed each other but failed to come up with any type of comprehensive, sensible response.

Ironically, no candidate seemed to get this more clearly than a billionaire icon of wealth and opulence, Donald Trump. Trump connected with Americans who believed they were being shafted by a permanently rigged and failed economy, not some fleeting financial crisis. They also were certain that “normal” politicians were useless — with good reason.

Minority communities that had been at the bottom of the economic ladder for generations, however, felt attacked and scapegoated by Trump. But enough white voters ate it up to elect Trump.

America’s economic problems now are broadly seen as a chronic, deadly condition, not a passing crisis.

On a parallel track, an array of economic remedies that were on the far fringes in 2009 are now center stage, thanks to Donald Trump. Together, they make up an approach dubbed economic nationalism. Core policies include protectionism, dramatically reduced immigration, a frugal view on spending American dollars to help defend allies and security alliances (i.e. NATO), and high profile, punitive PR attacks on certain U.S. companies investing abroad.

None of these were in the debates about taming the Great Recession. They were and are anathema to the Establishments in both parties. Indeed, Trump’s fluid economic combo-platter has more in common with Bernie Sanders’ platform and Europe’s right wing conservative populist movements.  Long-simmering fears about globalization jumped from the far left to the far right to the working class living between the coasts and throughout Europe.  Now there is plausible concern over a global surge of economic nationalism and its champions, authoritarian populists. This wasn’t on the American radar in 2009.

Whichever elements of Trump’s economic nationalism become administration policy, our economic debate has been distinctly reframed — at least, for now.

Optimism and even confidence that race relations might take a giant leap forward was palpable in January 2009. Americans of all stripes reported that to pollsters.

Eight years later, it’s a different reality — or a different worldview.  More Americans think race relations are bad, especially blacks. Michael Brown, Freddie Gray, Eric Garner and Alton Sterling:  These are only a few cases where police killed black men under controversial, brutal or scandalous circumstances. The summer of 2015 brought large protests and some riots; an explosion of unrest and rage seemed imminent. For much of the country, the conflict was literally and simply black and white. Cops good, cops bad: black men statistically proven to be dangerous, black men persecuted from youth on because of the skin color.

It was a level of racial tension, conflict and hopelessness light years away from Obama’s Inauguration.

Another issue that was invisible in 2009 but pressing today is the epidemic of opioid addiction. It’s a situation that symbolizes or reflects other social problems and inequities.

The opioid crisis, however, is being handled as a health crisis. Treatment not jail is the preferred remedy. That is probably smart policy, but many experts and civil rights professionals say it also reveals a tragic injustice. Heroin and crack were considered to be “black” drugs and the response was criminal.  Opioids, often introduced by doctors to patients, are considered to be “white” drugs and the response is sympathetic and medical.  In a sense, opioid addiction is the poster problem of the disadvantaged, forgotten white working class.

Despite the rampant economic anxiety eight years ago, Obama was enormously popular before his inauguration. A towering 79 percent had a favorable impression of the incoming leader; only 18 per cent disapproved.

A new Washington Post-ABC News poll finds, “President-elect Donald Trump will take the oath of office Friday as the least popular incoming president in at least four decades…” Just 40 per cent view Trump favorably while 54 per cent have unfavorable impressions. He is the first president in memory to begin underwater.

Does that have any predictive value? Well, Obama’s rock star popularity declined swiftly and never again reached his early heights.  As for Trump, his political odyssey has relentlessly defied prediction.

Who could have envisioned a true picture of America in 2017 back in 2009?  Maybe Donald Trump.