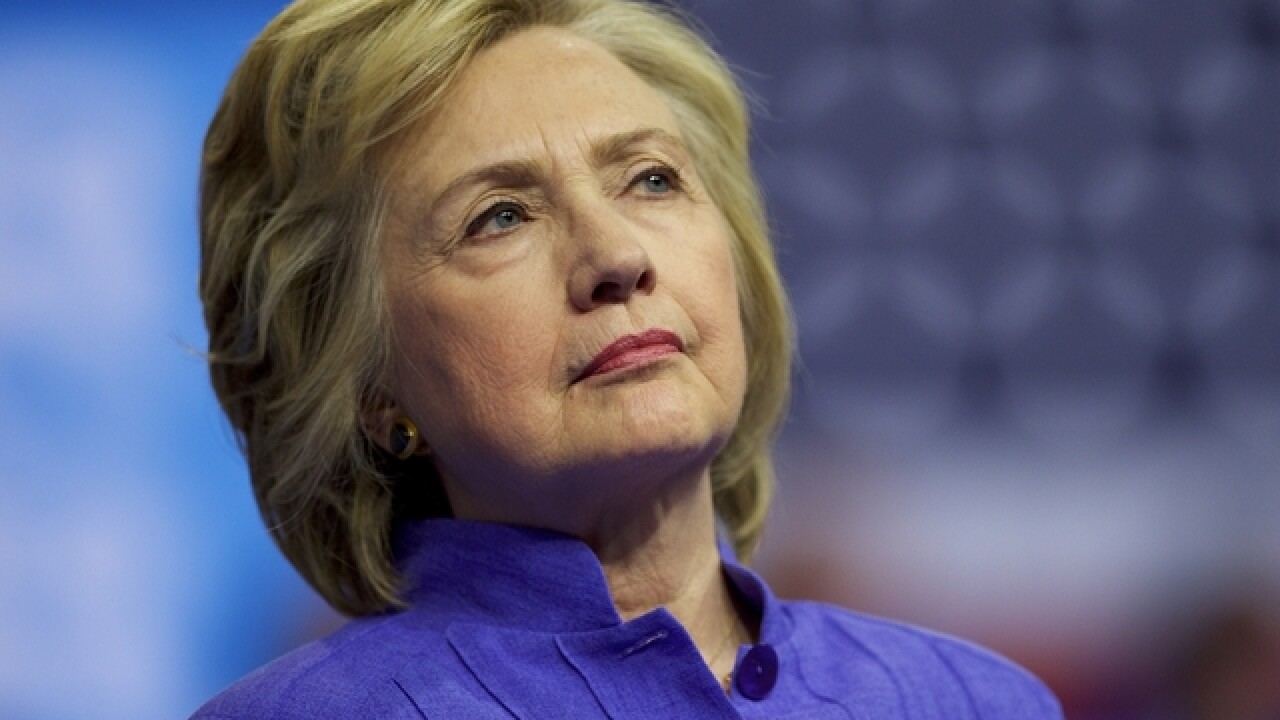 CLEVELAND (AP) — In an extraordinary last-minute twist to a volatile campaign, FBI director James Comey lifted the cloud he had placed over Hillary Clinton, saying Sunday the bureau had found no evidence in its hurried review of newly discovered emails to warrant criminal charges against her.
Comey's move capped a stunning chapter in the bitter, deeply divisive contest between Clinton and Republican Donald Trump. The director's initial decision to make a renewed inquiry into Clinton's emails public on Oct. 28 upended the campaign at a crucial moment, sapping a surging Clinton's momentum and giving Trump fresh ammunition to challenge her trustworthiness.

FBI Dir just informed us "Based on our review, we have not changed our conclusions that we expressed in July with respect to Sec Clinton"

Clinton's campaign, furious at Comey's handling of the review, welcomed Sunday's announcement. Communications director Jennifer Palmieri told reporters, "We're glad this matter is resolved," though Clinton herself did not mention the issue during a rally in Ohio with basketball superstar LeBron James.
The new review involved material found on a computer belonging to Anthony Weiner, the disgraced former congressman and estranged husband of Clinton aide Huma Abedin. While Comey was vague in his initial description of the inquiry, he said Sunday that the FBI reviewed communications "to or from Hillary Clinton while she was secretary of state."
Based on that review, Comey told lawmakers the FBI was not changing the conclusion it reached this summer. Then, Comey said, "no reasonable prosecutor" would recommend Clinton face criminal charges for using a private email system while at the State Department.
Trump, campaigning in Michigan, challenged the FBI's ability to review the newly discovered emails so quickly and argued Clinton was being protected by a "rigged system."
"Hillary Clinton is guilty. She knows it, the FBI knows it, the people know it," Trump declared. "Now it's up to the American people to deliver justice at the ballot box on Nov. 8."
In financial trading Sunday evening, Dow Jones index futures jumped about 200 points ahead of Monday's stock market opening on news of Comey's announcement. The stock market, which is allergic to uncertainty close to Election Day, wilted after Comey's notification to Congress in late October.
The FBI began investigating the handling of classified material on Clinton's private email server shortly after she announced her bid in April 2015. The issue has dogged Clinton's campaign and contributed to the questions a majority of Americans have about her honesty and trustworthiness.
Still, Clinton had appeared to be heading for a sweeping victory before Comey's first letter to lawmakers, in which he stressed the FBI could not yet assess "whether or not this material may be significant," or how long it might take to run down the new investigative leads.
Since then, national polls and those in battleground states indicated a tightening race for the White House and for several competitive Senate seats. Democrats need to pick up four seats if Clinton wins to take back control of the chamber.
"The October surprise that came only 11 days before Election Day has unfairly hurt the campaign of one candidate and changed the tenor of this election," Sen. Dianne Feinstein, D-Calif., said in a statement.
Clinton still appears to hold an edge over Trump in the campaign's final stretch. The Republican has a narrow path to victory that requires him to win nearly all of the roughly dozen battleground states up for grabs.
The candidates spent Sunday sprinting across swing states as they sought to lock up support ahead of Election Day. As the campaign's final weekend drew to a close, more than 41 million Americans had already cast their ballots in early voting.
During remarks at a black church in Philadelphia on Sunday morning, Clinton urged voters to choose "unity over division" as she sought to close a caustic presidential campaign on an uplifting note. She warned that President Barack Obama's legacy is on the line, part of her strategy to shore up black voters who may be less enthusiastic about her than the president.
"If we come together with the common vision, common faith, we will find common ground," Clinton declared.
Following her rally in Ohio, Clinton headed to New Hampshire with Khizr Khan, the Gold Star father who delivered a stinging indictment of Trump at the Democratic convention. Her high-wattage allies also fanned out across the country, including President Barack Obama, who was joined by musical icon Stevie Wonder at a rally in Florida.
Trump opened a furious day of campaigning in Iowa, the battleground state where he appears strongest. He was also making stops in Minnesota, Michigan and Pennsylvania, three states that have reliably voted for Democrats in presidential elections, as well as Virginia, a state Clinton's campaign believes it has a solid hold on.
Trump's campaign manager Kellyanne Conway told reporters Sunday that Trump planned to keep up the breakneck campaign pace through Election Day. After voting in New York Tuesday morning, Trump was expected to return to Pennsylvania, Michigan, Ohio, North Carolina and New Hampshire later in the day, Conway said.
The businessman was also facing criticism for a new ad that asserts the "establishment has trillions of dollars at stake in this election" and features photos of billionaire George Soros, Federal Reserve Chair Janet Yellen and Goldman Sachs chief executive Lloyd Blankfein, all of whom are Jewish.
The National Jewish Democratic Council said the ad's use of anti-Semitic stereotypes is "shocking and dangerous." Trump's campaign pushed back, saying the criticism of the ad was "completely false and uncalled for."
Copyright 2016 The Associated Press. All rights reserved. This material may not be published, broadcast, rewritten or redistributed.