Megan "Maggie" Boswell, 18, the mother of Evelyn Mae Boswell, was arrested Tuesday night. She's being held on a $25,000 bond.

An Amber Alert was issued for Evelyn last week, but she has been missing from her northeast Tennessee home since December.

Sullivan County Sheriff Jeff Cassidy said in a press conference he thinks Evelyn is still alive. He also said some of the information from Boswell isn't adding up.

Maggie Boswell said she had someone whom she trusted watching Evelyn while she was at work. She said she didn't call the police after that person disappeared.

Earlier in the day, Boswell spoke with WJHL-TV in Johnson City, Tennessee, and said she is pregnant and unable to take a polygraph test, even though Sullivan County authorities say they haven't asked her to take one. She also said her mother took Evelyn to a campground in Virginia and that if the Tennessee Bureau of Investigation (TBI) doesn't go to the campsite, she will. However, investigators say they did search the area and found nothing.

"She is the sweetest baby you will ever meet and will smile and want to hug you when you see her," the post read. 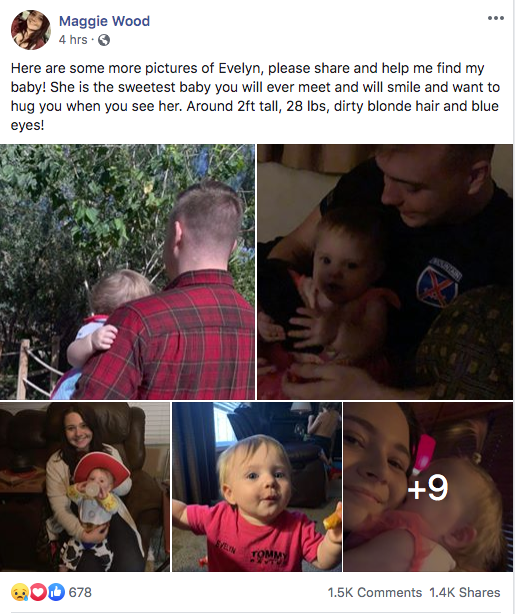 A $56,000 reward is being offered in the case. Anyone with information on where she might be is asked to call 1-800-TBI-FIND. The TBI says they've received more than 500 tips, but there's still no sign of the child.

This story was originally published by Blayke Roznowski on WTVF in Nashville.