Donald Trump Inauguration Day schedule: What you need to know 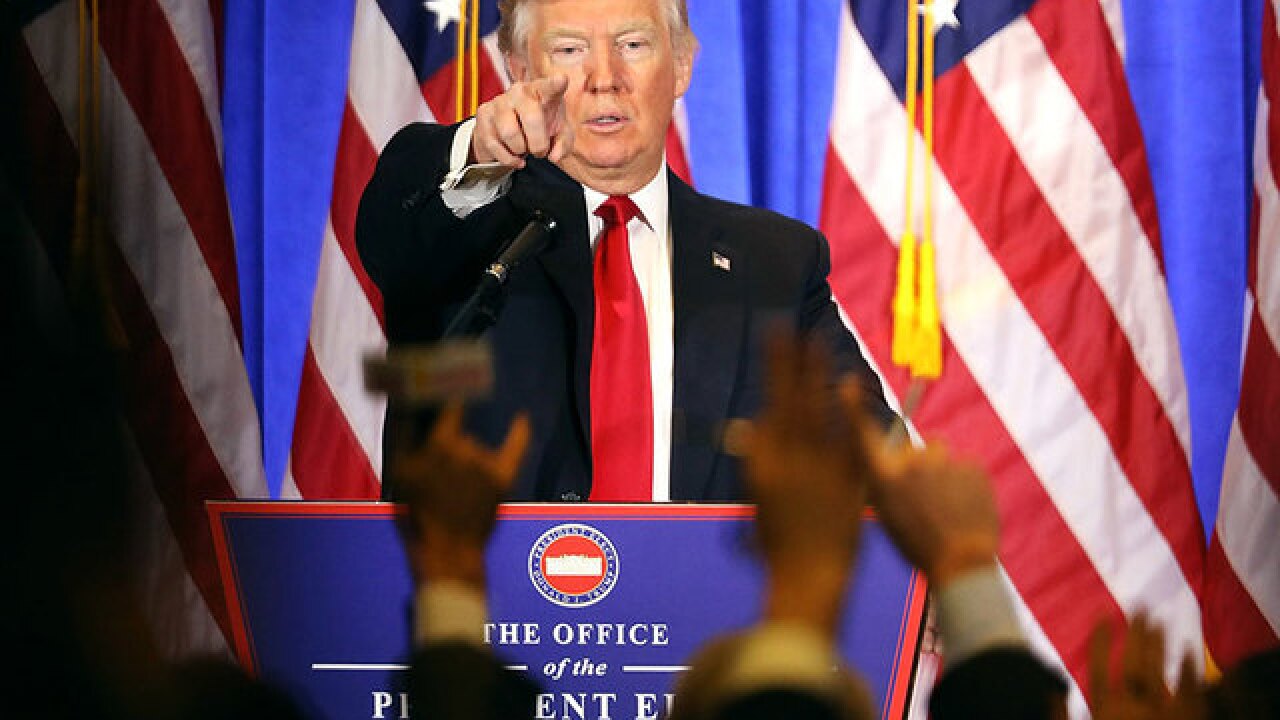 Image copyright 2017 Getty Images. All rights reserved. This material may not be published, broadcast, rewritten, or redistributed.
<p>President-elect Donald Trump speaks at a news cenference at Trump Tower on Jan. 11, 2017, in New York City. This is Trump's first official news conference since the November elections. (Photo by Spencer Platt/Getty Images)</p>

By: CNN
Posted at 2:48 AM, Jan 20, 2017
(CNN) -- Welcome to Inauguration Day where Donald J. Trump will be sworn in as the 45th President of the United States. Here's what's on his schedule:
All times EST
8:30 a.m. President-elect Trump will attend a church service with his family. Vice President-elect Mike Pence and his family will also join the soon-to-be first family along with Cabinet designees, other family members and friends.
Where? Saint John's Church, across the street from the White House.
9:30 a.m. Trump will attend a White House tea reception hosted by President Barack Obama and First Lady Michelle Obama. Pence and his family will also be in attendance.
Where? South Portico of the White House
10:30 a.m. The President-elect and his family will travel to the US Capitol for the swearing in ceremony.
Around noon President-elect Trump and Vice President-elect Pence will be sworn in. Their families, the Obamas, members of Congress and the US Supreme Court justices will be among the attendees.
The ceremony concludes and President Trump and Vice-President Pence will bid farewell to the Obamas and the Bidens. The Obamas will then board "Executive One."
Where? West Lawn of the US Capitol
1:00 p.m. President Trump, Vice-President Pence, Melania Trump and Karen Pence will attend a joint congressional inaugural committee luncheon.
Where? The US Capitol
2:30 p.m. The President and Vice-President will attend a military review.
Where? US Capitol on the East Front
3 p.m. Trump and Pence, along with their families will attend the inaugural parade in stands just outside of the White House.
7 p.m. President Trump, Vice-President Pence, Melania Trump and Karen Pence will attend the Liberty and Freedom Ball.
Where? The Washington Convention Center off Mount Vernon Ave.
After the Freedom Ball they will attend the Military Ball.
Where? National Building Museum
The-CNN-Wire
™ & © 2017 Cable News Network, Inc., a Time Warner Company. All rights reserved.
Copyright 2017 Scripps Media, Inc. All rights reserved. This material may not be published, broadcast, rewritten, or redistributed.